Garibaldi at Squamish a focus as board considers major amendment
Feb 21, 2018 5:00 PM By: Dan Falloon 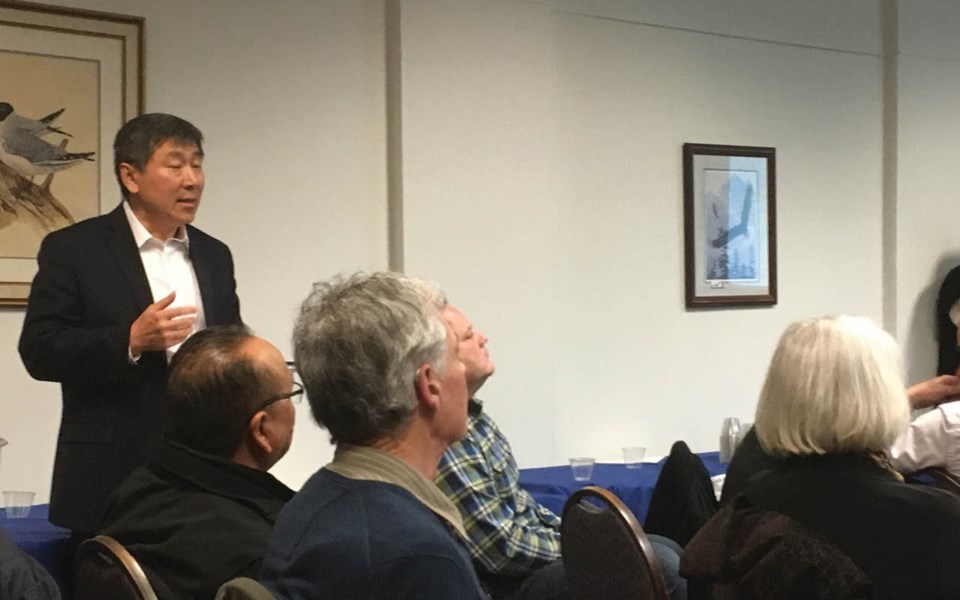 A passionate crowd packed the Eagle Room at Squamish's Sea to Sky Hotel on Feb. 19 as the Squamish-Lillooet Regional District (SLRD) held a public hearing to receive feedback on its proposed amendments to the Regional Growth Strategy (RGS).

The amendments come as the SLRD undertakes its provincially mandated five-year review of the RGS.

The most contentious change involved the board's proposal to remove destination resort language from the RGS. Despite SLRD board chair and Resort Municipality of Whistler councillor Jack Crompton's assurances to the contrary, a number of attendees interpreted the potential move as a barrier to the proposed Garibaldi at Squamish (GAS) ski resort project — for better or for worse. GAS is a $3.5-billion all-seasons ski resort set to be built on Brohm Ridge, 15 kilometres north of Squamish.

Crompton also explained the destination resort language in the RGS is "descriptive language" and "not a framework" for any potential development.

One speaker, Janice Brown, said it is "disingenuous" to remove the language while a destination resort project is in development. Others expressed concern that the section's removal could hinder projects other than GAS, while Brackendale resident Jeff Levine of Sea to Sky Adventure Company said any potential future disputes would be harder to arbitrate with the language removed.

Those who spoke were nearly all from the Squamish area. Clear GAS supporters bemoaned challenges with Whistler Blackcomb such as traffic en route and the perception that it's not family friendly, while the resort would also provide a significant boost to Squamish's winter tourism offerings while providing a significant number of jobs. Others felt that, at the least, if removing the destination resorts language ends up impacting the project, it's unfair that the District of Squamish won't have the final say over its fate.

Squamish's Dwayne Kress, who organizes the Spakwus 50 bike race, explained he thinks the change will take away an opportunity for the town.

"We are, as a town, hemorrhaging tourist money to another community," Kress said. "It's very well known that Whistler doesn't want the brown-bag lunch (tourists). They now don't want the traffic."

Chief Dale Harry of the Squamish Nation spoke out against the amendment. The Nation reached an agreement with GAS in 2007 after years of negotiation.

He said the SLRD has not discussed the proposed amendment with the Squamish Nation.

Those who opposed the GAS project highlighted issues like traffic, lack of affordable housing for workers, while some pondered whether there was enough snow for a resort, if the slope is appropriate for skiing and snowboarding, and what recreational opportunities, like snowmobiling, might be affected if it goes forward.

"We should still have areas to play in. We shouldn't develop everything," area resident Mike Rafferty said.

As well, one speaker opposed GAS using the Paradise Valley water source. Paradise Valley resident Brenda Bjorkman presented a petition with over 200 signatures opposing the resort's proposed use of the community's aquifer.

GAS vice-president of planning Rod MacLeod said during the hearing the developers would look at alternative water sources.

GAS president Jim Chu added if Paradise Valley ends up being the source, their priority would be the lowest.

"If we have to take from the aquifer, we're last in, first out," he said.

MacLeod added that if the SLRD amendment was approved, it would send the project "back to the drawing board" as it would affect a condition of provincial approval."One of those approvals is local government support, and local government is now changing the rules in the middle of our process," he said. "We have the support of all sorts of government agencies. This project will offer significant economic, social and environmental benefits to the region."

GAS is also in contact with the District of Squamish and hopes to present its new master plan, which considers such factors as the results of the environmental assessment process and other feedback, at a Committee of the Whole meeting.

MacLeod added the provincial approval process would be referred back to local governments before a Master Development Agreement is produced.

The Feb. 19 meeting was not initially part of the SLRD's plan after a previous public hearing was held at the SLRD's offices in Pemberton in September. However, after hearing that several people still wanted to make their voices heard, the SLRD opted to hold a second public hearing in Squamish rather than adopt the changes at a meeting last month.

The meeting was advertised in both Pique and the Squamish Chief, on the SLRD Facebook page and its website, but several residents noted they hadn't heard about it until the last minute, with one saying she received word from the Squamish Chamber of Commerce earlier in the day.

Another asked for an extension to submit written feedback, as the board's policy does not allow it to receive any submissions after the hearing adjourns. There were no written submissions prior to this hearing while the hearing immediately preceding it regarding Black Tusk Helicopters' rezoning request at Echo Lake had 58.

"The public engagement strategy for the regional district needs review if not this time, next time around for sure," said Eric Andersen of the Squamish and District Forestry Association.

The amendment was first proposed as a minor amendment, but after learning of Squamish Nation's opposition to it, the SLRD changed it to a major amendment to allow a more rigourous approval process.