Forecast calls for more snow in the coming days along Sea to Sky corridor
Feb 18, 2014 6:00 AM By: John French 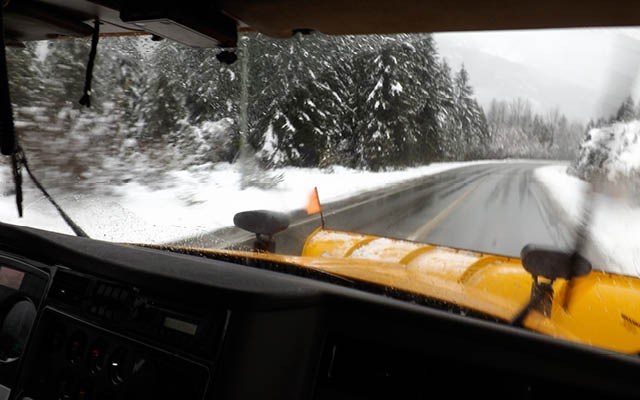 SNOWED IN Winter’s return to Whistler is expected to keep road-clearing crews busy for the next few days. Photo by John French

Winter has finally arrived along the Highway 99 corridor and it is making it difficult to get around. The forecast is calling for snow in Whistler through to late Wednesday, Feb. 18.

The winter weather ahead comes following a Sunday evening storm that produced a long closure of Highway 99 in the Cheakamus Canyon. At least three vehicles were involved in a crash after conditions on the highway became very slippery after 5 p.m. The road was closed while a tow truck moved the crashed vehicles out of the way and highway maintenance crews plowed the area. It took almost three hours to clear the crash and reopen the highway.

No serious injuries were reported from the crash.

While the route was closed the RCMP and the B.C. Ambulance Service encouraged drivers to stay off the highway until the volume cleared and weather conditions improved.

With snow falling again on the route and the snow expected to continue for the next few days drivers are being encouraged by the provincial government’s transportation ministry to be prepared for the conditions. A drive safe website was set up by the province in partnership with WorkSafe BC, the Justice Institute of B.C. and the B.C. Road Builders. The website is found at shiftintowinter.ca and the groups behind the campaign are sending out constant Twitter reminders tagged with #ShiftIntoWinter.

Advice on the website includes messaging around winterizing your vehicle, planning ahead, leaving early to allow extra arrival time and carrying an emergency survival kit.