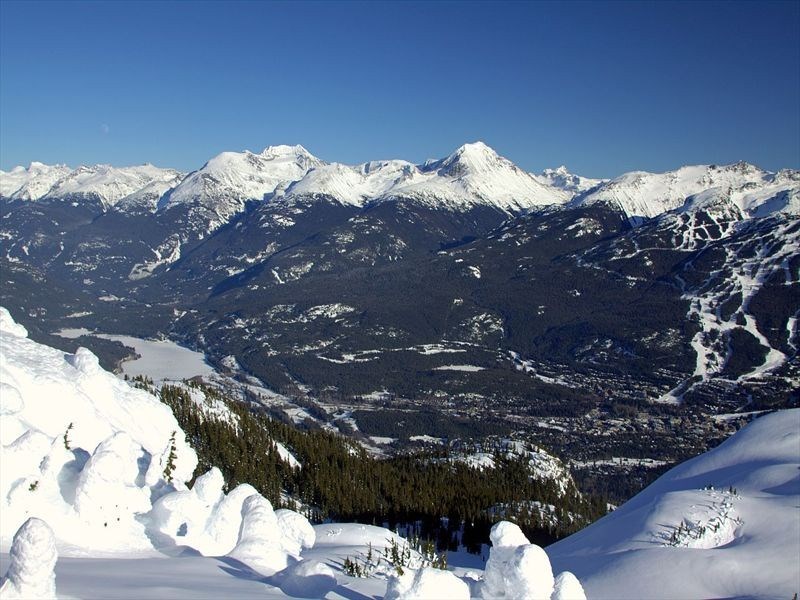 The view from the top of Sproatt Mounain, the site of a snowmobile accident last week. File photo

A snowmobiler was rescued after falling down a creek bed on Sproatt Mountain last week, police said.

Last Tuesday, March 12 at around 6:30 p.m., Whistler RCMP responded to a call for assistance from the snowmobiler, who said he had been sledding when he “fell into a hole, with the sled landing on top of him,” police relayed in a release.

According to Whistler Search and Rescue (WSAR) manager Brad Sills, a local snowmobile operator in the area was alerted to the fall and managed to extract the man from the creek bed, calling off two helicopters that were en route (a Royal Canadian Air Force helicopter had also been dispatched from Comox to assist, with dusk approaching, Sills said).

Sills was unsure of the extent of the man’s injuries, if any.

With the warming weather this week, Sills warned of the changing backcountry conditions.

“The creek beds are opening up and are soft, and that goes for both creek beds and crevasses,” he said. “Snow bridges, generally, are starting to fail and are not dependable.”

Snowmobiling fell from the No. 1 outdoor activity requiring a WSAR response in 2017-18, to No. 5 in the volunteer group’s most recent manager’s report, a period in which there were seven callouts. Hiking replaced snowmobiling as the top activity requiring response last year, at 16 callouts, ahead of out-of-bounds skiing (11), mountain biking (nine), and ski touring (eight).

A 56-year-old man is facing charges of assault related to a domestic incident this week, police said.

Just after 11 p.m. on Sunday, March 17, Whistler RCMP respoinded to a report of a domestic assault in Cheakamus Crossing.

The man was arrested and subsequently released with a promise to appear at a future court date.

Mounties are investigating after “significant damage” was done to a vehicle at a local golf club this week.

Just before 4 p.m. on Monday, March 18, police received a report of mischief to a vehicle that had been parked overnight at the Whistler Golf Club. The black Honda Civic had damage to its hood, bumper and front fenders, police said.