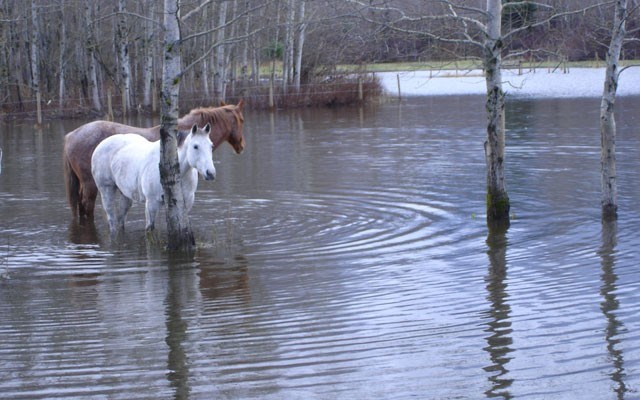 Two significant Sea to Sky flood hazards are going to be addressed soon due to a cooperative funding agreement between three levels of government. Officials in Squamish and Pemberton are working with the federal and provincial governments to create a $2.4 million fund to improve the Ayers and Squamish River dikes.

The Pemberton project calls for an upgrade of 1.4km along the eastern side of the Lillooet River from the Highway 99 bridge over the river northwards. The work will include raising the height of the dike and resurfacing it so the levy meets a 200-year flood event standard. The budget for the project is just under $612,000.

The Squamish project will involve increasing the height of the dike and widening it in places where it hasn't already been raised. Some additional erosion control measures are planned for the dike. The budget for the work in Squamish is set at more than $1.8 million.

The timing isn't set yet for the projects. Christina Moore, the communications manager with the District of Squamish, said two key project issues are yet to be sorted out.

"The timing of the work will depend on input from federal and provincial environment ministries, as to the optimal time frame, and it will also be worked in conjunction with the Squamish Nation for access," she said.

A request for proposals by the Pemberton Valley Dyking District issued in August of last year indicates the work is expected to start sometime before Nov. 1.

Each level of government is going to provide one third of the funding required for the two projects.

The two MPs who represent the two areas released a joint announcement with the local governments and MLA Jordan Sturdy.

"With this investment, we are improving safety while creating jobs and securing economic prosperity," said Chilliwack-Fraser Canyon MP Mark Strahl through a news release.

West Vancouver-Sunshine Coast-Sea to Sky Country MP John Weston said the health and safety of people who live along the Squamish River has been a concern of his dating right back to when he was first elected.

"The flood protection measures to be funded by this investment are several big steps forward," he said.

West Vancouver-Sea to Sky MLA Jordan Sturdy said he is pleased the different levels of government could work together to pull the funding together.

"These two dikes are vital to the flood protection infrastructure in Squamish and Pemberton. They safeguard key transport routes in and out of the valley, and protect residential, industrial and commercial properties," she said.

Pemberton's acting mayor, Alan Leblanc, said the potential of flooding is a concern every year.

"By initiating mitigation strategies, such as the Ayers Dike upgrade, we will considerably reduce the impacts of this hazard and benefit the community," said Leblanc.