Squamish Search and Rescue members were only volunteers at Indiana event
Oct 14, 2015 6:00 PM By: Brandon Barrett 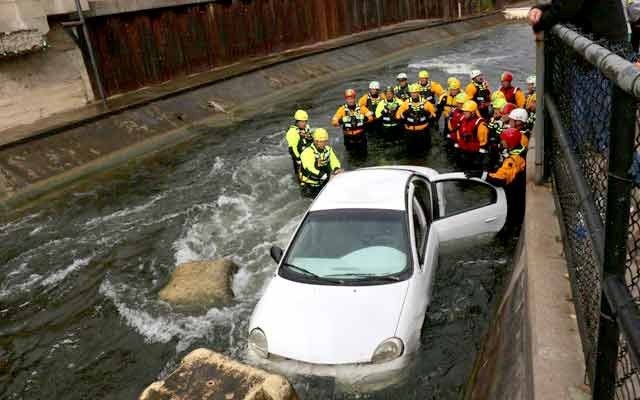 Squamish Search and Rescue members made a splash in Indiana this month at the Surface Water Rescue Conference, an international gathering of rescue personnel and equipment manufacturers.

Hosted by the International Association of Water Rescue Professionals (IAWRP), the four-day conference is an opportunity to share best practices and attend expert lectures on swift water rescues. Over 100 representatives from 63 rescue agencies located in Canada, the U.S., Australia and Norway were in attendance.

"It's always a really positive event in terms of connecting with people of similar mind and expertise," said John Howe, director of Squamish Search and Rescue. "No matter where you go in the world the principles are the same, and (rescuers') desire to better themselves and learn from others is important for everyone."

Interestingly, the three Squamish Search and Rescue members who made the trip down to South Bend — Jim Douglas, Mike Teske and Josh Danielson — were the only volunteers in attendance, and they made quite the impression on their industry peers, which included members of the U.S. military, FBI and Homeland Security.

"It was expressed to us on a number of occasions... that (the search and rescue teams in attendance) were incredibly impressed with our abilities and our skillset," said Douglas. "Down there in the States they don't have too many volunteer organizations, and I think their exposure to those groups is that they are not of the same quality as some of these guys that are paid to train and practice and respond."

After a day of expert panels and lectures, it was time to get in the water, where conference attendees practised different rescue tactics in the St. Joseph River, North America's first artificial whitewater waterway.

Attendees also heard from Craig Gerrard of Raven Rescue in Smithers, who led a presentation on rescues from vehicles submerged in water, a leading cause of death during flood events.

"Right now, statistically, 62 per cent of the people who die in swift water (in the U.S.) die from vehicles they've driven into flood water," noted Douglas, who also teaches with Raven Rescue. "So our whole team had a lot to offer as far as insight and practical experience doing vehicle-in-water rescues."

Like most fields, technological evolution is changing the way search and rescue crews work, and IAWRP president Dave Abt pointed to several key innovations in swift water rescuing.

"Right now the community is just starting to figure out what to do with drones and unmanned aircraft, like the little quad copters and things like that," he said. "There are also some new thermal systems being developed by manufacturers to protect the operator, or the rescuer, during inclement weather."

Abt also discussed the increasingly important role helicopters are playing in swift water operations, as evidenced by the deployment of Black Hawk choppers from across the southeastern U.S. following the devastating flooding that hit South Carolina this month.

"The use of helicopters in mainstream rescue, not just extreme situations, has been building momentum for a couple years now," he said. "(In the past) there would have to be a major natural disaster for (helicopters to be deployed.) Now they're being used as another tool in the toolbox."

The IAWRP conference is also an opportunity for rescue personnel from across the globe to connect and build on the camaraderie that all emergency service workers share, according to Douglas.

"Basically (all rescue personnel) in the world train to the same standard, so we all speak the same language and we all know the same techniques," he said. "It's a brotherhood; we all work together, we all do the same job."