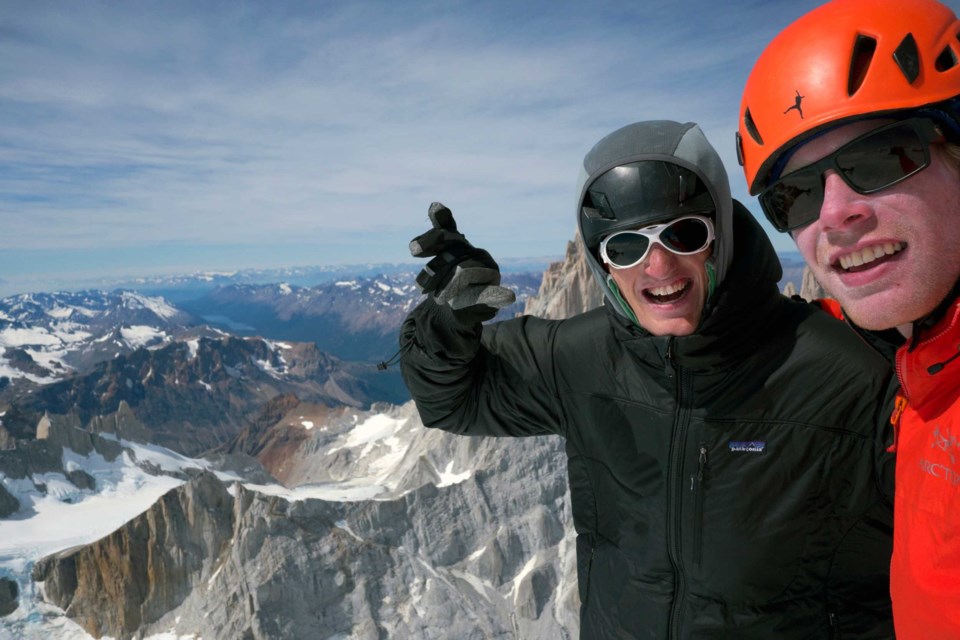 When Jason Kruk and his climbing partner Hayden Kennedy stood at the summit of one of the most challenging mountains in the world last month, the pair just knew they had an assignment on the way down.

What they didn't know was that the assignment — taking 125 bolts out of Cerro Torre — would get more attention than their accomplishment in taming one of the steepest and most difficult climbs in the world through so-called "fair-means."

Kruk, a Squamish resident, climbed Cerro Torre with Kennedy in the Patagonia region of South America on Jan. 16.

The pair took 13 hours to get to the top of the granite tower on the border between Argentina and Chile using one rope and basic climbing equipment. According to posts on the climbing discussion website called Supertopo.com, the Canadian and the American from Colorado climbed very quickly.

The summit is 3,100 metres (10,260 feet) above sea level and the top of the spire features a steep wall that Kruk said towers four to five times higher than the Grand Wall of the Stawamus Chief.

At the age of 24, Kruk describes himself as a professional climber. He and others that climb the most challenging mountains around the world have strong feelings about the use of climbing aids like ladders, chains and bolts. The path Kruk and Kennedy took up Cerro Torre is known as the Compressor Route and back in 1970 an Italian mountaineer named Cesare Maestri used a compressor to install 400 bolts up the rock face.

"The use of that compressor went so far beyond what was acceptable and deemed reasonable at the time that it was just outrageous," says Kruk in an interview after his return.

According to Kruk, Maestri disrespected the mountain by installing the bolts.

"It is the most awe inspiring piece of rock architecture to ever exist," he says. "It takes your breath away. There's no easy way to the top."

Many climbing purists believe the bolts never should have been installed and removing the bolts was a justifiable action, Kruk says.

Some residents in the nearby town of El Chaltén were very angry when they heard the bolts were removed.

Kruk says a lot of non-climbers were furious when they heard the bolts were chopped and the Compressor Route was no more.

"It was pretty confusing for us why people were so upset with what we did," says Kruk. "Cerre Torre is a mountain of the world. In my opinion it is owned by a global community of climbers."

A town doctor, the breadmaker and others, says Kruk, were angry enough to speak up. He adds that the upset residents were venting their anger with no interest in debating or discussing the issue.

"The doctor certainly doesn't ask for any of my input in making decisions about her hospital, yet she wants to regulate how I climb," he says.

While Kruk and Kennedy, 21, stirred up strong nationalistic feelings in El Chaltén there were some residents who sided with the foreigners.

The bolts are gone and now the only way up the southeast side of Cerro Torre is through fair-means climbing techniques and Kruk is moving on from the controversy. He says he next plans to go to Pakistan for a climbing adventure.

He doesn't plan to chop any climbing routes in Pakistan, or anywhere else.

"I'm not an alpine vigilante," he says of his actions last month on Cerro Torre. Those who like to climb bolted routes in the Sea to Sky Corridor have no worries of Kruk removing hardware here.

He says comparing Cerro Torre to the local climbing opportunities is like comparing apples to oranges and while he doesn't agree with the hardware installed here he has no plans to remove any more bolts, chains, ladders or other man-made permanent climbing aids.

Kruk has climbed in Squamish for many years, but he calls the climbing areas in the Sea to Sky corridor "roadside crags" when compared to Cerro Torre. As a boy, he travelled to Squamish from his home in North Vancouver to explore the climbing routes. From those early days he says he became hooked and looked for more difficult climbing challenges.

By reading climbing magazines and books he learned details of the most difficult challenges around the world, inspiring him to become a professional climber.