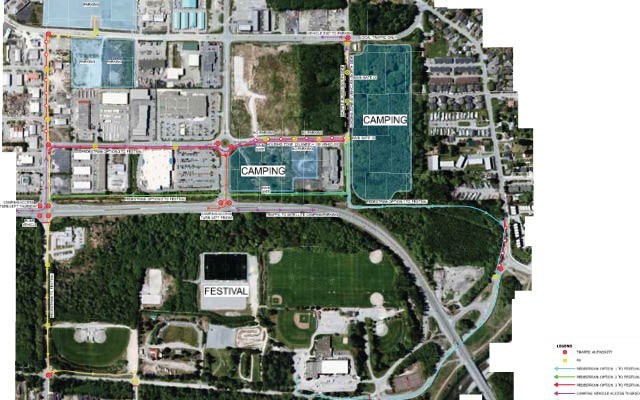 The temporary use permit was granted at Tuesday's council meeting despite concerns from residents who live near one proposed campsite.

One site will allow up to 14,000 campers over five days on a large plot of land just off Highway 99 bordered by Queens Way, Pioneer Way, Aspen Road and a tree buffer at the back of homes along Government Road. The second, less controversial plot, is next to the Sandman Hotel beside Highway 99. The southern site could hold just over 6,000 people. The permit covers a 16-day window to allow set up and take down at both locations.

The temporary permit allows SVMF to set up the campsites each August through to 2016.

Lorne Robson, a senior citizen whose home at the Riverstones apartment complex overlooks the northern piece of property, told council he feared festival campers will trespass and damage property at Riverstones.

"That area should not be used as the area for the campgrounds," said Robson.

Dennis Smith, the Riverstones property manager with Sea to Sky Community Services, said he supports the music festival. He said Riverstones is a safe, quiet and affordable housing complex that won't be safe and quiet during the festival if camping is allowed metres away.

"Perhaps scale it back from a three-year permit to maybe just one year so we can see how successful it has been," said Smith. "If it's been successful having that camping there, you simply build on the success the next years whereas if you approve the three-year permit and it's not successful, then we're kind of stuck with a problem for two more years."

Others spoke to council expressing their opposition to the camping proposal but a few, like Carole Bird of Two Birds Eatery, spoke in support of the festival organizers. Bird has provided catering services to the festival for the last two years and this year she expects to employ 35 people during the festival period.

"Revenue from the festival keeps us going through these lovely slow months," said Bird.

Squamish mayor Rob Kirkham asked Paul Runnals, the festival's executive director, to address concerns expressed by residents about the camping plan. Runnals said his company is willing to negotiate the specific details of the plan.

"There's a lot of things we can do and work with concerned residents to look at ways to bring some sort of comfort into that sort of planning," said Runnals.

He noted the backup plan if, the temporary use permit wasn't granted, would have been to use up to 400 buses to drive ticket purchasers between Squamish and Vancouver each day of the festival.

The temporary use permit requested by SVMF was granted following three hours of discussion and debate in the Squamish council chambers. The seven council members approved the application with a demand that SVMF leave a 50-metre tree buffer between the northern camping site and the residential developments on the northern edge of the camp area. The original proposal called for as little as 20 metres of tree buffer.

The festival is set for Aug. 8, 9 and 10. The main stage will be on the grass Centennial Fields while the second stage is to be constructed in the location of last year's main stage at Hendrickson Fields. The third stage is planned for a vacant grass field on Loggers Lane and the fourth stage will be set up at for the Al McIntosh Loggers Sports Grounds.

The music acts planned for the festival haven't been announced. Performers at past festivals included Matthew Good, Devo, Weezer, Metric, The Tragically Hip, Macklemore and Ryan Lewis, Vampire Weekend and Queens of the Stone Age.