Local Sunniva Sorby soon to be one of two women to overwinter in the far north
Mar 24, 2020 4:00 AM By: Keili Bartlett / Squamish Chief 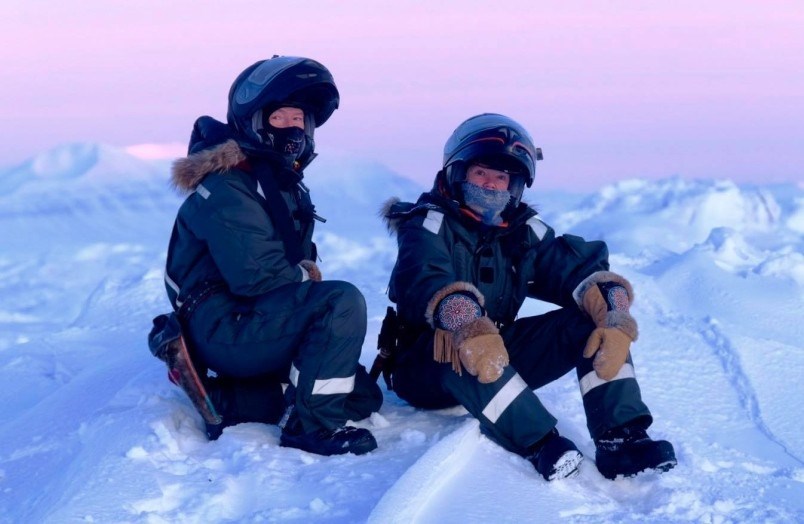 Photos courtesy of Hearts in the Ice.

While on a satellite phone call from the Arctic, Squamish's Sunniva Sorby sounds far away.

"I almost postponed our call today, because we had a mother polar bear and her two cubs just down a little way from Bamsebu here," she told The Chief in early March.

She and fellow citizen scientist Hilde FŒlun Str¿m have been sharing a 20-square-metre cabin since August with their canine companion. They have weeks left to go without electricity or running water, gathering research data-and becoming the first women to overwinter-before they return south in May. It will be the longest period anyone has collected data in the area.

Later, they would realize the bear family was around 500 metres behind them. This hasn't been the only surprise the citizen scientists have faced. Just the day-to-day routine they perform to stay alive-and then gather research and data for seven scientific projects-keeps them busy.

"There's no distraction here. You get so caught in a vortex of time," Sorby said.

Every day, they build a fire in the wood burning stove (with wood they also must chop), and open the spike-guarded shutters that keep the bears out. One day, a storm was so bad they couldn't get out the front door, forcing them to crawl out a window instead.

"It's a lot of work every day just to take care of our living circumstances," she said. "We're completely committed."

The science projects they help with include wildlife observations, cloud and Aurora Borealis photos for NASA and snow and ice samples for the Norwegian Polar Institute.

In their time up north, Sorby said she's learned how critical citizen scientists can be and how resilient humans are. Not all contributions, she adds, require a life-changing move like theirs.

"There could be no greater time than now to focus on all of the different ways that we're polluting or taking from the rich resources that our natural world has provided," she said.

A film crew drops by to collect footage documenting the project, and the two women are also working on a book chronicling what day-to-day life is like. Although they're physically isolated-it would take someone six hours by snowmobile to reach them-they are connected to the outside world via satellite. One million people tuned in to a televised segment on the women's accommodations, and they've been featured in classrooms around the world through the Exploring by the Seat of Your Pants program. Sorby is especially proud of how they've helped students connect to the effects of climate change.

"We're very aware that this is a gift of time to be here in this place, having this experience," Sorby said. "This whole experience is a surprise. I don't know who I'm going to be coming out the other end."

However the expedition changes her, one thing is for sure: she's made her mark on history.

Before she hangs up the satellite phone, Sorby sends her regards "from Svalbard to Squamish!"