About 40 demonstrators held signs and waved at passing vehicles on Highway 99 on Sunday morning
Nov 10, 2019 5:00 AM By: Jennifer Thuncher/The Squamish Chief 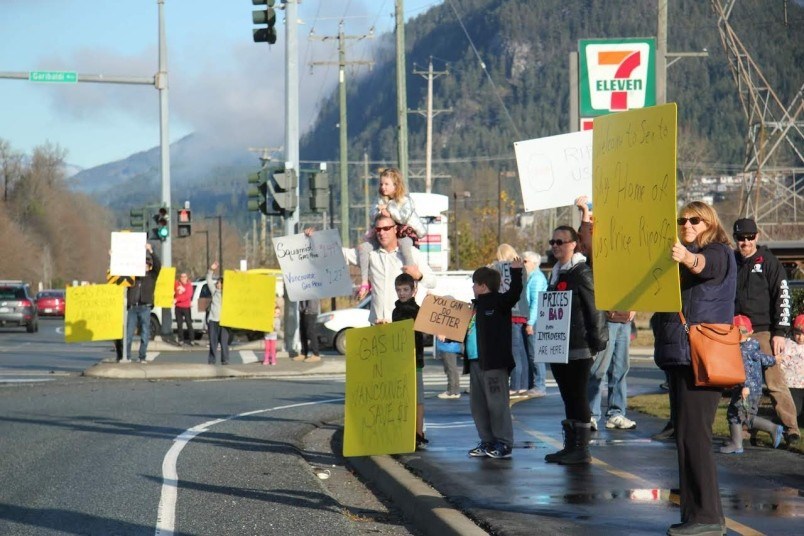 Squamish residents upset by the price of gas in town gathered near two stations in the Garibaldi Estates Sunday morning to make their voices heard.

About 40 residents held signs and chanted for TV cameras and passing motorists on Highway 99. The homemade signs blasted the higher price at the pump in Squamish or told drivers to gas up in Vancouver before heading up the Sea to Sky Highway.

The protesters argue that gas in Squamish is often more than Vancouver, though we don't pay the 18.5 cents per litre TransLink tax.

GasBuddy shows that on Sunday, fuel in Squamish and Whistler was 144.9 cents per litre, while in Vancouver it was 131.9 cents.

"We share in the frustration of our citizens as gas prices are consistently higher in Squamish than the Lower Mainland, even though Squamish doesn't contribute to a motor fuel tax," Mayor Karen Elliott said Sunday, Nov.10.

"One way to send a message is for citizens to exercise their purchasing power to the degree they can, and push back on companies who are charging prices higher than what is being paid in the metro area. This is obviously a challenge for locals though, unless they travel to Vancouver regularly."

Elliott added that municipalities, the regional district and First Nations in the Sea to Sky have proposed a small motor fuel tax as a means to fund regional transit in the short term.

"As we believe it can easily be absorbed by gas retailers, and it is an equitable way to share the costs between all those who utilize the highway-both tourists and locals."