‘It was crazy’: Squamish SAR manager 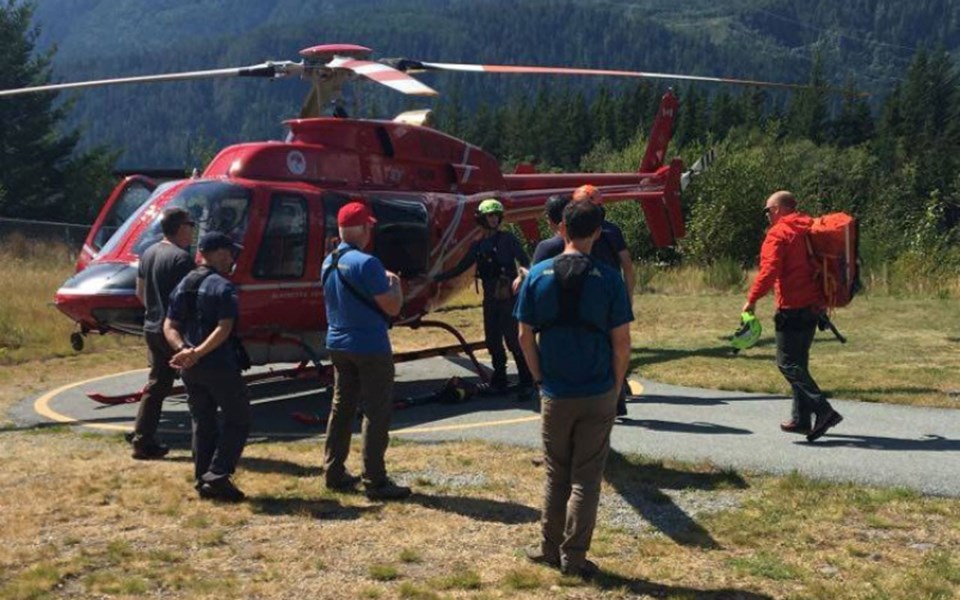 Squamish’s first responders have been working around the clock dealing with rescues this past week, with a whopping total of 13 calls occurring between Aug. 5 and Aug. 10.

The calls ranged from the tragic—a swimmer who died—to non-events, where the team was able to stand down before getting to the adventurer.

Six of those calls occurred on Sunday, with several occurring at virtually the same time.

Then, four calls happened on Monday.

Chute said it’s hard to say if this year overall is unusually busy. However, it seems as though the patterns have been different.

“What happened this year is during COVID, we didn’t do any responses for those first few months, and then once Phase 2 and 3 started opening up is when we started doing responses again,” Chute said.

“I think if we were to go back and track, say, last year, we would’ve done calls in March and April and May, where this year we didn’t do those calls.”

Chute said the organization has dealt with 73 calls this year, as of the morning of Aug. 11. Over 10 of them weren’t full responses, either because they were false alarms or the issues resolved themselves before crews were needed on the scene.

At the same time last year, the number of calls was 63 with the total for that year being 97.

The eventful week began with a midnight call on Aug. 5, after a concerned person spotted flares on the Stawamus Chief. Luckily, no response was necessary in this case.

On Aug. 7, a concerned mother reported two overdue campers in the Ashlu River area, but as crews entered the area, they found them driving out.

The day after, more serious calls started to roll in. On Aug. 8, a bike crash happened on In and Out Burger by Alice Lake. Search and Rescue, BC Ambulance and Squamish Fire Rescue rushed to the scene and crews used a helicopter to longline the injured rider to the airport. They then turned the patient over to the air ambulance.

Then came a flurry of activity on Aug. 9.

The first call came at 2:30 p.m. when a rider crashed on Pseudo-Tsuga. In this case, bystanders were able to walk the injured cyclist to a road where paramedics were able to reach them.

Rescue crews were able to stand down from this call—and luckily so, as their resources would be severely taxed almost immediately after.

A short time later that day, three calls came in almost at once.

A hiker fractured their ankle on the descent trail of Lake Lovely Water, mirroring a call that had happened the previous weekend. Rescue crews responded with a longline helicopter and lifted the injured person to the hospital where they were handed off to paramedics.

Around that time, a hiker twisted his knee and accidentally sprayed himself with bear spray. In this case, search and rescue talked the person through what to do over the phone, and he was able to rescue himself. Crews did not have to come to that person’s aid.

However, that didn’t mean rescue crews would have a moment to catch their breath, because another call was demanding their attention.

A serious bike crash on Hueso trail, by Alice Lake, required rescuers to rush to the scene. Crews airlifted the injured cyclist via a longline and brought them to the airport, where an ambulance was waiting.

Then another pair of calls came in at roughly the same time.

A group of seven around the Tricouni area was overdue from their trip, so rescuers went up in a helicopter and landed to check in on them. It turned out they were all fine.

Just as crews were cleaning up from the previous four calls, rescuers responded to a call of a camper who had been missing for 30 hours. However, he later was able to report he made it out alright.

Things did not slow down the next day, with four calls happening on Aug. 10.

At first, a personal locating beacon was activated, but that was found to be a false alarm.

Then, a climber fell into a bergschrund crevasse and was seriously hurt.

He was able to pull himself out, but rescuers had to airlift him off the northeast peak of Mount Garibaldi. He was then flown to Squamish airport and handed off to an air ambulance.

Afterward, a missing man in his mid-20s was reported in the waters of Browning Lake in Murrin Park. Search and rescue was called in but stood down.

RCMP located the person, who had been on an inflatable device and slipped off.

Paramedics and Squamish Fire Rescue rushed to help the man, and he was taken to hospital. However, he did not survive.

“Water safety has always been a concern in the Sea to Sky and the ocean, lakes and rivers in the Squamish area are no exception,” said RCMP Sgt. Sascha Banks in a news release. “Our thoughts are with the young man’s family and friends. I, unfortunately, have had to provide this adventuring safely message in the Sea to Sky far too many times, I can only ask that you please, please be safe in our communities.”

Afterward, rescue crews were called in to help a climber who fell off the Buttress of the Stawamus Chief.

The climber, who had an ankle fracture, was able to self-rescue and pull herself to the top. A rescue helicopter was then able to fly there and airlift her to hospital.

In addition to singing praises to the rescue volunteers, he also commended Squamish Fire Rescue for their work. Fire crews have been training with rescue teams and respond to many of the same calls.

Chute reiterated the need for recreationalists to be prepared for a long wait from responders and to do their homework before embarking on an adventure.