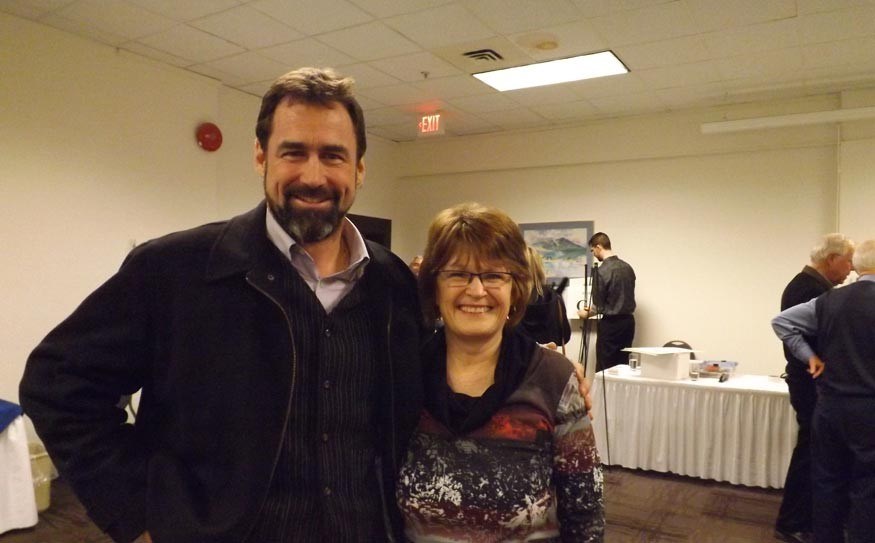 STURDY IS IN The mayor of Pemberton, Jordan Sturdy (with current MLA Joan McIntyre), has the blessing of BC Liberal Party members heading into the May 14 B.C. election. Photo by John French

BC Liberal Party members from West Vancouver to Darcy have chosen Pemberton Mayor Jordan Sturdy to represent the party in the next provincial election.

The voting started in West Vancouver Friday, Feb. 15 and wrapped up the next evening in Squamish. Party faithful were voting for either Sturdy or Robin Smith of the North Shore.

Outgoing MLA Joan McIntyre announced the final results after the counting was completed at the Sea to Sky Hotel.

"We did have a clear winner," McIntyre said as she prepared to announce the results of the constituency association vote. "It was Mayor Jordan Sturdy."

A long-time party member, Gord Addison, reported that 393 people voted for Sturdy and Smith collected 26 votes in a travelling ballot system that saw the vote organizers hold a three-hour poll in West Vancouver Friday evening followed by 90-minute polls the next day in Pemberton, then Whistler, and finally in Squamish.

Sturdy thanked all his supporters and said the campaign to win over party members was a long and winding road.

"The last four or five months has been a real learning experience for me," said Sturdy.

He said he's looking forward to similar success on May 14 when voters across the province participate in a general election.

After Sturdy spoke Smith congratulated the current mayor of Pemberton and joked that he too learned a great deal, but he did his learning in just five weeks. Smith entered the race on Jan. 21 while Sturdy announced his candidacy in October.

"I want to thank everybody that supported me and I know that we're going to do everything we can to help you win on May 14," Smith said to Sturdy.

The two parties that came closest to challenging McIntyre in the 2009 election haven't yet named their candidates. The Green Party and the New Democratic Party have both indicated they are working toward choosing their candidates.

In the 2009 election, Juliana Buitenhuis with the NDP received 4,214 votes while Green Party candidate Jim Stephenson got support from 4,082 people compared to McIntyre's 10,101 votes.