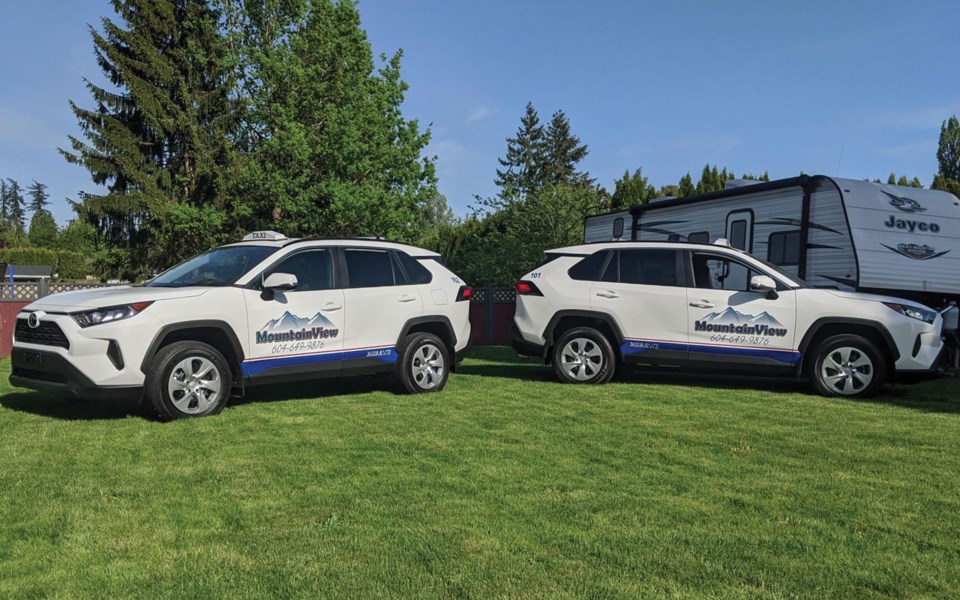 Mountain View Taxi has been operating in Pemberton for just over a month. Photo courtesy of Drew Arnold

After a three-year absence, Pemberton has a taxi service again.

“We’re nowhere near breaking even right now,” he said. “Unfortunately, it’s a small location and it’s hard for the guys to make a living.

“There’s so little work up there right now that it’s hard for the guys to make any money.”

The service, which had a soft launch in late June, runs from 7 a.m. to 8 p.m. during the week, with later hours on weekends.

“Fridays and Saturdays aren’t bad. They’ll be busier once things open up a bit more,” Woodley said. “During the week, it’s pretty quiet, and once the legion closes at 8 o’clock, that’s pretty much it ‘til the next day.”

Woodley notes that one driver is on call at the RCMP’s request during off hours.

“We’d love to be able to do more for the people. Unfortunately, we turn down some jobs because guys are off and there’s no money in it for them to be out,” Woodley said.

Woodley originally explored the Pemberton market looking to offer towing services after Pemberton RCMP were looking for a new company. After discussions with the force, Woodley discovered there was no taxi service, which the police said was greatly needed.

“I asked them, ‘So what are you looking for to help with the problems you’ve had in the past?’” he recalled. “They said, ‘Well, we could really use a taxi up here.’”

Pemberton RCMP wrote one of three support letters that Woodley presented to the Passenger Transportation Board, which gave him approval to operate in Pemberton, Lillooet and Squamish last summer.

He subsequently purchased two 2020 Toyota Rav4s that are currently running, with a third ready to go when work picks up.

“I went and bought some cabs, got ‘em all done up brand-spankin’ new 2020 Rav4s and they’re up there now hoping that it survives,” Woodley said.

Admittedly, it has been difficult to start offering service during the COVID-19 pandemic, Woodley said.

“There’s not as many people going out to events that they would normally go to, especially the drinking events where they might take a ride to and from home,” he said. “It’s a growing pain that I’m hoping will heal soon.”

In terms of precautions, Woodley has instructed drivers to spray the cabs with disinfectant before picking up the next fare, but has otherwise left it up to their discretion. Drivers can ask passengers to sit in the back seat and have masks that they can wear, he said.

Woodley noted that the taxi and towing services work in tandem, as the cabs can provide jumpstarts and unlocks, or, of course, pick up passengers whose car has broken down.

Mountain View will have another car on the road in the future, likely in Squamish, as Woodley needs to have half of his six licenses active by October.

“Whether there’s the work or not, I have to license that third car,” he said.

Mountain View is allowed to run trips that start or end in the areas he’s approved for, so can drive someone from Pemberton to Whistler, but can’t do a trip both originating and ending in Whistler, for example.

Another transportation option could be coming to town, as the Whistle! app, currently operating in Tofino and Whistler, lists Pemberton as an area of future expansion. The app currently operates in the area between Function Junction and the Blackcomb Helicopter base.

Catching up with Second Chance Cheekye Ranch
Sep 20, 2020 10:21 PM
Comments
We welcome your feedback and encourage you to share your thoughts. We ask that you be respectful of others and their points of view, refrain from personal attacks and stay on topic. To learn about our commenting policies and how we moderate, please read our Community Guidelines.