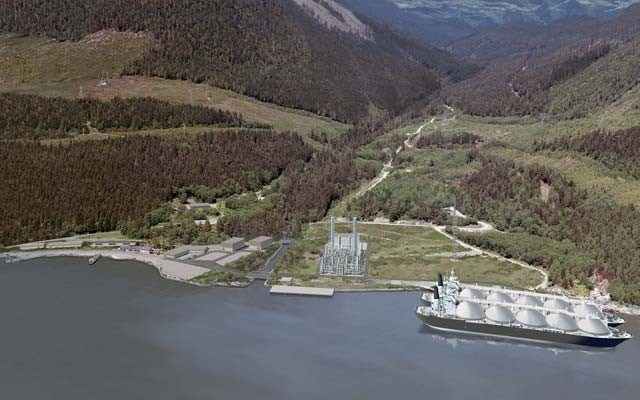 About 3,000 litres of water and leachate were reportedly spilled at the Woodfibre LNG site southwest of Squamish on Thursday, Sept. 8.

In a news release, the company said the spill happened during routine maintenance on the site's industrial landfill, which contains wood waste from a former pulp mill. According to Woodfibre, a pipe connected to the landfill was being flushed with water when it broke, spilling the wash water and leachate.

Leachate is any liquid that drains from a landfill containing dissolved or suspended material considered harmful to the environment.

A sample from the spill has been collected by a third party for further analysis. The spill was also reported to the BC Ministry of Environment and Emergency Management BC for investigation.

The company said the spill was "primarily contained" in a containment sump and "quickly cleaned-up" using a commercial vacuum truck.

"Fortunately, the majority of what was spilled was water," wrote Woodfibre's senior corporate communications manager Jennifer Siddon in the release, "but the spill does underscore the challenges of managing a 100-year-old industrial site."

Woodfibre LNG has proposed to build a liquefied natural gas processing and export facility on the site of the former British Columbia Sulphite Fibre Company pulp plant, which began operations in 1912. Siddon said the company plans to eventually close down the landfill. A subsidiary of Pacific Oil & Gas Limited, Woodfibre LNG officially took ownership of the site in February 2015.

In a follow-up interview, Siddon said "most" of the spill was trapped in the sump, and what didn't washed onto the ground, away from nearby creeks or the waters of Howe Sound.

"It's not that the 3,000 litres ended up on the ground; a lot of it was either contained or removed immediately," she added.

For Tracey Saxby, co-founder of volunteer environmental group, My Sea to Sky, the spill reiterated that Woodfibre is not equipped to manage the proposed LNG plant.

"If they can't deal with the existing challenges at the Woodfibre site, how are they going to deal with an LNG export facility, especially when they've proposed to use two 40-year-old tankers for their floating storage facility?" she posited. "This spill shouldn't have happened."

Woodfibre plans to use two 285-metre tankers that are nearly four decades old, among the oldest five per cent of LNG carriers in the world. But Siddon assured that the ships "are being kept to a high level of standard" and "the equipment on them will all be new."