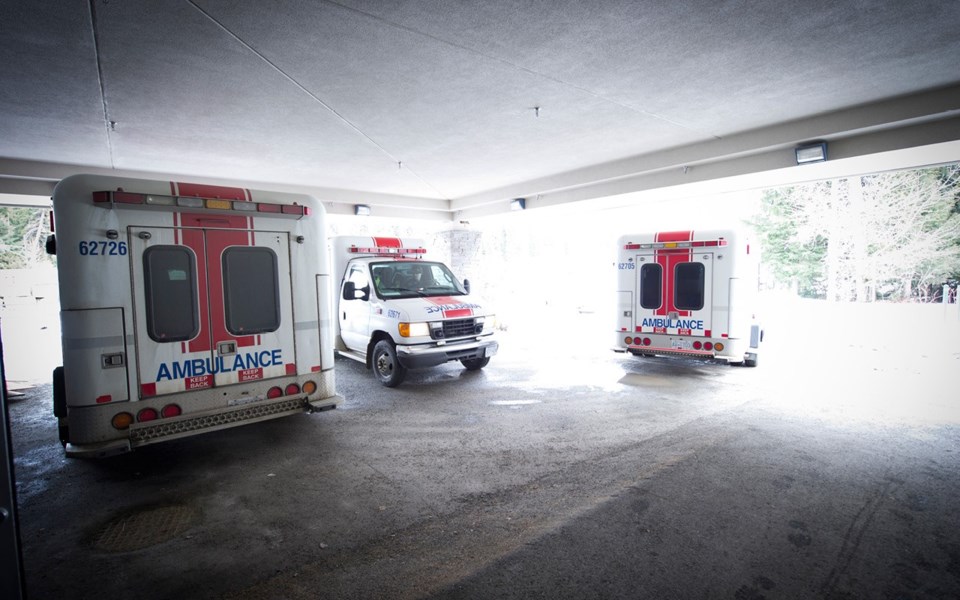 ambulance activation Getting patients to trauma centres in a timely manner is key to saving lives. photo by Bonny Makarewicz/File photo

Vancouver trauma surgeon Dr. Ross Brown has worked in what he believes is the best trauma system in the world.

It was while he was stationed in Afghanistan on two different tours—one in Kabul, the other in Kandahar.

"I didn't have the best facilities—our initial facility was a canvas tent ... but I was totally surrounded by an unbelievable evacuation system that would bring the victims to us in a very short time ... We would do our work and very quickly ... they (the patients) were on a plane going home or they were seen at a higher level of care," says Brown at a luncheon hosted by the Rotary Club of Squamish on Thursday, May 23.

This military system, he adds, is the lens through which he looks at the delivery of trauma services in the Sea to Sky corridor as Co-Senior Medical Director for the Coastal Community of Care, Vancouver Coastal Health.

"That's an unbelievable system," he said of the military trauma system.

"If we could do it with multiple militaries and multiple facilities working in Afghanistan, we can probably do better in British Columbia."

Brown offered Rotarians a snapshot of the state of trauma services in the region, highlighting the many factors at play in the Sea to Sky corridor: the growth of tourism, the single highway in and out of the region, the weather which can hinder air transport, among many other things.

"This is a very living system," he said of the dynamic and ever-changing service.

He highlighted two recent cases over the winter in which the patients survived despite the odds stacked against them—a snowboarder with a ruptured aorta on the top of Whistler Mountain, the other with a significant stab wound in the village. (See Pique, May 16, "Whistler pushes for trauma room expansion" for more on these stories.)

"There's some fantastic advanced state of the art stuff that's occurring," he said of the trauma care in Sea to Sky.

But there are challenges.

Like working in a war zone, the corridor is far from major trauma centres. It too relies on an intricate network of inter-connected yet separate agencies working closely together: communications, first responders, initial care facilities and the urban trauma centres.

The transportation system, he added, is critical to the delivery of trauma care in this region.

"The transportation system is fundamental when you've got a (health care) system like this," said Brown.

In the Sea to Sky corridor, trauma is a busy business.

According to the most recent statistics from the British Columbia Emergency Health Services (BCEHS) there were 3,535 calls in 2018 to BCEHS for medical emergencies in the corridor: Whistler with 1,902, Squamish with 1,392 and Pemberton with 241. It's a call volume that has remained fairly steady over the last three years, albeit with a slight decrease in calls in 2018.

More tellingly, however, is the nature of the calls. In Whistler in 2018, 13 per cent of calls were immediately life-threatening or time-critical with 12 calls a code "purple" requiring the highest level of response. A further 21 per cent of all calls were potentially serious, or urgent.

That's fully one-third of all calls urgent or higher.

"Whistler has a large number of BCEHS transfer calls: Patients requiring transfer from the local medical facility to a hospital with a higher level of care," said Shannon Miller in an email, communications officer with BCEHS.

Whistler and Squamish are both designated "urban" stations. The BCEHS target is to arrive within nine minutes, 70 per cent of the time for those life-threatening "lights and sirens" calls.

The median response time in Whistler last year was 9:46, in Squamish 10:16 and in Pemberton 15:34. Not all responses are made within those averages.

Another factor complicating health-care services in the corridor is that often doctors or nurses from the Whistler Health Care Centre are needed en route, supporting paramedics and caring for the patient as the ambulance races down the highway. There are no advanced care paramedics stationed in the corridor (paramedics specialized in advanced life support including advanced cardiac care).

"They're too busy to get in the back of an ambulance," said Brown of the doctors and nurses who have to leave the corridor for hours at a time.

Brown also highlighted some of the infrastructure challenges in the corridor pointing to the aging Squamish Hospital and the 25-year-old Whistler Health Care Centre.

"We have infrastructure challenges," he admitted.

Those challenges must be considered within the bigger picture. Vancouver General Hospital, B.C.'s largest teaching hospital and a Level 1 Trauma Centre, which sees many of Whistler's trauma patients for example, is in the midst of a $102 million renovation to make way for more operating rooms.

When asked about the request from local health providers for a bigger trauma room in Whistler (currently the WHCC has one small trauma room with a second nearby room which can be used for overflow), Brown said: "I think the users who are there have very valid concerns around the size and makeup of the facility, not just the trauma room. Our staff have gone to listen to their stories to review what's possible. So we're at that stage where we're gathering the data to look at it."

Among the ideas on the table is the possibility of taking down a wall to make the trauma room bigger and more efficient.

"Those are legitimate questions to ask: Can we do it better?"

It's the same question posed about the system overall. There is a continued push for injury prevention; there is registry to collect and analyze the data in an effort to understand changing patterns.

"Are we perfect? Have we got it yet?" said Brown.

"No, but we're getting there."