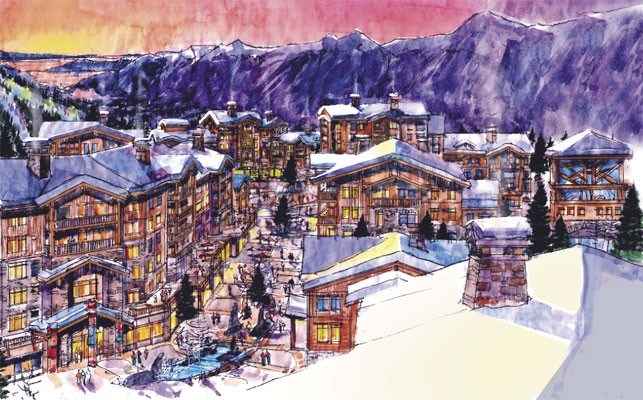 GOT GAS? A conceptual image of the four-season Garibaldi at Squamish resort proposed for Brohm Ridge, north of Squamish.

Duelling consultants reports are forming a key part of the information put to the provincial Environmental Assessment Office (EAO), as it decides if the proposed Garibaldi at Squamish (GAS) four-season resort should move forward.

GAS proponents stand by their skier-projection numbers as well as their non-skier numbers, which were recently thrown into question by a study from MNP consultants in a report commissioned by the province.

"We were surprised at the MNP findings," said Jim Chu, vice president, special projects and partnerships of the Aquilini Investment Group. "Our first reaction was: 'Do these consultants have expertise in the global ski and resort market?'"

GAS's numbers come from a consultant report and initial analysis by SE Group.

"They're (SE Group) seeing the picture through the whole world, not just through the local Vancouver lens," said Chu.

"We're talking about a global market to attract people that we can also build upon."

SE Group maintains that GAS would attract between 700,000 and one million non-skier winter visits and approximately 730,000 skier visits by build out in 20 years time. The MNP report, on the other hand, cuts the skier visits in half, citing the flat market, among other things, and calls into question the numbers of Nordic visitors and skaters as well as calling the annual summer visit numbers "overly optimistic."

GAS proponents reiterate the importance of the "cluster effect" in growing the business, not taking it from existing resorts.

"That's where we think we can make the tourism in British Columbia, and especially in the Sea to Sky corridor, much larger than it is now," said Chu. "It's not about being a smaller piece of the pie but making the pie grow larger."

Among other things, SE Group points to the potential in the Chinese market and the local visible minority market.

The GAS four-season resort development is projected by its proponents to bring half a billion dollars in additional annual economic output during the first 20 years, throughout construction and resort operations. If approved, it would see the development of 22,000 bed units on Brohm Ridge — thousands of housing units and hotel/tourism accommodation units.

In his follow-up to the government, SE Group president Ted Beeler also addressed the concerns raised about building a new ski resort in a warming climate.

Beeler wrote: "We believe GAS will be in the unique position to confront weather and climate uncertainty like no other North America resort has to date, because it will be able to consider these impacts from its inception... GAS will be different in that its multi-season recreation offerings are seamlessly integrated into their overall plan for skiing, real estate and village development, providing a comprehensive and more cohesive all season experience than what is offered elsewhere."

The provincial EAO office is in the process of deciding if GAS should receive an environmental certificate, which, if successful, would move the project along in the approvals process.

Mayor Nancy Wilhelm-Morden, staff and council delivered the message that the GAS proposal will put Whistler's significant revenue streams at risk and will deter planned investment and reinvestment in the resort.

Chu added: "Our interest is to work with Whistler and the other resort operators so that we can market this together."

The province expects to make a decision on the environmental certificate this fall.