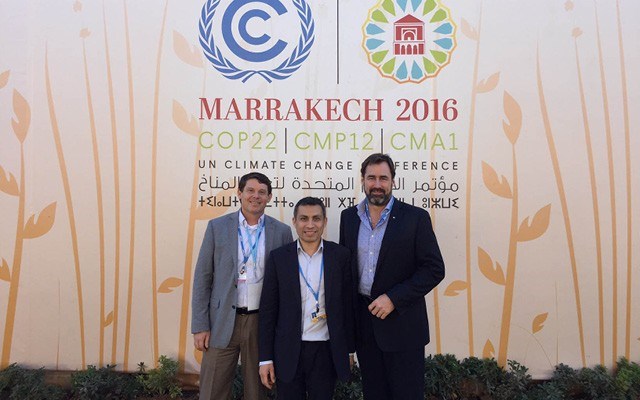 The B.C. government was honoured at an international conference last week as a leader in climate change for its revenue-neutral carbon tax.

The United Nations presented British Columbia with one of 13 Momentum for Change awards on Wednesday, Nov. 16 at a Low-Emissions Solutions Conference in Morocco.

"The United Nations has... identified our revenue-neutral carbon tax as a model that jurisdictions around the world may want to consider. It's something that clearly works. It's simple, it's transparent and it's effective in reducing emissions, while at the same time allowing the economy to grow," said B.C. parliamentary secretary for Energy Literacy and the Environment Jordan Sturdy, who is also the provincial MLA for the Sea to Sky.

British Columbia was the first jurisdiction in North American to implement a carbon tax, in 2008. The tax covers most types of fuel use and carbon emissions, roughly 70 per cent of the province's total emissions.

Independent studies have found that the tax led to a 16-per-cent drop in fuel use per capita between 2008 and 2012 in B.C., while fuel use rose across the rest of Canada. But its impact on emissions levels, which are influenced by a wide variety of factors, is less clear. During the years the tax was in place for the entire year, from 2009 to 2014, greenhouse gas emissions from taxed sources rose by 4.3 per cent, while emissions from non-taxed sources fell by 2.1 per cent, according to analysis by Food & Water Watch. British Columbia's total greenhouse gas emissions are projected to increase over the coming years, even with the tax in place.

Although widely lauded for its carbon tax, not all are satisfied with Victoria's recent approach to climate change.

"We're looking for a climate plan that gets B.C. back on track for emission reductions, but also one that helps to position B.C. to be competitive in an increasingly decarbonizing global economy. The climate plan that we saw in August really does neither of those things," said Josha MacNab, B.C. director of think tank the Pembina Institute.

Critics of this summer's Climate Action Leadership Plan questioned why it didn't include an increase to the carbon tax as was recommended in a report last fall that was commissioned by the Liberal government. But Premier Christy Clark said the tax hike wasn't feasible, underlining the need to balance environmental priorities with economic ones. The tax has remained frozen at $30/tonne since 2012. Clark has also committed not to do anything to the tax until Ottawa finalizes a national agreement on carbon pricing.

"Definitely continuing to pursue an LNG industry is going to make achieving our climate targets very difficult, if not impossible," she said. "The government certainly does have a conflicting objective in trying to do both of those things."

Others have also criticized Victoria for walking back on its earlier emissions targets. Last fall's climate report found that the province would fail to meet its earlier goal of cutting greenhouse gas emissions to 33 per cent below 2007 levels by 2020, and recommended B.C. focus on targets for 2030 and 2050. The province has adopted the long-term goal of dropping emissions by 80 per cent of 2007 levels by 2050, while avoiding a concrete target for 2030.