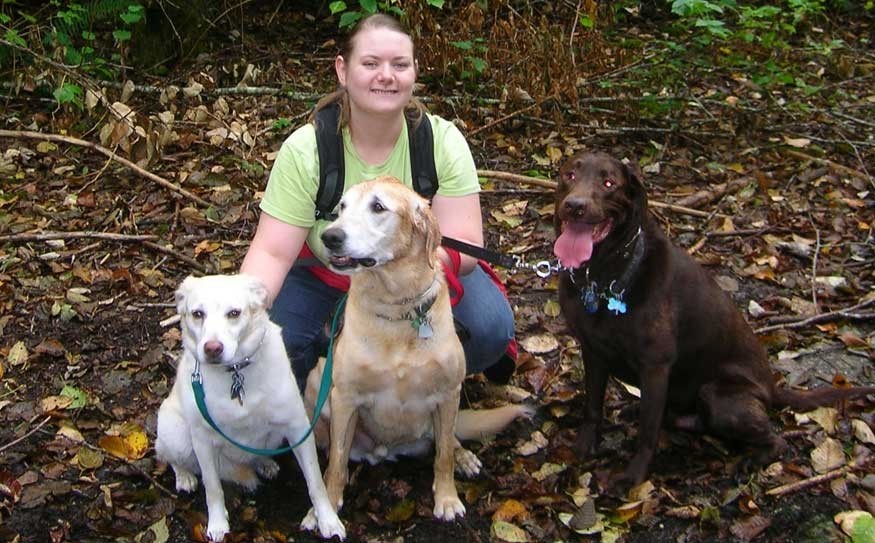 PET PARADE Aliesha Timms Wilson will be leaving her dogs Samwise, Zelgadis and Molly for two weeks this summer when she travels to Africa to care for animals in Botswana.

There's a dog problem in Botswana so a Squamish veterinary technician is heading overseas to help solve it.

Aliesha Timms Wilson from Squamish is expressing her love for animals by travelling to Africa with a team of other experts to offer their services.

The Animal Health Technologist has linked up with an organization called The Canadian Animal Assistance Team (CAAT) and in July she'll three weeks with the organization. Her animal welfare project will see the team provide emergency surgeries along with spay and neuter clinics for animals in Botswana. Her jobs will include preparing animals for surgery, giving them drugs and caring for them during recovery.

This will be the fourth time Timms Wilson has travelled on a CAAT mission. Previously she has made trips to Burns Lake, Ucluelet and Iglulik, Nunavut.

"It has always been my dream to travel to Africa and this way I get to visit while providing assistance to animals in need," said Timms Wilson through a news release announcing her intention to raise $3,000 to fund her travels.

She is travelling with two veterinarians and three other technicians. The area where Timms Wilson and her team are going has an issue with dogs running loose in packs.

"There are a lot of dogs that are, let's say, owned but wander loose," said the employee at the Garibaldi Veterinary Hospital in Squamish. "When they're not spayed or neutered there's more risk of them roaming in packs and when they start roaming in packs there's more of a danger to people because they tend to bite more."

She added that pack dogs are also more likely to carry illnesses like rabies or parasites.

Timms Wilson said she has collected $1,000 so far. Her fundraising plans so far include appealing for donations through the CAAT website, making direct appeals to businesses and through a pledge drive at her work.

While in Botswana she said she hopes to get some experience with farm animals, but she said her team deals with whatever they come across and most of the past trips made by CAAT have focused on dog health.

"In Burns Lake there was this one dog that had teeth that were rotting so badly they were literally falling out of the mouth so we did end up taking all of those out and then there was a dog that came in that had a porcupine swipe its face so we took all the needles out," said Timms Wilson of some of her previous experiences.

"This is an opportunity of a lifetime," she added.