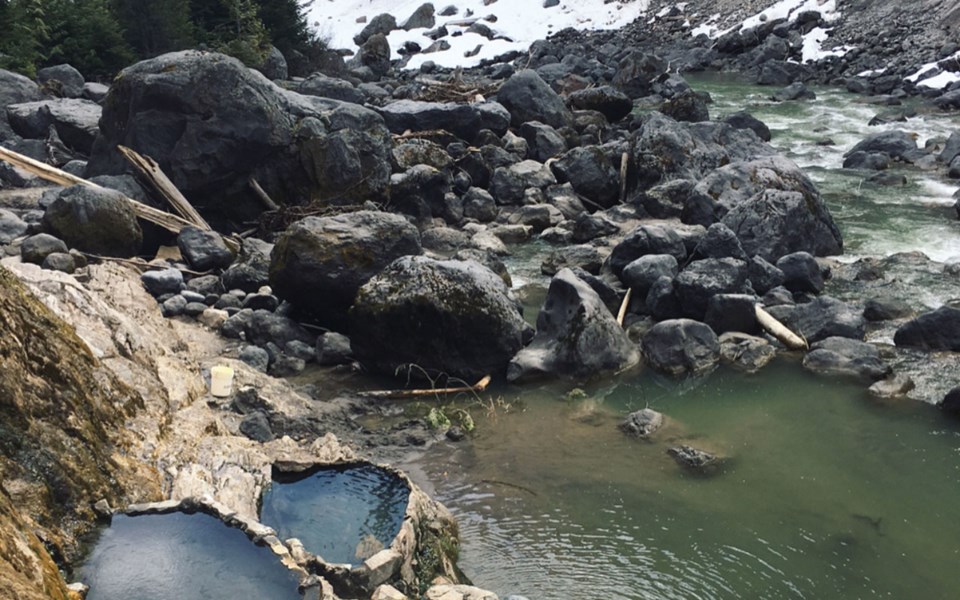 Pemberton and the surrounding area will have a multi-pronged approach when it comes to asking for provincial infrastructure funding.

At the Village of Pemberton’s (VOP) most recent council meeting, the discussion about Community Economic Recovery Infrastructure Program (CERIP) grants took a little longer than expected after a last-minute addition to the agenda.

Meanwhile, Tourism Pemberton submitted a letter dated Oct. 16 seeking VOP support for outhouses and pit toilets at various sites in and around Pemberton.

In presenting the letter, chief administrative officer Nikki Gilmore was supportive of the proposed projects that fall outside the VOP boundaries, but expressed concern over those within Village limits.

“It doesn’t meet the intention of the One Mile Lake Master Plan,” she said of the dog beach proposal. “As far as the new soccer fields, we’re going to be building the amenity building next year, so I think if these funds could go to other locations where they need those amenities, that would be our preference.”

The letter includes a plan for Tourism Pemberton to maintain the sites, but that was a non-starter for Gilmore for the two projects within the Village.

“When dealing specifically with Village infrastructure, I think it should be the Village’s responsibility as opposed to a volunteer organization,” she said. “I don’t think we would encourage permanent outhouses being placed in the Village. I think we could accommodate those connecting to our own infrastructure.”

Gilmore also noted there are existing facilities at One Mile Lake located between 400 and 650 metres from the proposed site.

With the grant covering all infrastructure costs, but not elements such as maintenance, Councillor Ted Craddock expressed concern over future funding.

“I don’t want to put the Village in a situation in one or two years from now that PVUS [Pemberton Valley Utilities and Services Committee] or the regional district and the town combined are faced with picking up the budget for these once they’ve been in place,” he said. “Once you have something, you hate to lose it.

Council ultimately voted to write a letter of support contingent on receiving support from other jurisdictions, on black water being processed at provincially monitored facilities, and confirmation of ongoing maintenance costs. Council passed a second resolution to request that two from within the boundaries are removed.

Tourism Pemberton president Mark Mendonca said the organization is looking to make the most of an opportunity benefitting Pemberton and beyond.

“We hope to raise our profile as a good community steward by providing washroom facilities at key locations over the next few years,” he said. “A funding opportunity has now presented itself and if we’re successful, it will allow us to make a significant contribution.”

Speaking on Oct. 27, Mendonca said that the organization planned to submit an application, with the One Mile Lake and recreation site projects removed, before the Oct. 29 deadline. He said while several municipalities, ministries and organizations had promised letters of support, he had only one in hand.

“It’s unfortunate that the grant was positioned with so little time to react and us getting all our ducks in a row,” he said. “We feel like we’ve done a good job. We’re feeling motivated.”

He said the list of proposed sites was originally around 14, but with some being nixed by others, including the two by the VOP, he anticipates making a request for eight.

Considering that they are currently closed, the Keyhole and Meager Creek hot springs requests, Mendonca said, might appear odd to some, but with ongoing discussion between the provincial government, Lil’wat Nation and other local stakeholders to officially restore access in some capacity, he feels it’s reasonable to be prepared.

“If the powers that be go ahead with the reopening, it would be nice to have some of these in place and, frankly, people are going there anyways,” he said. “How do you maintain it? How do you stop people from going up there, is the problem. It’s probably best to have some sort of facility in place.”

As for maintenance, Mendonca said Tourism Pemberton is prepared to provide at least five years of upkeep, with a two-year commitment for volunteer work already in place and plans coming together to raise the estimated $15,000 annual cost.

“We’re confident that that will work well. It’s our goal now to raise some funding to continue that,” he said.

Discussions surrounding an amended development permit for the Elevate at Sunstone development had a bit of sizzle during Village of Pemberton (VOP) council’s regular meeting on Oct. 20.

The impetus for the amendment requests was a course change for the project, which was originally going to construct six-plexes and four-plexes. However, after the applicant, Sunstone Ridge Development Ltd., faced challenges selling interior units, it applied for and was approved for a change in land use to allow duplexes earlier this year.

The project now would be one four-plex, which is under construction, and 23 duplexes for a total of 50 units.

Sunstone Ridge subsequently submitted two applications to amend its development permit. Firstly, it applied for a boundary extension application to create a 3.31-hectare property. The additional land would come from an adjacent property also owned by the company. Secondly, it applied for changes to its visitor parking and retaining wall requirements.

The application looks to change the dimensions of two retaining walls. One is a series of two-tiered boulder rock walls to handle a significant drop in grade. The lower tier is 2.5 metres tall while the upper tier is 0.6 metres. The other is a Sierra Earth mechanized wall on the southeast portion of the property, ranging from 3.3 to 7.26 metres in height and measuring 120 metres in length. The wall is intended to support plant life and create the appearance of a green wall.

Because both exceed the allowed height of 1.2 metres, they require a variance, building permit and approval from a geotechnical engineer.

Councillor Ted Craddock acknowledged he was concerned about the “cut and fill” approach, which was also used on Seven O’Clock Drive.

“There was no vegetation left and the increase in land height was in some cases from 12 to 20 feet (3.7 to 6.1 metres) additional height,” he said.

“When you do cut and fill, you’re not working to the topography, what you’re doing is doing a manmade topography,” he added later.

Craddock added that while he remains in support of the project, he also raised that there have been two stop-work orders issued after residents expressed concerns about the retaining walls, though only one such order was in place at the time of the meeting.

Coun. Amica Antonelli was also wary of the proposed process.

“I would say these are really substantial cut and fills, so in my opinion, it really doesn’t comply on the east side of the property,” she said.

Mayor Mike Richman, meanwhile, was worried about the visual impact of retaining walls, especially since council is being asked to specifically allow them.

“I was going to ask staff how we can feel confident the screening will be adequate,” he said. “Sometimes you see in mock-ups and plans nice trees covering up what needs to be screened and then when it happens, a few small shrubs are planted.

“I want to be really, really, really confident that the visual aspect is being guaranteed: that the green wall is green, that the retaining wall is properly screened so that you can’t see it.”

Chief administrative officer Nikki Gilmore said the applicant made the request before starting work on these particular elements. Complicating matters, she said, is that the project was “in stream” before the Village’s Hillside Development Guidelines were put in place. While the project, for the most part, aligns with those guidelines, there are going to be occasions where it’s not possible.

She said, however, that staff will ensure that requirements are put in place.

Council allowed applicant Cam McIvor’s request to speak to the concerns raised at this point of the meeting.

McIvor said the project regraded its road to avoid retaining walls between units.

“The previous approved development permit had a rock wall continuous behind the upper units of 300 metres long, three metres high, and we had a four-metre rock wall along the trail to the south the entire length of the project,” he said.

As well, he said the project will utilize the Sierra wall because of its soil and grass components, noting that the project can’t proceed without it.

McIvor expressed that he felt the proposed changes were not particularly significant in the greater context and hoped to receive approval soon, as the project is behind schedule and he has buyers looking to move in.

“This project was previously approved in a very similar format, just in six-plexes rather than duplexes,” he said. “We have financially and consistently improved this project to a point where we were very much in keeping with our original design that was once approved already, and we’ve improved upon it to reduce walls and remove some of those impacts.”

Manager of development services Lisa Pedrini confirmed that no residential properties will have a view of the retaining wall if the proposal goes forward.

McIvor looked to respond to subsequent concerns again, but was not allowed to on this occasion.

“This isn’t a venue for the applicant to rebut the comments of council,” Antonelli said. “I don’t think it’s appropriate. We’ve heard from them. We have their application.

“We’re supposed to be viewing council’s representations here, not the applicant’s.”

Richman agreed: “I think we’ve given fair opportunity to make comment. I don’t think it’s a back-and-forth situation and we’re relying on our staff at this point to help inform our conversation.”

Shortly after, the discussion started getting testy. In response to a question from Craddock, Gilmore reiterated that a development permit has been approved and the developer could proceed with its original proposal for six-plexes.

“It may sit empty or not developed if they can’t proceed with marketing and sales,” she said. “This could be a more viable project that they have people wanting to purchase.”

Craddock said he felt some push to decide on the proposal more quickly than he’d like.

“I’m feeling like I’m getting pressured by staff now because his original DP was put out for something completely different, that council has changed the plan from six-plexes and four-plexes to duplexes that we should rush ahead with this without giving proper consideration,” he said.

Responded Gilmore: “I don’t think that’s fair, Coun. Craddock. I was just giving information and I don’t appreciate that, actually.”

“I don’t appreciate being pushed, either,” Craddock said.

Gilmore reiterated that the information was purely for council’s knowledge, with Richman agreeing that it’s his view that it was presented in an impartial manner.

Council ultimately voted to refer the request back to staff to address several points including: visitor parking, pedestrian connectivity, diversity in the look of units, screening and visual impacts of retaining walls, and how development requirements are addressed.

The 2021 schedule of regular council meetings has been confirmed.

Manager of corporate and legislative services Sheena Fraser provided the rationale behind the two options presented. When scheduling, the department—as much as possible—takes care to avoid meetings after a long weekend Monday, while also avoiding holding meetings the same week as Squamish-Lillooet Regional District (SLRD) board meetings. The wrench of an early Union of BC Municipalities convention in September was another hurdle to overcome.

To deal with the latter, council opted for an option with an Aug. 31 meeting when there are generally no meetings held in August.

Craddock favoured the selected to allow for staff to fully enjoy a break Christmas and New Year.

“That would give us a little bit more time in there for people to come back and get back to work and get things ready,” he said.

Antonelli, meanwhile, favoured the same option to avoid a meeting in spring break.