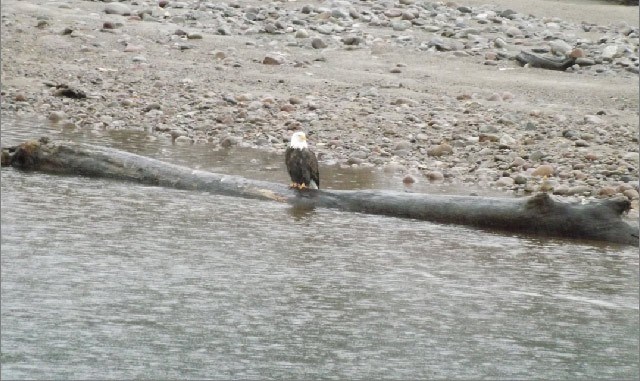 EAGLE EYE A lone eagle watches over the Squamish River at Eagle Run in Brackendale on a cold first Sunday in January while volunteers counted 694 eagles from the top of Howe Sound to the Elaho River. Photo by John French

No records were set but at least the number of eagles observed at the annual raptor count in Squamish was up from last year.

More than 50 volunteers came out on Sunday, Jan. 6 to count eagles along the Squamish River, the Mamquam River and a few other eagle-gathering spots in the Squamish Valley. This was the 27th annual count hosted by Thor and Dorte Froslev at the Brackendale Art Gallery. The volunteers braved rain and cold temperatures to gather up the statistics.

A total of 804 eagles were tallied over the course of the day by the civilian counters, who looked for eagles from the top end of Howe Sound to as far north as the Elaho River.

According to Froslev, the count isn’t scientific but it gives scientists some solid data to work with.

One of the count volunteers was Hazzard Romey. He is a rafting guide who floated a team of counters down the Squamish River from the Ashlu Bridge to Fisherman’s Park in Brackendale.

Romey and his team of four counters spotted 147 eagles and they got an additional surprise when they saw an elk on the riverbank.

“The world of the day was majestic,” said Romey after his team reported their count result at the Brackendale Art Gallery. “The mist in the trees, the quietness, the lichen hanging off the trees, just overall it was so majestic.”

Check back on Thursday in the Pique’s print edition and online for more from the eagle count.