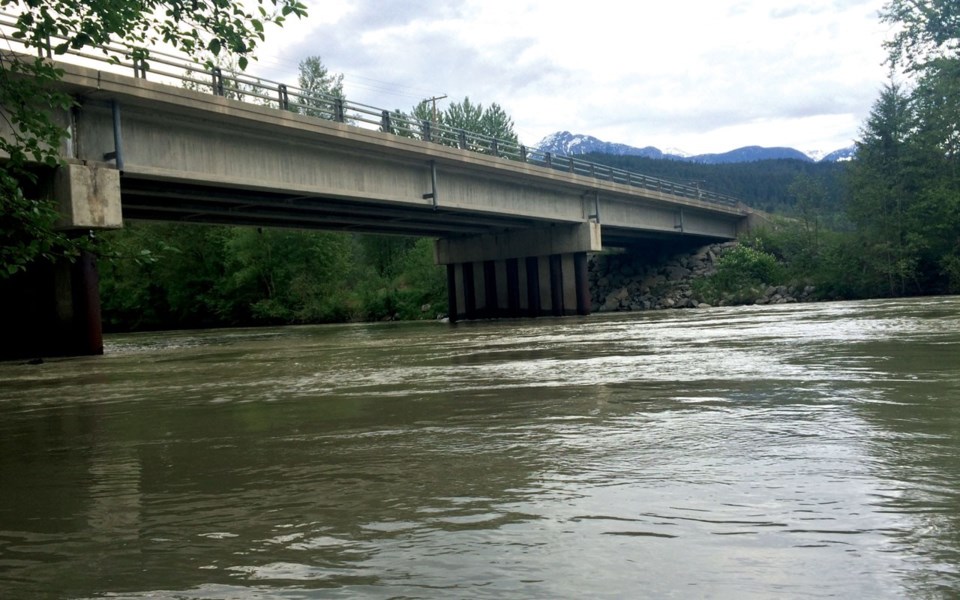 Early warning In its July 24 council meeting, the Village of Pemberton voted to fund a portion of the maintenance costs of the Lillooet River Early Warning System. Photo by Joel Barde

Village of Pemberton (VOP) council agreed to help cover the costs of maintaining the Lillooet River Early Warning System at its July 24 regular council meeting, but questions remain about how it will contribute to the monitoring of it going forward.

Steve Flynn, operations and maintenance manager for the Pemberton Valley Dyking District (PVDD), has been monitoring the system since it was established in 2014.

He feels it's time for the Village to step up to the plate and contribute to the monitoring of it as well. "I've been doing it for four years, and it's time for one of the other local government's to do it for a little while," said Flynn.

The system was established in the wake of the 2010 Mount Meager landslide, a massive debris avalanche that destroyed local bridges and roads.

The slide caused two dams to be formed, posing a significant threat to downstream communities, including Pemberton. The Village, the Squamish Lillooet Regional District (SLRD), and Lil'wat Nation all declared a local state of emergency and issued evacuation orders, but the dams ended up releasing in a way that was slow in nature, according to a letter to council from the PVDD.

A subsequent investigation by specialists and subject-matter experts determined that several landslides large enough to cause flood waves that travel the entire length of the Pemberton Valley are expected over the next few decades according to the letter.

"It has been determined through an emergency planning process involving the VOP, SLRD, Lil'wat Nation and the PVDD that any of these large scale events has the potential to result in significant loss of life and damage to property and infrastructure," it reads.

The PVDD said in the letter that it worked closely with the Village, the SLRD and Lil'wat Nation, to secure $30,000 in provincial funding for the monitoring system, which is located at the Hurley River Forestry Bridge and monitors rapid changes in water elevations, and that it was understood that the Village would contribute to the funding and maintenance of the system.

Last summer, the PVDD approached the Village to purchase and support the installation of a camera at the site, as well as agree to fund costs associated with the operation and maintenance of the system.

The Village agreed cover the camera costs, but declined to agree to pay for ongoing monitoring and maintenance costs.

The decision came as a "total surprise" to Flynn, who said he was never given a clear explanation as to why.

According to Pemberton Mayor Mike Richman, last summer's decision should not be viewed as a vote of non-support. He said the Village has always been supportive of the monitoring system.

"In other words, how it was going to get shared among all the communities."

Presented with the PVDD letter stating its case, Pemberton council agreed to fund 25 per cent of all costs associated with the maintenance and operations of the system at the July 24 regular council meeting.

The PVDD, however, is also calling on the Village to contribute to the monitoring of the system, and it wants the Village to establish an emergency response plan in coordination with Lil'wat, the SLRD, and the PVDD.

"It is the opinion of the PVDD that a monitoring plan that includes only one person, one cell phone and one computer is very dangerous and unacceptable to ensuring the safety of our community," states the letter.

During discussions with council, Nikki Gilmore, chief administrative officer for the Village, said that having a member of Village staff attend to the warning system could be costly.

"If council is agreeable to having those types of expenses incurred, that's something that could be explored, but right now it's not budgeted. It's a four-hour call-out minimum for any member of the union. It would be a significant impact to the Village," she said.

"My next step is to meet with (the) EPC (Emergency Program Coordinator) to talk about the work plan," said Gilmore.

According to Richman, at this point, the Village is looking at monitoring options, such as paying someone to respond, or training people from the various benefitting communities to do the job.

"At this point, I feel having someone local in that area, who is trained and ready to respond might be one of the best ways, but you need more than one person to monitor this thing," said Richman.

As for Flynn, he said he is hopeful for a speedy resolution.

"We're just happy that the four local governments are all working together again on the initiative, but now we have to get together and get some help on the monitoring side," he said.