When a pandemic comes to a disaster nurse's backyard

We should be grateful for our healthcare system, says Squamish nurse who worked Ebola and other crises around the world
Jun 2, 2020 8:00 AM By: Jennifer Thuncher/The Squamish Chief 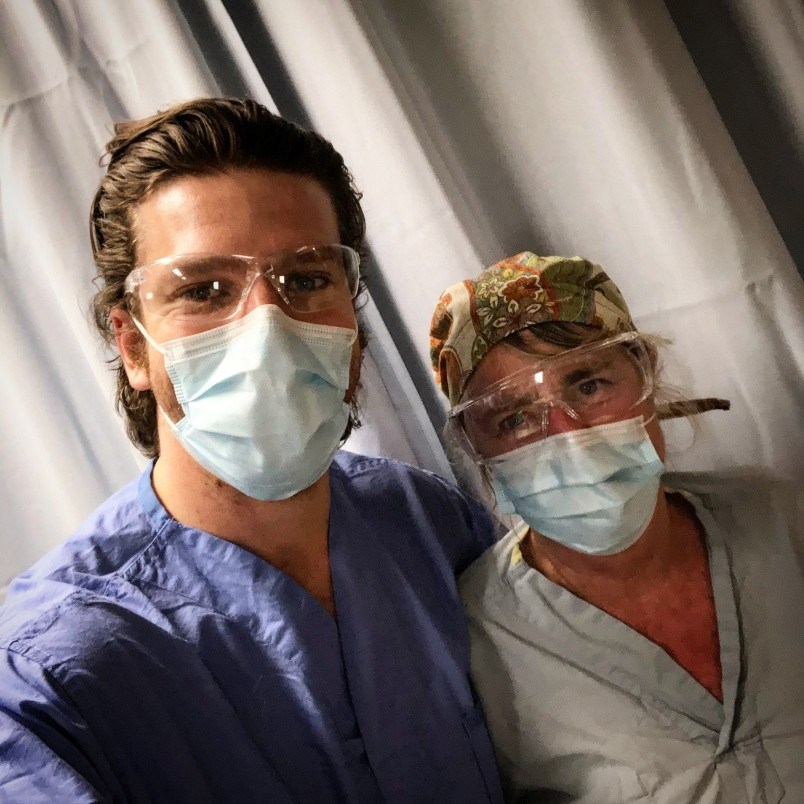 Ian MacKay and his mom, who is also a nurse. Photo: Courtesy Ian MacKay

Ian MacKay apologizes for being in a bit of a daze, though to an outsider, he seems completely alert.

When interviewed at the end of last month, the Squamish critical care nurse had just finished five nightshifts at Lions Gate Hospital, where he works in the ICU and emergency department.

MacKay, who was born and raised in Squamish, said working through COVID-19 has been different from his other stints working in critical care around the world.

Most recently, he returned from a February trip to Libya where he was working with a pediatric heart team.

In mid-March, he jumped right back on the front lines to fight the pandemic here.

"It has been eye-opening for a lot of people," he said.

"This current outbreak gives us a small glimpse into what hundreds of millions of people live with every day. It should be making us more grateful for what we have here-the access to healthcare and resources."

Lions Gate Hospital is the main centre for COVID-19, as far as the North Shore is concerned, and a lot of people funnel into there, he noted.

Vancouver Coastal Health authority was very well prepared for the COVID-19 cases they faced and leadership did a "phenomenal job" in addressing the outbreak said MacKay, adding that working back in Canada he was grateful to see the supply chains and information coming through to healthcare workers.

MacKay was also on front lines of healthcare in Liberia during the 2014 Ebola crisis.

A co-worker tested positive for the virus while they were there-the first-ever foreigner to get the virus in West Africa, MacKay said.

Soon, another colleague came up positive. Both survived, but it was uncharted territory for the team.

"People always joke that my history of disaster response in things like infectious disease and conflict sort of prepared me for this moment-to fighting a battle in my own country," he said, but in fact it is much different facing a pandemic in one's own backyard.

"When you are overseas in a disaster, when your time is up, you sort of go back to your regular life. In this situation, COVID is now a reality. It is not going anywhere fast and people are going to have to make adjustments to their daily life."

MacKay, 29, has also had three deployments to Iraq, the last in 2017, where he worked with the Christian international relief organization Samaritan's Purse.

In 2016, he helped quake victims in Ecuador.

One of his first trips to a disaster zone as a nurse was to an earthquake-ravaged Haiti in 2008. Later, he helped in war-torn Democratic Republic of Congo (DRC) in 2013.

"There was a lot of moral distress in some of the countries that I worked in, not having access to the necessary resources. Some of that resulted in preventable loss of life," he said. "We are trained to this high level in North America, with our healthcare system, but when you are in those environments, you are focused on utilitarian healthcare. You are trying to make the biggest difference possible, on the most amount of patients."

MacKay learns something that makes him a stronger nurse each time he faces a new health crisis.

The biggest lesson he has learned along the way is to "choose compassion over fear."

During both the COVID-19 pandemic and the Ebola outbreak, MacKay observed that healthcare workers form strong bonds.

"You have someone to talk through things," he said.

What has been notable and special to him in dealing with the pandemic at home is being able to work with his mom, who is also a nurse, at Lions Gate. They commute to work together, which has been a unique opportunity, he said.

"It is important to recognize the beauty in the time of crisis," said MacKay. "We aren't living this alone. We are living it with others."

MacKay did offer an observation on social media in this pandemic, which is the "modern-day battlefield" where fear and misinformation can spread.

"It is so easy to get caught up in that," he said. "Until you have seen inside a COVID ICU, I don't blame you for not understanding the true impact of this outbreak."

He said the first time he heard the 7 p.m. cheer for front line workers, it was extremely emotional.

"Just because we are nurses does not mean we aren't scared," said MacKay. "We are incredibly vulnerable in the medical system and it was amazing to have others recognize that."

His message to Squamish residents is to listen to health experts.

"We have done a very good job so far. It is not over ... but things will get better and that is just going to take some time for us."

Next, MacKay heads to the Northwest Territories to perform COVID screening.