Local Robyn Allan has submitted a report to the British Columbia Utilities Commission inquiry into gas prices—but not everyone agrees with her conclusions
Aug 6, 2019 12:00 AM By: Joel Barde 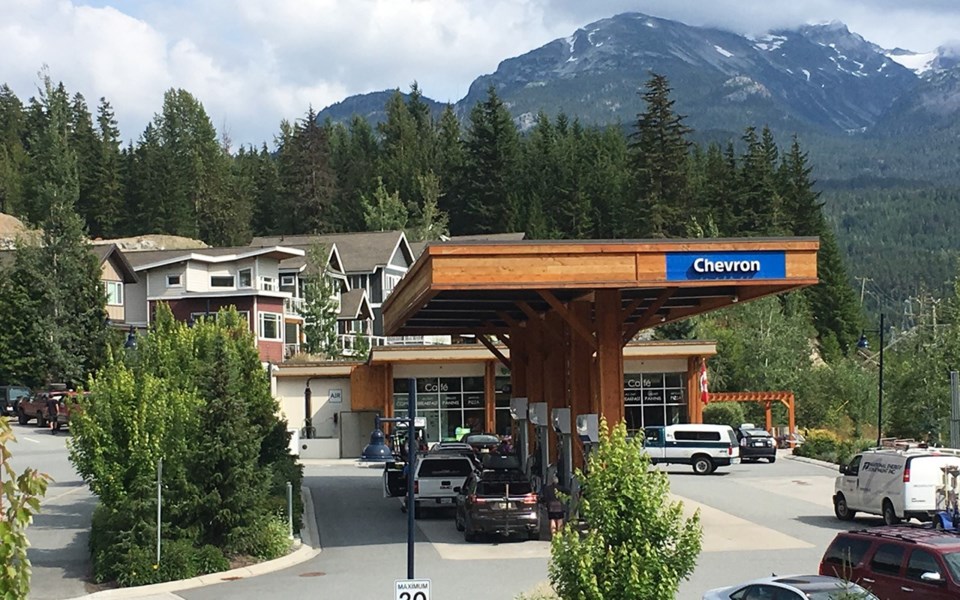 The Green Lake Chevron Station in Whistler's Rainbow neighborhood is supplied by Parkland, one of five companies that supply the vast majority of the province's refined gasoline. Photo by Clare Ogilvie

What's going on with gas prices in this province?

That question has been on the mind of many in recent times, with gas prices hitting $1.70 per a litre in the Sea to Sky corridor in May and major volatility in pricing in recent years.

Whistlerites pay considerably more at the pump than both Squamish and Vancouver when you factor in the 18.5-cent TransLink tax paid by Vancouver drivers.

With no easy answers and a multitude of factors at play, the provincial government has tasked the British Columbia Utilities Commission (BCUC) with conducting an inquiry into gas prices in the province, with the results expected at the end of August.

As part of the inquiry, Whistler local and former CEO of the Insurance Corporation of BC Robyn Allan has submitted a report to the BCUC.

The report—written with Marc Eliesen, former chairman and CEO of BC Hydro—argues that there is a lack of competition among the province's gas suppliers and calls for the BCUC to be given the power to regulate gas and diesel prices in B.C.

"This report finds that an absence of competition among refined product suppliers has caused the market to fail," it reads. "Price is not a function of cost plus a reasonable return on investment as should exist in a functioning market. Price is a function of what the market can bear. This is price gouging."

In an interview with Pique, Allan said there are essentially five companies that supply the province's refined gasoline: Parkland, with its own refinery in Burnaby; Husky, which owns a refinery in Prince George and mostly serves northern B.C.; and Suncor, Imperial Oil and Shell—all of which have refineries in Alberta.

The market is overly concentrated, and "when a market is concentrated ... it means there aren't a lot of independent suppliers who become disciplined in their pricing due to competition," said Allan.

That said, Allan believes that the problem isn't one for the Competition Bureau of Canada to address, as the companies are not getting together in backrooms and colluding.

The market, rather, is so small that firms can easily recognize when there are constraints on supply, and then set their prices accordingly.

"They aren't going to get into a smoke-filled room and decide what they are going to do," she said of the companies. "They don't need to because they understand how the market works."

Regulation through the BCUC, she said, could help correct the market and promote competition.

"You regulate because the market has failed," she said. "It's no longer competitive, and you want to inject competition back in by managing the prices to reflect cost plus a reasonable return on profit."

While Allan's conclusions have received major support in some progressive circles—with The Tyee running an article on the report's findings that was shared more than 7,000 times—some take issue with Allan's arguments and call for government regulation.

"Regulating oil companies through the BCUC is also not an option," said Werner Antweiler, economist at UBC's Sauder School of Business, in an email to Pique.

"Anyone who suggests that high gasoline prices can simply be lowered through regulation does not understand energy markets."

According to Antweiler, there is a "significant amount of competition" in both retail distribution of gasoline and crude oil supply.

Moreover, unlike Allan (who argues that the "evidence shows that there is no lack of supply") Antweiler said that a lack of transmission capacity is a factor in the high prices.

"The result is that at times we are bringing refined product to BC from greater distances, sometimes even from the U.S. Gulf Coast," he said. "That adds to cost."

Antweiler also sees the high cost of real estate as a "contributing factor" as "higher land cost translates into a higher retail margin."

Local MLA Jordan Sturdy said he is waiting for the results of the BCUC's inquiry report before deciding on the best way forward.

Since February, his office has been comparing gas prices in Squamish and Whistler to those in North Vancouver.

"It's somewhere between a half a cent and a cent to transport fuel between Whistler and Squamish, so that doesn't account for that," he said.

Sturdy said this office will continue to monitor the price differentials between the communities, saying that it is especially important given a proposed 2.5-cent gasoline tax being proposed by Sea to Sky communities to fund regional transportation.

In a statement to Pique, Husky Canada—which sets the price for the Whistler Husky—said that its prices reflect market costs.

"As we said in our response to the inquiry, Husky endeavours to set retail fuel prices at the market rate and generally, retail prices move in correlation with the wholesale rack costs," reads the statement.

"At corporate stations, pricing decisions are generally made by a Husky District Manager in the region, in consultation with headquarters.

The Green Lake Chevron Station—which is supplied by Parkland—declined to comment, but clarified that as an independent retailer it charges a small margin over the price it pays to purchase the gas.