DriveBC says to expect major delays as crews work to extinguish the fire
Jun 24, 2019 4:30 AM By: Brandon Barrett 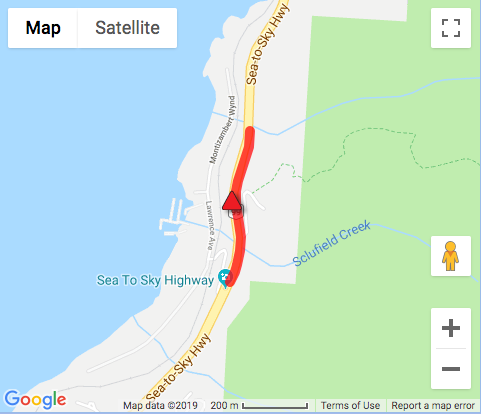 A map of the approximate location of a three-hectare wildfire along Highway 99 between Horseshoe Bay and Lions Bay that has slowed Sunday morning traffic. Screenshot from DriveBC

Firefighters continue to battle a wildfire that broke out Sunday, June 23 between Horseshoe Bay and Lions Bay.

The fire is estimated at about three hectares in size and is believed to have been started by a power line, according to BC Wildfire. Donna MacPherson with the Coastal Fire Centre says the fire has grown from its initial estimated one-hectare size when it was first reported at about 3 a.m. Sunday morning. Crews were on the scene by 4 a.m.

"This is a ground fire on a cliff, and folks are looking down through the trees to try to establish where the edge of the fire is," said MacPherson on Sunday afternoon. "Their best guess at this point is that it’s three hectares in size and it could go up and down depending on when we get around to getting someone to walk the perimeter of the fire."

DriveBC says the fire is located between Lawrence Way and Ocean Point Drive. Northbound traffic is being diverted into a southbound lane at Ansell Place.

The fire currently poses no threat to residents of Electoral Area A, according to the Metro Vancouver Regional District.

On Sunday afternoon, MacPherson said there were 27 firefighters and three helicopters on scene, with more resources on the way. The Ministry of Transportation, RCMP, Lions Bay Fire Rescue and BC Hydro are also onsite, she added.

Crews remained on scene overnight, with a flyover planned for Monday to get a better sense of the fire's size.

Check back with DriveBC for traffic updates.