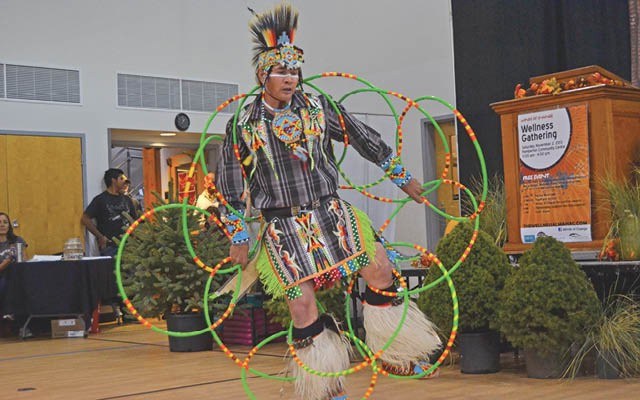 Wellness Gathering The future of drug harm-reduction group Winds of Change lies in the hands of Pemberton and Lil'wat Nation officials. A photo of the group's 2014 wellness gathering can be seen above. Photo by Eric MacKenzie

With the end of its second five-year mandate, the Winds of Change Steering Committee (WOC) is seeking direction from the Village of Pemberton and Lil'wat First Nation.

The WOC was formed in 2004 as a means of addressing substance abuse issues in Pemberton, Mount Currie and Area C of the Squamish-Lillooet Regional District.

A recent independent evaluation was conducted to determine the effectiveness of the committee.

"The evaluation was very positive about the Winds of Change, but it does recognize that it's difficult to measure the impact," said Sheldon Tetreault, chair of the WOC.

In the past five years, the WOC has changed its messaging to speak more about "building community strength, resilience and well-being and community connections," Tetreault said.

"It's kind of a more positive type of messaging, and that's been successful."

Tetreault presented the findings of the evaluation at the May 5 regular meeting of Pemberton Council — a similar presentation with the Lil'wat Nation will follow.

The evaluation presented three possible recommendations for the future — continue the WOC, reinvent it or disband it.

Discussions will take place in the coming weeks between Pemberton and Lil'wat over what direction the WOC should take.

While the future of the WOC is unclear at this point, Tetreault said it has been a driver of good relations between the involved parties.

"I think everyone who's been involved directly with it would concur that it's a very unique and valuable initiative, and what's amazing to me is we get all kinds of recognition from outside of the community for this kind of collaborative work that we're doing between Lil'wat and Pemberton," he said.

Also at the May 5 meeting, three bylaws related to Pemberton's 2015 budget passed their fourth and final reading.

Included in the bylaws is a three-per-cent tax increase that will be allocated to the Village of Pemberton's capital reserve for the purpose of road improvements.

The Community Centre Parcel tax has been reduced completely, going from $73.30 per parcel to $0 in 2015.

In a draft document comparing the potential impacts of different tax increases, the three-per-cent increase shows a monthly increase of $10.63, based on average assessment.

The Locke Academy private school project has pushed its opening back a year.

"We've made tremendous progress and have been thrilled with the interest from local families and the support we've received from the Village of Pemberton and the Pemberton Chamber of Commerce," a statement on the Locke Academy website said.

"Very recently, we were approached by a group with significant financial backing, resources and experience in the development of independent schools. They want to work with us to bring a bigger vision of a Locke Academy to reality."