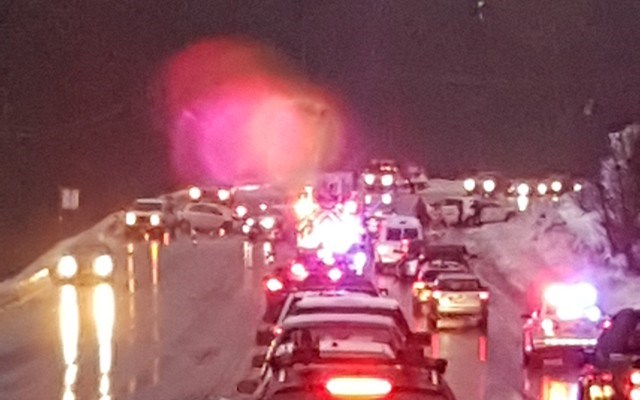 Police are investigating a report from a woman who alleges she was assaulted in an alley near a Whistler nightclub.

Just after midnight on Jan. 15, police received a call from a friend of the alleged victim saying that her friend had just been assaulted 30 minutes earlier by an unknown male.

Police attended the hotel where the woman was staying, and urged her to see a doctor for a sexual assault examination. The woman was then taken to a North Vancouver hospital for assessment.

The suspect is described as Caucasian, in his 20s, about 5-10 in height, slim build, brown hair with stubble, wearing a grey hoodie.

No major injuries in seven-car pile-up

At approximately 7:45 a.m., police said a car travelling about five kilometres south of Function Junction drifted over the centre line, setting off a seven-car pile-up.

Although the vehicles involved suffered significant damage, LeClair said there were no major injuries.

Police said inclement weather and icy roads are believed to have played a major role in the crash.

Whistler police are searching for a suspect linked to a reported sexual assault dating back to November.

On Jan. 10, Montreal police contacted local RCMP after a woman reported she was sexually assaulted by her then-boyfriend two months earlier. She claimed the man returned to their RV “drunk and aggressive” and injured her shoulder, police said.

After the alleged incident, the woman said she broke up with her boyfriend and traveled to Montreal with a friend, where she was urged to speak to police.

The file remains under investigation as police are unsure of the suspect’s whereabouts, said R. Cstb. Steve LeClair.

A woman told police last week that she was groped on a dance floor at a village club.

Just after midnight on Jan. 14, the woman contacted police to say that she had been “grabbed from behind… in the genital area,” according to LeClair.

A witness reportedly saw the incident, pushed the suspect, and a fight ensued. The complainant, witness and a second witness were all kicked out of the club by staff following the fight, police said.

Mounties also escorted the woman back through the club later in the night to see if she could locate the suspect, to no avail. RCMP officers are the process of reviewing surveillance footage from the club in an effort to identify the man.

If at first you don’t succeed, try, try again.

That was the approach taken by a 25-year-old Ontario man residing in Pemberton after he was arrested not once, not twice, not thrice, but four times over the Martin Luther King weekend.

The first run-in with the law came on Jan. 14 when police observed a Red Pontiac approaching a roadblock at the entrance to Day Lot 4. Detecting an odour of liquor on the driver’s breath, the officer requested a roadside screening demand. After several attempts, police said the man failed to provide an adequate breath sample. Then, checks revealed the man wasn’t allowed behind the wheel due to an earlier drunk-driving arrest.

He was arrested for driving while prohibited and failing to provide a screening demand and released from custody.

Unable to help himself, only hours later our tragic hero was in handcuffs once more when he was caught hurling profanities at an officer on foot patrol in the village.

“The officer recognized him to be none other than, lo and behold, the same male who was busted (previously),” said LeClair.

Then, on the night of Jan. 17, just for good measure, the suspect was arrested and ejected from a village pub for causing a disturbance.

The man ended up spending the night in custody, although, unfortunately for him, he did so without his jacket and woke up the following morning presumably cold and bitter.

“Upon release from cells that morning, officers noted he was upset he didn’t have his coat, which was not brought with him at the time of arrest,” LeClair said.

So what did our criminal mastermind do? Well, he smashed the front window of the pub and got his coat back, of course.

“CCTV footage shows him breaking the window at the pub, entering the bar, taking his coat and backpack from a storage area and leaving through the front door,” added LeClair. “We’re pursuing charges of mischief as well.”