Gina Prince-Bythewood knows what good fighting looks like. The “Love & Basketball” director has been an athlete her entire life, but she also just loves action movies.
Jul 7, 2020 12:42 PM By: Canadian Press 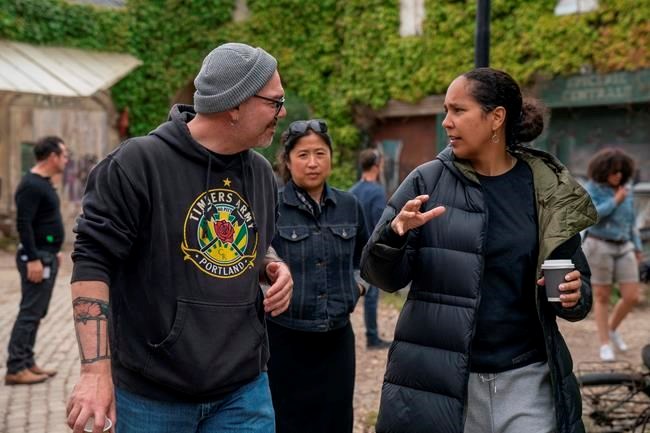 Gina Prince-Bythewood knows what good fighting looks like. The “Love & Basketball” director has been an athlete her entire life, but she also just loves action movies. So when she started dreaming up the template for a bare-knuckle clash between Charlize Theron and KiKi Layne in the new Netflix film “The Old Guard,” her bar was high: the bathroom fight from “Mission: Impossible—Fallout.”

“It’s a perfect fight scene. I wanted ours to be as dope as that,” Prince-Bythewood said. “We wanted the audience to feel like they were in the fight, to feel the slams into the wall.”

For her, that meant not cheating by having “flyaway walls” in the aircraft that would make it easier to move the camera around or relying too heavily on stunt doubles who she’d have to cut away from.

The pressure was enormous. It was the first scene she shot on her first ever big budget action pic that was over 10 times the budget of her last film. She only had five days to do it, where the “Mission: Impossible” team had a month. And it was an historic moment: Before “The Old Guard,” a Black woman had never directed a comic book film. She was acutely aware of the milestone.

“The fact that we’re still having firsts is ridiculous,” Prince-Bythewood said in a phone interview last week. “I knew I could do it. Hollywood just hasn’t caught up to me yet.”

On Friday she’s going to get the biggest audience of her career when “The Old Guard” debuts on Netflix to subscribers in 190 countries. And she can’t wait to know what that feels like. Although “Love & Basketball” and “Beyond the Lights” are beloved by critics and audiences, neither have exactly been runaway hits at the box office, hampered by limited distribution plans informed by incorrect assumptions about the reach of films with Black leads. Her biggest to date, “The Secret Life of Bees,” from 2008, made just under $40 million. The Netflix scope feels like a victory that’s been a long time coming.

“After all these years of fighting for any sort of distribution and being told these stories, these characters don’t travel? And now, 190 countries? I can’t get over that,” she said.

Skydance Media approached Prince-Bythewood to direct “The Old Guard,” an adaptation of Greg Rucka’s comic book about a group of mercenary immortals. She’s picky about her projects and writes most of them. In her over 20 years in the business, she’s only directed five films. But this struck a chord with her: It was an action-drama, the leads were women and one was Black. And she was being asked to infuse the action -- even the plane fight--with character-driven drama.

“She was still able to bring that deeper emotional work that she shows in her films,” Layne said of her director. “It was nice to see that blossom here.”

Prince-Bythewood is used to fighting for herself. It goes all the way back to childhood when she wanted to play sports.

“There were no girls’ leagues,” she said. “Boys often didn’t want me and my sisters out there.”

She was undaunted though and became the first girl to play kickball at her school.

“I was real good at kickball,” she added with a laugh.

Not taking an initial “no” is how she got into UCLA’s prestigious directing program, landed her first writing gig on the television show “A Different World” and the only reason “Love & Basketball” and “Beyond the Lights” exist. Her drive, she thinks, stems from being an athlete.

“It’s so much about ambition and stamina and outworking everybody,” she said. “That mentality drives who I am as a director. And this industry early on was constantly telling me that my stories weren’t worthy or valid. I kept having to fight for my space.”

She feels like she’s finally in a good place, however, thanks in part to the enduring affection for “Love & Basketball” and “Beyond the Lights," which often get mentioned in meetings. Her next two projects focus on Black women and, she said, for the first time she didn’t have to fight for them.

But she still feels immense pressure to succeed with “The Old Guard.” Opportunities are rare for female directors on the blockbuster level, and even rarer for women of . It was only a few years ago that Ava DuVernay became the first woman of to direct a live-action film with a budget over $100 million. (DuVernay is also joining the superhero club with the DC film “The New Gods”).

To ease her nerves, Prince-Bythewood met with a fellow trailblazer, “Wonder Woman” director Patty Jenkins, before shooting. She said Jenkins was helpful.

“What she achieved under that pressure was really a beacon of light for me,” Prince-Bythewood said. “It is really hard making a film like this. It’s 63 days of shooting and nine and a half months overseas in hard prep. And you’re reminded every day that you cannot fail.

“Because if I fail, I kill it for the next group of Black women who want this opportunity.”