A sales boom for RVs; campgrounds brace for snowbird wave, even in winter

Campgrounds expect the rush to continue into the fall and winter if snowbirds stay in warmer provinces
Sep 2, 2020 11:00 AM By: Darron Kloster 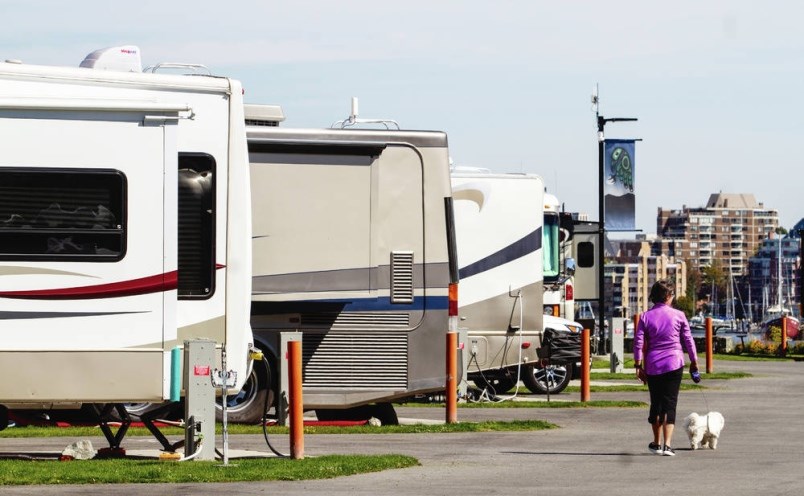 The largest recreational vehicle dealer in the province said it has been a record summer for sales, and he credits health orders to get outside and social distance during the pandemic for the surge.

Campgrounds, already at full capacity, expect the rush to continue into the fall and winter if snowbirds that usually head south flock to Canada’s warmest province if the U.S. border stays closed.

Craig Little, president of Arbutus RV and Marine Sales, said business is up between 25 per cent and 40 per cent at his five dealerships on the Island, and everything is selling—from used small starter units for a few thousand dollars to large luxury models reaching up to $150,000.

And Little doesn’t expect it to change when the leaves start to fall.

With border restrictions likely to remain and snowbirds spending the winter months staying closer to home, he said the Island will be a popular destination for its milder climate and numerous public and private campgrounds.

“We’ve seen a huge increase in the number of people getting into RVs, many for the first time, and it is because of COVID,” said Little, who has operated Arbutus RV with his wife, Rose, for the past 32 years.

“June and July were the best months we’ve ever had. [The pandemic] has created opportunities for people to get outside after being locked down for weeks or months.”

This week, Little closed a deal to acquire Coast RV Sales & Service Ltd. in Parksville, giving the company a sixth location and a key hub around some of the Island’s major campgrounds, including Rathtrevor Provincial Park and the gateway to the west coast and North Island.

RV parks have been seeing record turnouts and are bracing for more winter visitors than usual.

Don Sharp of Holiday Trails Resorts, which operates five parks in Alberta and B.C., including Country Maples Resort near Chemainus, said RV reservations have been increasing at all its parks.

“We anticipated that it was not going to be a very good year,” said Sharp. “But June, July and August have been very, very busy—and it’s definitely because people are being asked to go outside and stay close to home.”

Sharp said the company is receiving a lot of calls from people asking about winter sites. Holiday Trails RV Parks in Hope and near Chilliwack were initially used as self-isolating areas for snowbirds returning from the U.S. in March.

Sharp said RV parks usually trim available sites down to about 20 per cent capacity in winter time. But this year, Holidays Trails will open as many sites as it can to accommodate an influx.

Expanding some parks will depend on the depth of water wells in some locations, as those sites often freeze.

Joss Penny, executive director of the B.C. Lodging and Campground Association, which represents 400 members that manage more than 20,000 camping and RV sites in the province, said owners are preparing for a winter rush if the border stays closed.

He said 50,000 to 200,000 Canadians live year-round in Canada without a permanent residence and many have RVs.

There are an estimated 55,000 camping spots in B.C., including both private and government-run. The province is considered to have the mildest winter climate, but many campgrounds still have to adjust or install water, sewage and electrical capacities.

Only about 100 private campgrounds currently have year-round sites.

“We don’t have enough campgrounds for all of them,” said Penny.

He said the association is already in talks with hotel groups about the possibility of opening their parking lots or housekeeping suites for RVers to use.

“The big question will be whether the border opens,” said Penny. “If it does in January, will they all go? I don’t think they will because there is the possibility of a second wave.”

J.J. Belanger, general manager of Crystal Cove Resort in Tofino, said the 1,000 RV sites between Tofino and Ucluelet have been booked solid all summer. In fact, reservations for Crystal Cove’s 70 sites are already 80 per cent booked for next summer, and enquiries about winter reservations are starting to pour in.

He said private campground operators are asking hotels about potential partnerships to accommodate a projected influx of RVers.

“You’ve got a couple of hundred thousands snowbirds in this country, and the only place they are coming is B.C. They won’t be camping in Manitoba in the middle of winter,” said Belanger.

He’s heard of RV parks on the east side of the Island already booking up for the winter.

Greg Robson, who has owned Greg’s RV Place in Duncan for 21 years, said despite worries in March and April when the pandemic lockdown began, sales reached a brisk pace through the summer.

But he’s mindful that the overall economic picture remains bleak for some.

“I feel very fortunate it’s happening, but I’d feel better if everyone was doing well,” Robson said. “Can you imagine running a restaurant and only operating at 50 per cent?”