A Scotland most visitors never see 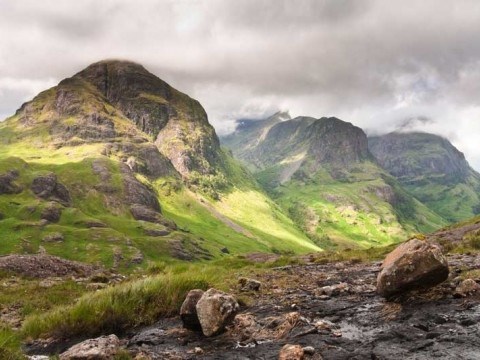 A little while later we draw into the hamlet of Laggan Bridge. "You'll recognize this," he says. "This was the village of Glenbogle in (the TV series) Monarch of the Glen ."

Then he talks of General George Wade, the British Army engineer who built many of the roads in these Highlands in the 18th century - roads that we're travelling on today. "Wade opened the Highlands to the world," he says. "There's an old rhyme: 'If you'd seen these roads before they were made/You'd lift up your arms and bless General Wade.'"

Local gossip, local happenings, local history: it's all part of a day out with David Kellie. But he's not a tour guide, he's the postman.

His vehicle, a four-passenger Renault 4X4, is called a postbus and it's licensed to carry passengers. It may well be the best tourist bargain in Scotland. For £2.50 (about $5) he'll take you on a 150-kilometre odyssey through some of the most beautiful country in the Highlands... country that most visitors never see. Just be prepared to stop a lot-but that, too, is part of the fun as you get to chat with, maybe, the country doctor or the hill crofter or the big-city author trying to get away from it all.

They all know the postman. Even the dogs. That's why Kellie carries a bag of dog biscuits. "He always waits for his treat," he says as a Scotch terrier (what else?) darts across a farmyard as we pull in.

Kellie's run takes us through country familiar to Canadian viewers who enjoyed the BBC's syndicated series Monarch of the Glen , passing places like Ardverikie House (Glenbogle House on the screen), Laggan Stores (McKechnie's shop) and Pattack Falls, where the laird of Glenbogle courted schoolteacher Katrina.

The British postal service, the Royal Mail, began the postbus service in 1967 to provide transport to people living in out-of-the-way places in England, Wales and Scotland where not everyone has a car and there's no public transit. Tourists are welcome to hop aboard. Some even take the postbus to a remote spot and then trek back.

There are generally two services, morning and afternoon, each weekday, with Saturday morning services in some areas. You can hail the postbus at any point along the route.

At its peak there were more than 230 postbus routes, but the service has been declining as car ownership increases. Today there are 38 routes in Scotland, most in the Highlands and islands.

On this day, after the Monarch locations, it was off to the hinterland to places a tourist is unlikely to see.

This is another world entirely, a world where, if the householder is out, he leaves the key in the front door so the postman can drop the mail off in the kitchen; a world where the postman picks up as well as delivers mail, and even delivers prescriptions from the pharmacy.

For more information, visit the Royal Mail website at www.postbus.royalmail.com .

For information in travel in Scotland go to the Visit Scotland website at www.visitscotland.com .

Scotland: "Macbeth's castle" has own tales to tel l

INVERNESS, Scotland-"All hail, Macbeth! Hail to thee, Thane of Cawdor." And so saying, the Second Witch set Macbeth and his lovely wife on the path to their own greed-fuelled destruction, with plenty of grisly killings along the way.

In Shakespeare's play, Macbeth is told by the three weird sisters he meets on a blasted heath that he will become the thane of Cawdor (a thane is a noble holding land from the king) and, better still, "shalt be King hereafter."

There really was - and is - a thane of Cawdor and a Cawdor Castle, which you can visit. Some people think it's where Lady Macbeth would have uttered her famous speech ("Come you spirits that tend on mortal thoughts, unsex me here, and fill me from the crown to the toe, top-full of direst cruelty!") as she worked herself up to plunge a dagger repeatedly into the sleeping King Duncan, thus clearing her husband's way to the throne.

In fact, in Macbeth it's another castle, Inverness, where Duncan spends his last night, not Cawdor. You don't want to go there: the Inverness Castle that now exists is a pale, 19th-century imitation, and serves as the sheriff's office.

But Cawdor Castle, about 16 km east of Inverness, certainly evokes the right mood if not providing the historical accuracy. The keep, built in the mid-1400s, is properly tall, dour and forbidding. There's also the dark, but much more comfortable, 17th-century wing where the family, which still lives here, spends most of its time.

And this family, the Campbells, has its own colourful and occasionally bloody history.

One of the most notorious incidents happened at the start of the 16th century when the eighth thane of Cawdor died, leaving only a baby daughter, Muriel, as heir. The earl of Argyll, the most influential man in Scotland, kidnapped her. A half-dozen of his men were killed by the posse from Cawdor that unsuccessfully pursued the stolen infant. When she turned 12, she was married to the earl's younger son, Sir John Campbell who then became Cawdor's lord.

Surprisingly, the marriage turned out to be a good one, despite the fact that Muriel, when she was kidnapped, had been branded on the hip and had had the top joint of a little finger bitten off for easy identification.

The family's subsequent history includes murder and insanity, and a modern-day squabble between the current dowager countess and her late husband's children by his first marriage.

Angelika Lazansky von Bukowa, a countess in her own right and the second wife of the sixth earl of Cawdor, who died in 1993, still lives in the castle part of the year. She and the earl's son and daughter, Colin (the seventh earl) and Liza, don't get along, partly because the late earl left much of his estate to her rather than them. In 2006 Liza published Title Deeds , a book that takes a huge strip off daddy dearest and his choices. Reading it before you visit will add as much to your tour as revisiting Macbeth .

For more information on Cawdor Castle visit its website at www.cawdorcastle.com . The castle is open from the start of May to mid-October.

For information on travel in Scotland go to the Visit Scotland website at www.visitscotland.com .