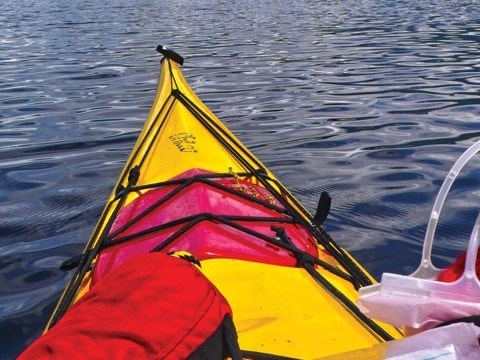 A sea kayak trip to Desolation Sound engages all five senses at once: sniff ocean breezes perfumed by wild rose and salal blossoms; taste salt water on fingertips; listen as the sound of pure silence fills the air; touch granite walls curtained with kelp and oyster shells; and watch velvety mountain ridges rise resolutely through clouds to glaciers on high. That's just for starters. Keep track of everything that catches your attention over a multi-day excursion and be astounded by the final tally: murrelets, kingfishers, hummingbirds, oyster catchers, eagles, mergansers, nighthawks, loons, and gulls framed against a backdrop of golden moss-covered slopes forested with ramrod-straight shore pines and shimmying arbutus. It's enough to overload one's central nervous system to the point of dizziness.

Don't be fooled: whatever your skill level, floating on the Pacific in a sea kayak is always a giddy experience. No matter how glassy the surface, paddling the inland sea stretched between the mainland and Vancouver Island resembles nothing so much as floating in a quivering bowl of gelatin. With practice, the sensation of imbalance gives way to one of gently swaying atop a slumbering giant. On the rocking cradle offshore the northern Sunshine Coast, the only sounds that rise above a profound peace and quiet are snortings and sighings as an inquisitive group of harbour seals pop up for a better look at brightly coloured ocean craft. A more magical place to explore while seated would be hard to imagine. Tap your foot gently on a rudder pedal and glide among them. With every paddle stroke, equilibrium comes more naturally.

Once you've completed a guided sea kayak trip or two, confidence in setting out on your own grows. That's where Christine Hollmann, owner of Lund-based Terracentric Adventures, comes in. Her water taxi service offers just the sort of entrée needed by intermediate-level paddlers keen to explore Desolation Sound park's 30-kilometres of rocky, oyster-encrusted shoreline. It's fair to say that 41-year-old Hollmann, who grew up in nearby Powell River, knows every cove, bay, island, and freshwater lake in the marine protected area. "The park is hugely popular in summer," she told Pique during a visit in June. "September into early fall is when you want to be here. The water is bathtub warm, campsites free up, and the bugs vanish." Hollmann's local knowledge, from when shellfish are in season to the ideal spot to catch sunrise from the door of a tent, proved indispensable.

Just because Lund anchors road's end on the Sunshine Coast Highway doesn't mean that fun stops there. Quite the opposite, especially for those willing to trade wheels for waves. Pockets of islands provide boaters with a chance to witness what life off the grid truly looks like. That opportunity drew Elizabeth Kohler and partner Wendy Holmes of Spokane, Washington, to "Kilometre 0" on the world's longest stretch of roadway. After the experienced freshwater paddlers kayaked in the Strait of Georgia during a visit to Vancouver Island four years ago, they vowed to return. Pique journeyed into the park with them aboard Hollmann's water taxi as the duo marveled at the rainforest scenery. With less than a week at their disposal, the one-hour motorized ride into the park from Lund circumvented what otherwise would have been half-day's challenging paddle each way. With help from Hollmann in choosing a campsite, all that remained was settling in and day-tripping to a variety of scenic locales within the park. Holmes was particularly intent on viewing Homfray Channel, the steep-sided fiord that curves into the folds of the surrounding peaks rising above Toba Inlet. The best place to accomplish that turned out to be from the shelter of Prideaux Haven, characterized by sailor and author Laurence Yeadon-Jones as "the crown jewel of easy anchorages." Together with his wife, Anne, the couple returns regularly to Desolation Sound to update their series of Dreamspeaker cruising guides. "Rocks don't move," commented Yeadon-Jones when contacted by Pique . "Everything else damn well does." In the early 2000s, Yeadon-Jones said the Broughton Archipelago off the northern tip of Vancouver Island became the place to sail. "With the rise in fuel prices, Desolation Sound has regained popularity though it's no longer the party place it once was. Boaters seem more conscientious about noise, especially in places like Prideaux Haven, as equally special as it's ever been since we first explored there in the early 1990s. Generally speaking, Desolation Sound is a peaceful and respectful destination."

When viewed from the water level vantage point of a kayak, the sound's maze of islands blends seamlessly with the mainland. To make sense of the landscape, detailed charts are a must. In advance, consult as many sources as possible to prepare yourself for Desolation Sound's dizzying natural impact.

Pique contributor Jack Christie is the author of The Whistler Book . For details, visit jackchristie.com