Agape in the Galapagos

Born of primordial magma yet carved by earth's classical elements of wind and water, the wild islands of the Galapagos are so radically distinctive that there is no other place on the planet quite like them.
K.D. Leperi
Apr 29, 2014 2:25 AM
Previous Next
1 / 1 Galapagos penguin. Photo by Karin Leperi
Expand
Previous Next

Born of primordial magma yet carved by earth's classical elements of wind and water, the wild islands of the Galapagos are so radically distinctive that there is no other place on the planet quite like them. While this remote island archipelago straddles the equator more than 1,000 km west of Ecuador, nevertheless the climate is rendered cooler due to the frigid yet nutrient-rich Humboldt Current flowing from Antarctica along the South American coast.

The Galapagos may be isolated but they are far from desolate, as each island teems with a sundry of life that has specially adapted to that island's conditions. Because of their distance from a mainland to which it was never attached, naturally introduced flora and fauna functionally evolved over thousands of years of time, often with no predators. It is where natural selection and survival of the fittest was best demonstrated; inspiring a young Charles Darwin to contemplate a new theory so outlandish and so bold, that it took him 30 years before he dared to introduce his heretical premise to the world — that survival of a species required adaptive mutations to their environmental surroundings.

Owing to variations in geology, elevation, micro climates, prevailing winds, and precipitation, each island is uniquely different in terms of endemic flora and fauna. From cactus-cloaked desert isles and lava-strewn lunar landscapes, to mountainous highlands enveloped by lush verdant forests and shallow waters of tropical mangrove lagoons, these are the Galapagos in all their splendid diversity and singularity — hosting species found nowhere else in the world, each adapting in its own unique way to specialized surroundings.

Much of the wildlife in the Galapagos are endemic species, meaning that they are native to the islands and found nowhere else in the world. In fact, it might be an understatement to say that endemic species are what put Galapagos on the map. They are definitely the draw for many contemporary visitors who prioritize a Galapagos adventure on their bucket list. With roughly 9,000 species living on the islands and in the waters, the Galapagos are a haven for species uniqueness in functional adaptation.

One of the better-known endemics is the Galapagos Penguin, the only penguin to be found north of the equator and the only tropical-dwelling and breeding penguin. Scientists believe they were brought to the Galapagos by the Humboldt Current. The penguin mates for life, favouring crevices in old lava flows for breeding, and is found on islands where cool currents are to their liking. Easily recognized by their large bill and narrow white lines encircling their face, they have been declared endangered. 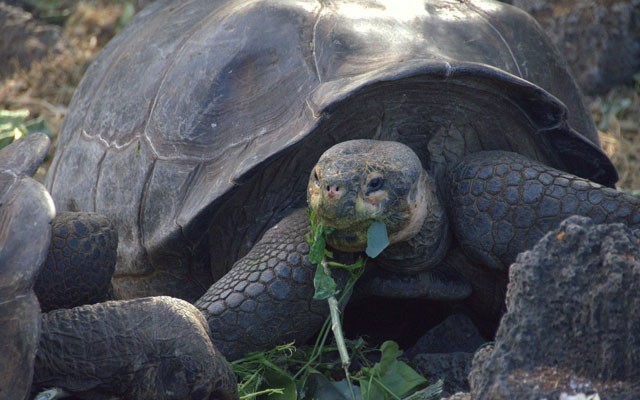 The Galapagos giant tortoise is the largest in the world, reaching weights of 250 kilograms and living an estimated 150 years. Unfortunately, their numbers have been severely depleted, from about 250,000 to 15,000 today. A total of 14 distinct subspecies live on the islands, with the carapace uniquely shaped on each island, having morphed through evolutionary development. The most famous tortoise was Lonesome George, a male from Pinta Island. An iconic symbol of conservation efforts, he died from heart failure on June 24, 2012, while comfortably residing at the Charles Darwin Research Station on Santa Cruz. It is believed he was over 100 years old. Extinct, but not forgotten, Lonesome George was the last of his subspecies. 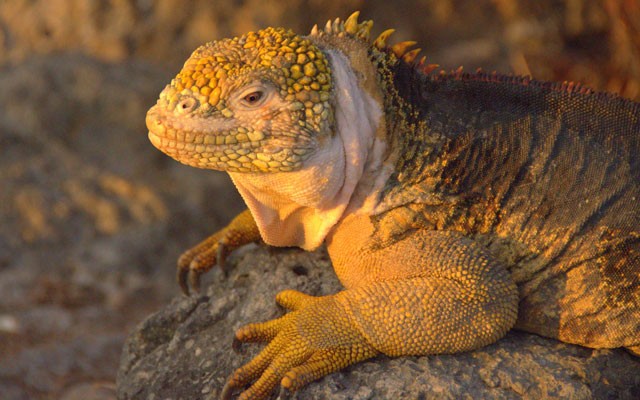 Land iguanas are distinct from their distant cousin the marine iguana. Measuring up to three metres long, some are known to live over 60 years. Their yellow-orange to brown-color skin make them distinguishable from the marine iguana, the only seafaring lizard in the world. The marine iguana is generally black and can reach one metre in length (On Espanola, the marine iguana sports green and red reptilian skin in lieu of lava black). It is thought that because of scarce land vegetation on certain islands, the marine iguana evolved a seafaring lifestyle to incorporate seaweed as their primary diet. 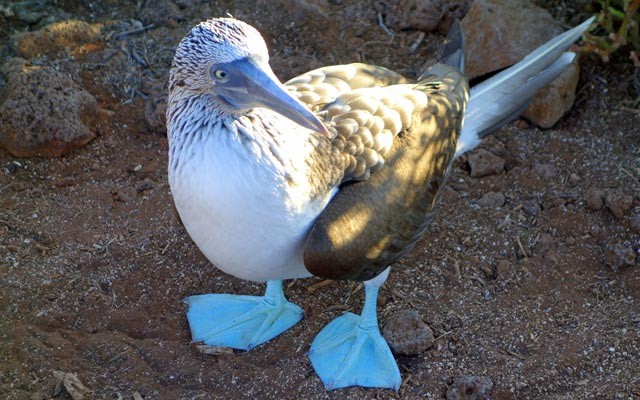 While much wildlife in the islands is endemic, other species are native, meaning they occur in other places. With that being said, about 30 per cent of the world's population of blue-footed boobies is known to breed in the Galapagos. What is particularly notable is their fearlessness. With no predators, they have stopped nest building and lay their eggs directly on the ground, surrounded only by a circle of guano. Known for its almost comical mating ritual, the male lifts his feet up and down, showing off their "blueness" while strutting for the female. 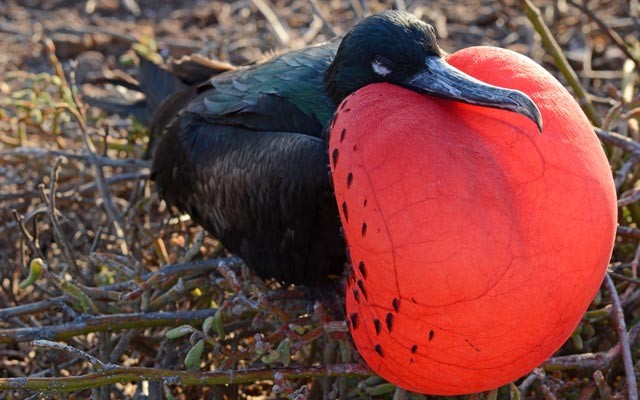 Named after the frigate ship due to their aerial speed, their broad wingspan ensures grace and maneuverability. On land during breeding season, the males inflate their bright-red throat pouches to seduce the females: the brighter the red the more desirable they are for mating females. With two main species known as the Magnificent and Great, they are thought to be genetically distinct from those on the mainland.

The family-owned Ecoventura is widely recognized as a green pioneer in the industry with its 20-passenger yachts, the M/Y Letty, Eric, and Flamingo. Based in Guayaquil, Ecuador, they offer seven-night and 14-night itineraries with an inclusive price covering meals and snacks, non-alcoholic beverages, wine and beer served during dinner, guides, and excursions. Snorkel gear, wet suits, and sea kayaks are also provided on a complimentary basis. With the smallest guide-to-passenger ratio in the Galapagos, group size is capped at ten passengers per guide whereas the average is 16 per guide on most vessels.