The sun was just beginning to set as the Viking Spirit pulled into the tiny town of Durnstein, our final stop on the Danube before arriving in Vienna.
May 14, 2010 9:26 AM By: Jack Souther 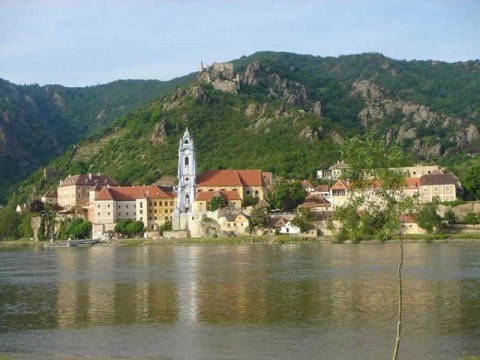 The sun was just beginning to set as the Viking Spirit pulled into the tiny town of Durnstein, our final stop on the Danube before arriving in Vienna. The cluster of meticulously preserved 16 th century buildings and the crumbling remnants of a medieval castle perched high above the town look much like those in a dozen other picturesque towns along Wachau Valley. But Durnstein holds a special place in the history of both Austria and England.

Back in 1189 Richard the Lionhearted trucked off to the Holy Lands to do what British kings did in those days. He fought valiantly during the Third Crusade but made the mistake of insulting Leopold V, Duke of Austria, a man not given to forgive such slights. Richard's second mistake was trying to sneak back to England through Leopold's territory. Despite his disguise as a peasant farmer Richard was apprehended, tossed into the dungeon of Durnstein Castle and held for a whopping ransom. It cost the Brits 35,000 kg of silver to get their king back, a sum so large that much of the country's ecclesiastical treasure had to be melted down to make the payment. The ransom funded, among other things, the building of Vienna's defensive wall and the ruined castle where Richard the Lionhearted was held prisoner continues to draw tourists and their dollars to the town of Durnstein.

We pulled out of Durnstein early the next morning and a few kilometres downstream passed the town of Krems, an ancient wine- and salt-trading centre which, during the Middle Ages, was even more important than Vienna. Here the picturesque Wachau Valley ends. Its steeply terraced vineyards and rocky headlands give way to low banks covered with willow and scrub alder as the Danube spreads out behind the Altenworth hydroelectric dam. But beyond the dam the country is a pleasant mix of farms, vineyards and low, forested hills. This is the region that inspired Johann Strauss to compose Tales of the Vienna Woods and The Blue Danube Waltz. The very name "Vienna" conjures up romantic images of gentlemen in powdered wigs and elaborately gowned ladies twirling across marble dance floors to the music of Strauss and Mozart. But as it approaches Vienna the Danube is neither blue nor particularly romantic.

Ever since the Romans established the outpost of Vindobona at the crossing where Vienna now stands the town has had a love/hate relationship with the river. Located at a natural intersection between east-west and north-south trade routes Vindobona prospered, grew into the town of Wenia and finally into the city of Vienna. But until it was finally tamed in the mid 19 th century the Danube was a maze of sandbars and shifting channels that changed course after every flood, creating havoc in the city. Work to mitigate the flood problem began in 1868. Ten years later the Danube was confined to a broad, artificial channel that slices through Vienna as straight as an arrow and bears no resemblance to the romantic river celebrated in Strauss's famous waltz. In the 1970s a parallel channel, the Neue Donau, was dug to provide further flood protection. Today a man-made sliver of land known as the Donauinsel separates the two waterways. Stretching for 20 kilometres like the median of a watery freeway the Donauinsel has become one of modern Vienna's most cherished amenities - a rare open space where people come to bike, skate, picnic and bathe.

A flock of white swans looking for handouts surrounds our boat as she slips into her berth near the western end of Reichsbruke Bridge. In a sense Reichsbruke is a bridge that spans both space and time. On the east it leads across the man-made Donauinsel Island and Neue Donau canal into UNO city, Vienna's International Centre, where high-speed commuter trains glide on elevated ramps past towering glass and steel office buildings. On the west it connects to Prater Strasse and the maze of winding streets in the Inner Stadt of old Vienna where horse-drawn flakers line up in front of the Imperial Palace just as they did in Mozart's day. Vienna is a city that has successfully embraced the future without losing touch with its past. And Emperor Franz Joseph 1, who came to the throne at the tender age of 18, can take much of the credit.

At Christmas 1857 Franz Joseph decreed that the city's fortified wall was to be torn down and replaced by a broad boulevard, the Ringstrasse. For centuries the wall had protected Vienna from foreign invaders but it also stifled growth. By the time Franz Joseph became Emperor in 1848 the wall had become a virtual prison for the citizens of Vienna and the inner city was crowded to the breaking point. It took 26 years to complete the initial Ring Road but as soon as the walls came down the city was transformed and revitalized. Known as the "Ringstrassen era" the decades from 1860 to 1900 saw the construction of magnificent buildings along the new boulevard and, true to Franz Joseph's original vision, the architecture is symbolic of the past. The meticulously crafted new buildings along the Ringstrasse blend seamlessly with those built centuries earlier within the old city walls and today the Ringstrasse and Inner Stadt are a living museum of architecture and the cultural heart of modern Vienna.

Before setting out to explore the old city we paused on Reichsbruke Bridge to admire the elaborate façade of Franz von Assisi church, which was built in 1898 to celebrate Franz Joseph's 50 th anniversary on the throne. From the bridge we found our way to Prater Strasse, followed it across the Doaukanal and spent the rest of the day rambling through the narrow winding streets of the Inner Stadt and along the broad, park-lined Ringstrasse. The old town includes classic examples of everything from baroque to renaissance and Romanesque to neo-gothic but you don't need to be an architecture buff to appreciate the artistry and craftsmanship of the buildings. From the majestic spires and ornate interior of St. Stephan's Cathedral to the sprawling Hofburg with its elaborate statuary, old Vienna is a feast for the eyes. And when you're tired of looking, a traditional Kaffeehaus is never far away.

After hours of walking we popped in to Café Demel near the Hofburg and ordered a coffee and strudel. "What kind of coffee" the waiter asked and pointed to a menu with about 30 different choices. In Austria the cult of coffee drinking has evolved into a complex ritual with its own language. We picked a name at random, a Flaker I believe, and were served a cup of strong brew laced with rum and smothered in whipped cream. The strudel was pretty good too. And as we headed out to the Opera House for an evening of Mozart and Strauss music we were already planning a return visit to Vienna.