Cleaning up after the USSR

The evening before we left Kiev I took a glass of wine up to the top deck of the Lomonosov and waited for the sun to set.
Sep 17, 2010 9:44 AM By: Jack Souther 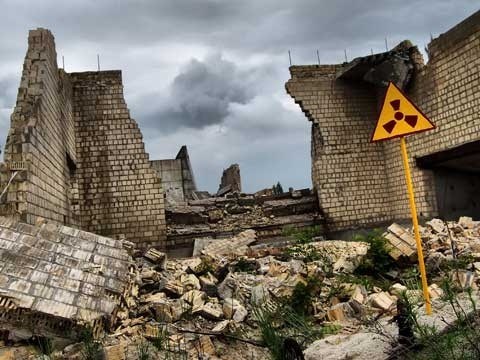 The evening before we left Kiev I took a glass of wine up to the top deck of the Lomonosov and waited for the sun to set. On the masthead above me the Ukrainian flag fluttered and snapped in a brisk north wind and as I watched the lights of the surrounding apartments blink on I wondered how different this city of three million people might look today if the wind had been from the north 24 years ago when Chernobyl's reactor number four, a mere 100 km upstream, blew its top.

On Friday, April 26, 1986 an experiment at the Chernobyl nuclear power station went terribly wrong and before it could be corrected the core of reactor number four was spiraling into an uncontrolled meltdown. The ensuing explosion and fire resulted in the worst nuclear accident of all time. But, in a travesty of lies and denials, Soviet officials did not even acknowledge it until three days later. Even then the risks were played down, resulting in the exposure of hundreds of unsuspecting people to lethal doses of radiation.

In the end it was the Swedes, a thousand kilometres to the northwest, who detected abnormal levels of radiation and sounded the alarm. Although Kiev was initially spared, a switch in the wind and fallout into the river eventually carried radioactive silt into its water supply. No one will ever know how many lives were lost or ruined by the accident or how many of those still unborn will suffer from insidious radiation damage to their genes.

The Chernobyl nuclear disaster was a pivotal event in the history of Europe. For Ukraine it triggered a resurgence of the nationalist movement that led directly to independence, and for the Soviets it was the final nail in the coffin of the USSR.

When Ukraine, after 69 years as a Soviet republic, set off on the road to independence in 1991 it inherited a staggering burden of legacies, some good, many bad, from the previous centralized regime. And during our two-week trip down the Dnieper into the Black Sea we got a first hand account of the Soviet years as seen through the lens of Ukrainian nationalism.

A few kilometres south of Kiev, the Dnieper flows into a reservoir behind the first of five hydroelectric dams that were built during the USSR's program of industrialization. When it was completed in 1932 the Dniproges dam at Zaporizhye was the largest of its kind in the world. Provided with access to deep-draft freight boats on the reservoirs and an abundance of cheap electrical power from the dam the tiny settlement of Aleksandrovsk grew into the city of Zaporizhye, one of the largest industrial complexes in Ukraine. But there was also a down side to the taming of the Dnieper.

The sprawling reservoirs behind the dams cover two per cent of Ukraine's total area and the loss of prime agricultural land put an added strain on the country's farmers who were already reeling under the burden of Stalin's collectivization program. According to common wisdom the dams themselves were built with slave labour, both prisoners of war and farmers displaced from their confiscated land and forced to work on state sponsored construction projects.

The huge state-run communes failed to produce enough food and in 1932, the same year that the Dniproges dam was completed, the country was swept by famine. Historians estimate that seven to 10 million people died of starvation in the USSR during the "Great Hunger" of 1932, and of all the republics Ukraine suffered the most. According to Henry, one of the ships lecturers, Ukrainian agriculture has never fully recovered from Soviet collectivization and, he adds, "It wasn't just the farms that suffered. The fishing industry and the river itself were virtually destroyed by pollution from Soviet heavy industry and runoff from excessive use of fertilizers. But," he adds optimistically, "things are getting better."

The air was thick with smog as we cruised past the seemingly endless succession of factories lining the industrial waterfront below the Dniproges dam and I wondered what life must be like for the workers living in nearby apartment blocks. "It used to be worse," Henry told me, "many of the factories are now shut down. The air is better and the river is also recovering. The fish are coming back."

The next day as we pulled into Fishermen's Island on the river's delta an old man fishing from the dock had a couple of small fish that proved Henry's point. We spent the day exploring the backwater channels of the delta in a small skiff - admiring the tiny well-kept dachas (cottages) where affluent apartment dwellers come to seek relief from the city. At one of the small villages we paused to take in a craft fair and talk to some of the locals. A woman who spoke a little English invited us into her garden and as we talked I got the impression that things are indeed "getting better." Ukraine may be poor but its people are enjoying a freedom they never had when their country was a Republic of the USSR.

It was late evening by the time we climbed back aboard the Lomonosov and steamed out of the river into the Black Sea. A pair of dolphins joined us and spent half an hour cavorting in the ship's bow-wave before looping off into the distance. "They look happy and well fed," observed Henry as he joined me on the top deck. "A few years ago it looked as though the entire Black Sea ecosystem was going to collapse. Over fishing and pollution back in the '80s killed just about everything," he explained, "and Mnemiopsis finished off most of what was left."

Mnemiopsis, an alien jellyfish-like creature with no known predators, took off in a devastating biological explosion that nearly wiped out the weakened natural ecosystem. No one knew how to control it but, after eating the Black Sea almost bare, the invaders began to die and the native species are slowly returning.

The recovery of the Black Sea and its rivers is as much due to chance as it is to good planning. Following the Soviet collapse in 1991 fertilizer became too expensive for most farmers to buy and many factories were shut down by the economic recession, resulting in a sharp decline in pollutants entering the river. But, according to everyone we spoke to, Ukraine is also actively trying to reverse the damage. The reckless use of fertilizer has stopped, an effort is being made to limit pollution from the remaining factories and the commercial fishery is now regulated. And on Dec. 15, 2000 the last of the aging Soviet-built nuclear reactors at Chernobyl was finally shut down.

Lingering repercussions from the Great Hunger of 1932, the Chernobyl explosion of 1986, and the Mnemiopsis disaster of 1989 are part of the legacy that Ukraine inherited from the USSR.

"It's going to take a while to undo the damage," says Henry, "but we're working on it." And then adds optimistically, "Things in Ukraine are getting better every day."