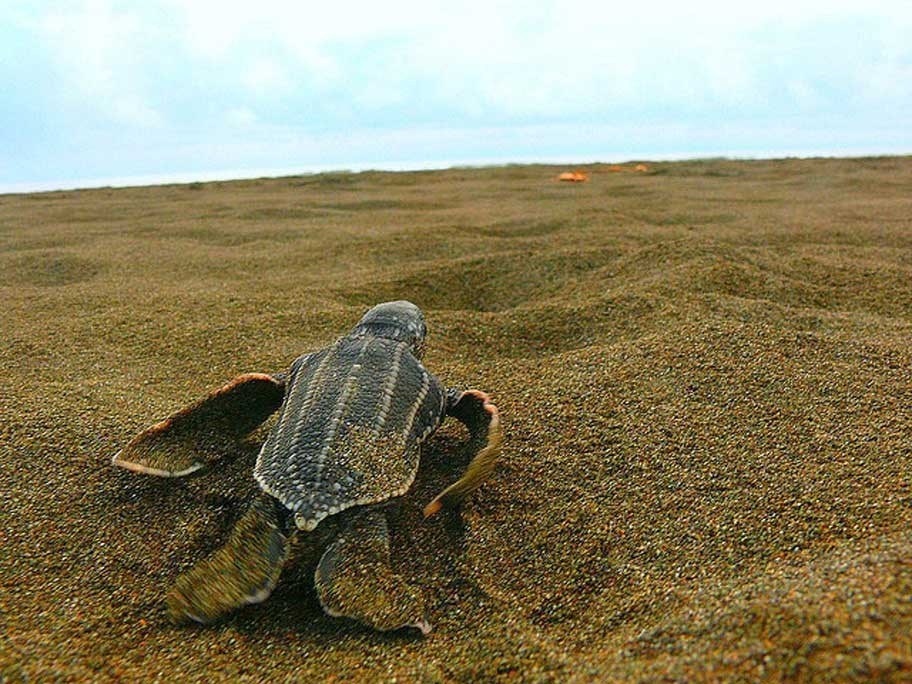 A lone leatherback finds its way to sea; photo by Juanma Carrillo, flikr.com .

Gandoca, Costa Rica. To avoid walking in wet gear all night, we were told to strip down to our underwear to wade across the deep, dark river flowing to the ocean. I gingerly step into the water as the red eyes of caimans gleam in the beam of my flashlight. My heart stops pounding in my ears once we cross without mishap and we continue trudging diligently through the soft sand, straining with each step. A storm approaches and during a rest break, I feel the first heavy drops of rain on my head and the wind begins to howl. This is beginning to feel like a rather futile effort, I think to myself, disheartened.

But then I see it.

Heading to the sea in a shuffling motion, the creature is illuminated by random flashes of lightning, like an eerie monster emerging from the depths of my weary brain. Yet this is, in fact, a leatherback sea turtle, intent on reaching the sea after laying her eggs. Now it was our turn to protect the legacy she had left behind.

Gandoca Beach — on Costa Rica's Caribbean coast, near the Panama border and the frontier town of Sixaola —is a remote 10-kilometre sandy strip, well off the beaten tourist track, where travellers, biologists and locals converge to work in unity to help the leatherback. Renowned as the world's largest sea turtles, leatherbacks can reach up to two-and-a-half metres in length and weigh as much as a small car, and despite travelling up to 5,800 kilometres in search of food, females return to the same nesting beach each year.

An endangered species, these sea turtles are in decline worldwide due to illegal hunting for their meat, over-harvesting of eggs, accidental capture in commercial fishing nets and the development of nesting sites. To complicate matters, scores of turtles die from eating plastic products they mistake for jellyfish — like the bags used by local banana plantations, which continuously get washed out to sea via the Sixaola River.

The poaching of leatherback eggs began spiralling out of control in the early 1980s. In this particular region of Costa Rica, this was largely a result of the re-emergence of the banana companies and the improved road system. Poverty and this new access to the coast drove more and more desperate people to harvest eggs, which were eventually sold to restaurants in larger cities. In 1985 the Association ANAI, a non-profit organization, stepped in and was instrumental in creating the 10,000-hectare Gandoca-Manzanillo Wildlife Refuge, and subsequently the sea turtle conservation project. With the aid of thousands of volunteers and partnerships with international environmental groups, over the past 20 years the project has experienced a dramatic achievement — it is one of the few sites to see an increase in nesting activity.

The aim of the program is to conserve the nesting leatherback colonies through a collaborative process that also contributes to an improvement in the quality of human life. Since its inception, the research volunteers, with the help of local residents, have decreased the poaching rate within the Gandoca-Manzanillo Wildlife Refuge by more than 90 per cent, while increasing the families' income by more than 300 per cent through eco-tourism.

For many young travellers today, the inherent desire to contribute and make a difference in the countries they visit inspires them to volunteer on projects such as this. Elizabeth Cotter, 20, grew up in Squamish and spent two weeks in Gandoca in April 2010. For her, the combination of working up close and personal with the turtles and the connections made with the other volunteers and locals was unforgettable.

"It is something that will stay with me forever," she says, adding that volunteering whilst travelling is something she'd love to do as a repeat performance.

Cotter and other volunteers walked the beach at night during a four-hour shift. When a turtle was located, a flurry of activity ensued as critical data is accrued – measuring and tagging of the turtles, egg collection and their relocation to the project hatchery. The buried eggs at the hatchery were then monitored 24-hours a day until the release of the baby turtles after the incubation period. It is estimated that only one or two in every 1,000-baby turtles survive to maturity.

It's no wonder that groups like ANAI have focused so much attention on this side of the conservation effort. The Caribbean adult leatherback population currently hovers around only 25,000 individuals and thus every egg counts.

Notwithstanding the hardships of little or no electricity or running water, little sleep, the extreme heat and relentless sand flies, this unique conservation project continues to attract international volunteers in droves. And the leatherback sea turtles need all the help they can get. The alternative is inconceivable — seeing these turtles disappear forever, gone as suddenly as the turtle caught by that flash of lightning on my first night in Gandoca.