At Vienna's Sudbahnhof station, I caught the 7:58 a.m. train to Graz and, via Maribor in eastern Slovenia, to Zagreb, Croatia. From flat Austrian farmland the train ascended into the mountainous southeast.
Jan 18, 2008 8:48 AM By: Alison Appelbe 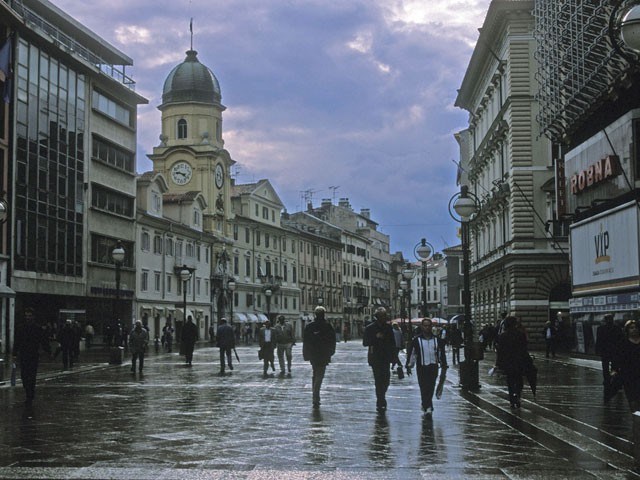 Street in port of Rijeka

At Vienna's Sudbahnhof station, I caught the 7:58 a.m. train to Graz and, via Maribor in eastern Slovenia, to Zagreb, Croatia.

From flat Austrian farmland the train ascended into the mountainous southeast. We skirted hillsides dotted with whitewashed houses and traversed a series of tunnels and forests. Now and again, a bulbous church steeple, reminiscent of Turkish incursions more than three centuries ago, rose in the distance.

Increasingly, the railway stations were of rough-hewn stone. At Murzzuschlag, we began descending — swirling it seemed — toward the Mediterranean. Spielfeld was the final Austrian station; the train passed into Slovenia.

We traversed a farmscape of corn, grapes, vegetables and cone-shaped hayricks. "An old-world Eden," I wrote in my notebook as the train slid along a slow-moving river. We stopped at Celje, an important city in medieval times. Then the river widened and Slovenia became dustier and more industrial.

A trailer marked "Policija," and flying the blue-and-red Croatian flag, signaled the Slovenia-Croatia border. A half-hour later we were in Zagreb.

The Croatian Railway ("Hrvatske Zeljeznic" in Croatian, with a stylized " hz " logo) offers first and second-class service from Zagreb to Split. So after several days in wonderful Zagreb, I made my way to the city’s imposing 19 th -century railway station.

It was 6 a.m. and bleary eyed, I couldn't figure out which rail cars would travel all the way south, and which would (I’d been warned) be uncoupled along the route. An elderly man led me to a car marked "Split."

The train departed with a delightful rendering of “Auld Lang Syne” over the loudspeakers, then wended along a broad river with a series of small rapids. I bought a long, chocolately coffee from a train attendant.

Most of the railway stations along this stretch were temporary huts or simple buildings of wood and stone. At every station, including those that the train rumbled right through, a local trainman waved a red flag.

At Ogulin junction, the train split in two, with some cars heading west to the port of Rijeka. From Rijeka, trains travel into western Slovenia; long-distance buses head into the touristy Istrian peninsula and Italy; and ferries sail down the Dalmatian coast.

I shared a train compartment with a middle-aged woman who spoke as much English as I did Serbo-Croatian. But with the help of a map, she explained that she lived on the island of Solta, just off Split. She shared her bag of peanuts with me, and together we tolerated (barely, for my part) the Euro-pop music that blasted through the car.

We passed buildings still showing signs of damage from the Yugoslav War that ended in 1995. Now and again an elderly man or woman could be seen cycling or leading a donkey along a road. Occasionally we saw a small logging operation. Flocks of sheep, invariably led by a shepherd, appeared on the hillsides.

By mid-morning, we were in the Sibenik-Knin region. As we passed yet another bullet-pocked station, my car-mate mimicked a machine-gun (to ensure I understood). We crossed a stone railway bridge and pulled into Knin. In 1995, when Croatia retook the region, most Serbs fled this former Serbian state capital to the more easterly Balkans.

Croatia is shaped like a backward 7, sandwiched between the Adriatic Sea and the rest of the Balkans. The Dinaric Alps provide its rocky spine and spectacular landscapes. One is the world-famous Plitvice Lake National Park, with a series of 16 lakes linked by waterfalls. Travelers to Plitvice, with camping sites and hotels, can change trains at Knin (or travel through from Zagreb).

From Knin, a local train travels west to the city of Sibenik, on the Dalmatian coast. But we continued southward to Drnis through a region of rough rock, known as "the karst." The train sped past rock-wall enclosures of tough-looking vines, heavy with grapes. Then the glistening Adriatic and lush-looking islands — among them Solta, Brac, Hvar, Korcula and Vis — each a tourist destination in its own right, came into view.

The train dropped down to a broad bay lined with villages, collectively called Kastel Stari. The most celebrated among them is Trogir, a tiny gem of an ancient city. At 1:25 p.m., we pulled into the jewel in the region's crown, the city of Split.

Over the centuries, the city of Split has encrusted itself onto the remains of a sprawling palace built by the Roman Emperor Diocletian around 300 A.D. Today this odd metropolis is a major tourist destination. During my visit, the old city, filled with Roman artifacts, shops and outdoor cafes, was chock-a-block with tourists.

Croatian trains travel no further than Split. The only public transportation to Dubrovnik, 235 kilometres to the south, is bus or ferry. (The major Jadrolinija ferry line makes regular trips between Dubrovnik, Split and Rijeka, and the larger islands.)

So I went by bus to Dubrovnik, which, like both Split and Trogir, is a UNESCO World Heritage Site. The inner city is blessed with churches and monasteries filled with Renaissance art and museums like the one built right into the medieval wall and devoted to the former republic's maritime history. Outdoor and terrace restaurants serve, perhaps, cuttlefish risotto and a ubiquitous white cheese made on the island of Pag.

From Dubrovnik, I sailed back north on a Jadrolinija ferry. In the warm autumn, passengers sat on the decks, wine or beer in hand. After dark, back-packers nestled into their sleeping bags in an interior lounge. I shared a four-bunk cabin with an Austrian woman returning home from a visit with her married daughter. In the morning we arrived in Rijeka.

The "Croatia Express" left Rijeka at 12:50 p.m. for the Slovenian capital of Ljubljana, continuing on to Munich. Changing trains at Ljubljana, I lost a bundle of cash from an unzipped pouch. From Ljubljana, the train passed through Jesenice, near the Slovenian border. As night fell we were back in Austria.