Grading the Great Wall of China

In my view, walls are seldom great. They’re actually pretty boring, more useful than awesome.
Nov 28, 2008 5:47 AM By: Paul Carlucci 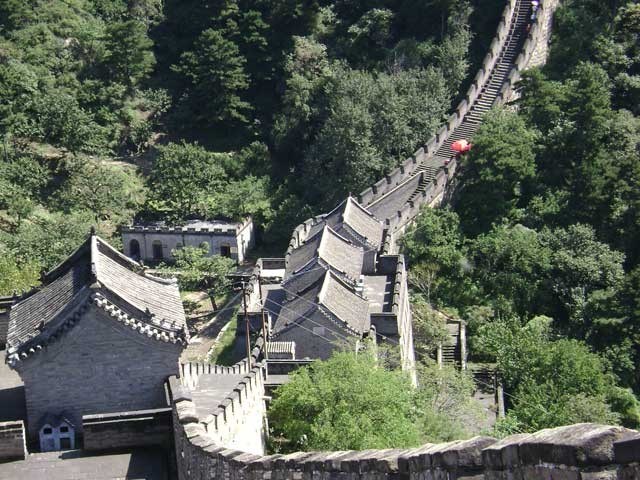 In my view, walls are seldom great. They’re actually pretty boring, more useful than awesome. Sometimes, you can hang cool stuff on walls, but then it’s more like a great Van Gogh or Bela Lugosi portrait, and the wall is actually a vehicle for greatness, sort of like an English chauffeur who won’t buy CDs and listens to Anthrax tapes in his Lincoln while taking you to an awards ceremony with midgets and dragons and there’s a staircase made of ice that ascends to heaven, where everyone sings “O Fortuna” while watching American Psycho , and there’s always sushi and no such thing as politics or, paradoxically, religion. That would be a great ceremony, and an even greater heaven. You’d have to tip the driver with more than a smile and some blasé cool because, after all, he got you there. Thanks, dude. Go buy yourself something nice.

You don’t have to tip anyone in China. Which seems weird. Like, here you come, all North American with suddenly enormous spending power, luggage hanging off your fattened frame and Blackberries and watches and knee-jerk apologies that stand in utter opposition to how you really feel, just buying beer for two cents and food for three and whatever else you want for no more than $10, and you don’t even drop a tip. Not once. You just callously plunge your soiled body into the pool of another culture. And then you splash around a bit.

You can make mad waves on the Great Wall, tell you what. First off, you could hang a Van Gogh on the thing and it would only be mildly interesting. Like, go chop your ear off, buddy — you tire me. Why? Because I’m standing on something that’s longer than Canada. How about that? And it’s older than Canada, too, but that’s no big deal. So was Van Gogh and his ear on that fateful December day, when he got to thinking, “You know what? I think I love this chick. Yeah, I do. I’m cutting off my ear to prove it. Maybe she’ll make it into a pretty broach and we can go be lugubrious under some stars together.”

I guess my point is that The Great Wall is pretty hardcore great. Greater still is exploring it with Jim Barnum and Paul Morgan. They’re great dudes, fantastic even. Indeed, we’ll get there — but first, a little history lesson.

The whole thing started 700 years before Jesus was even a glint in the big guy’s eye. It was a dynastic time, code for patriarchal types roaming around in violent conflict. There were seven of these types, all powerful, and so they built walls here and there to better fight for supremacy. Along came Emperor Qin with cool hair and robes, and he swallowed up those states like most people drink water. Refreshed from victory but concerned over the southerly expansion of the Huns, Qin had ordered all those walls connected.

Tough luck, dude. The Huns thought the wall none too great, and they were so successful with their invasions that the subsequent Han dynasty traded them brides for peace, losing the women, sure, but not the conflict. After years of war and Great additions, the Hans finally subdued the Huns.

It goes on like that. Along comes a dynasty, and, with it, some work on the Wall. By the time we get to about 1650, it’s finally done. Today, because it’s so old and has bore witness to much battle and only a little less disaster, it’s haggard and crumbling here and there. So people are forever fixing it. Greatness, it seems, is high maintenance, almost like girlfriends with rich parents and no ambition — minus, of course, all the excellence we’ve been talking about.

Morgan, Barnum and, sometimes, myself: we three are greatness atop greatness. We mount the wall at Mutianyu, the section outside Beijing, which is about 2.25 km long. It ambles past copper-coloured cliffs and across mellow ridges, and has, in some form or another, since about 550, when the Northern Qi Dynasty built it. About a thousand years after that, the Ming Dynasty spruced it up, lest the capital be damned, which it frequently was.

Wandering from watch tower to watch tower, occasionally privy to a praying mantis or some disgusting centipede type thing, often heckled by beer mongers while the sun savages our every skin cell, it dawns on us that skateboarding might be a little cooler. We don’t expect to gap the whole Wall, no, not like some people who drop out of helicopters to achieve such greatness. Rather, we just want to goof around. Luckily, Barnum brought his board. He starts doing ridiculous things to the fanfare of tourists and merchants alike. If you think that’s disrespectful, then you should probably stop being so bloody reverential. After all, life’s too full of hilarity to be getting that kind of offended. Exhibit A would be the high speed, one-man sled track running from the top of the Wall all the way down.

At this point, including the headlines, I’ve used the word “great” just about 20 times in this article. Perhaps, as with criminality, simply employing the word over and over again makes this a great piece. But perhaps not. Besides, it’s the Great Wall we’re talking about, not my flagging sense of integrity.

So, in summation, the Great Wall is great for a number of reasons. Its vintage, surely, and so too its scope, which is enormous — longer than an entire continent. The vision behind that is pretty colossal. Just consider the walls in your house, nothing but wood, insulation, wiring and Gyprock. There’s no greatness therein, only banality. But its true credentials are maybe a bit more abstract, a bit more interpretive. To wit: the Great Wall is so boss because it’s this ancient piece of history, something scaled over and trod upon by countless people over thousands of years, all manner of nobility and bloodshed long soaked into its stones. In a way, it’s a monument to the story of man. And you can buy beer up there. And skate. That, ladies and gentlemen, is the confluence of greatness.