Guanajuato: a Mexican City's tale of revolution, silver mining and some accidental mummies

Frozen in their final, ghoulish postures they stared, unseeing from behind glass cases.
Apr 8, 2011 9:08 AM By: Alison Lapshinoff 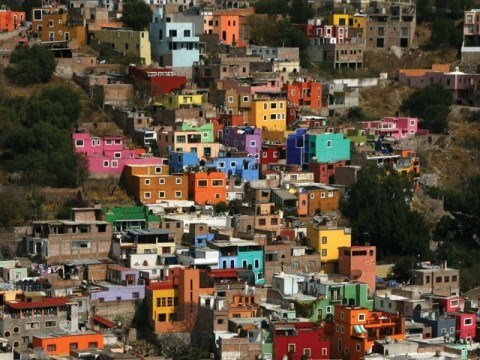 Frozen in their final, ghoulish postures they stared, unseeing from behind glass cases. Some seemed to rest peacefully, oblivious to the rude interruption of their interment; others wore expressions of pure horror and despair, aghast at being placed in public view in such a state. They were old and young; clad in various stages of dress, some in full suits or dresses, others nothing at all. They should have been underground but a local law changed their eternal fate, placing them here, in Guanajuato's mummy museum, the final resting place for those who could not afford to pay their taxes.

I stepped off the bus into the bowels of the small Mexican city. The tunnel's darkness was punctuated by weak light pouring in from a small staircase heading up into the day. I ascended. Blinking in the bright, Mexican sunlight, I found myself standing in a leafy plaza bustling with activity. Young folks loitered peaceably on decorative wrought iron benches beneath impeccably manicured trees while the cobblestone, pedestrian-only walkways wound their way around the colourful, colonial architecture.

Guanajuato is, perhaps, not your typical Mexican city. Wedged neatly in a narrow valley in the heart of the country, the place has an air of colourful prosperity, its vibrancy stemming from a lively student population. Indeed, one needs a certain degree of energy to navigate the steep, winding alleys that whimsically navigate their way around the hodgepodge of colourful, sandstone buildings climbing the hillsides surrounding the heart of the city.  Conspicuously absent from the scene is the dull roar of traffic to which we have become so accustomed, the bulk of it having been diverted underground to the labyrinth of tunnels beneath.

Historically, the city's wealth has been extracted from the surrounding mountains where a plethora of silver and gold was discovered in the 16th century, a find that the colonizing Spaniards were quick to exploit, sending soldiers to set up forts in the area. Indeed, the Valenciana Mine fast became one of the richest producers of silver in history, accounting for 60 per cent of global production by the 18th century, making Guanajuato one of the richest cities in New Spain.  But as is often the case, as the rich got richer, malcontent was stirring among the commoners, and a revolution was in the works.

On the morning of September 16, 1810, in the neighbouring city of Dolores Hidalgo, Father Miguel Hidalgo y Costilla rang the church bells, gathered his congregation and made his famous speech that began the revolt against the Spanish colonial government, thus beginning the Mexican War of Independence. Four days later, he and his small army of criollos, or lower class, locally born Spanish marched into Guanajuato and took their stand against the elite who cowered in the Alhondigas de Granaditas, a granary with few windows and thick walls. Gunfire kept the insurgents at bay.

"Death to bad government," was the battle cry as a poor miner who came to be known as El Pipila heroically strapped a flat stone to his back to ward of gunfire and crawled to the door of the granary. Smearing the door with tar, he set it ablaze allowing the insurgents to enter and take the building, beginning their first battle with Spanish troops, the Siege of Alhondiga.

Although Mexican independence from Spain was not officially declared for another 10 years hence, September 16 became the national holiday, Independence Day, marking the beginning of the rebellion against the colonizers and the start of the war that facilitated Mexico's independence.

Today, much of the city's wealth comes in the form of tourist dollars, which brings us back to the ghoulish fate of the unlikely mummies on display at the museum. Guanajuato may be well off but this is still Mexico and the bus a rickety old beast that ground its way up the steep hills from the well kept 'Centro Historico' to the outer suburbs, where evidence of the poverty one expects of the country quickly becomes apparent. Up close, homes are spartan, concrete and brick affairs crumbling quietly in the hot Mexican sun. Simple shops and yards overgrown with cacti flank the winding road. Laundry hangs to dry in the light breeze. Beyond, the city is spread out like a colourful afghan over the dry hills. Before long, Guanajuato's Museo de las Momias came into view.

Consider, if you will, the possibility that a wealthy cadaver may covet your final resting place, prime earthen real estate where you thought you might lay unmolested for eternity. In 1865, a local law was passed requiring the payment of a 'grave tax' in order that the dead may lay undisturbed in the local cemetery. Now consider the possibility that your living kin could not afford to pay! In June of that year, the gravediggers of Guanajuato made their move; taxes hadn't been paid and bodies were slated for removal. There were rich folks to be buried!

Guanajuato's Museo de las Momias displays over 100 well preserved mummies frozen in their gruesome final postures. Scientists can only speculate as to why the bodies mummified instead of decomposing as one might expect; perhaps a combination of the soil conditions and the dry climate. Some may find the museum to be a grisly display mocking the fate of these unfortunate, tax-evading corpses, but the income it generates certainly helps to keep Guanajuato's living citizens existing in the manner of which they are accustomed.  Tourists armed with cameras and morbid curiosity see to it that the Mummy Museum remains an important generator of revenue for the city.

As the bus strained its way back down the steep, winding hills to the leafy 'Centro Historico', the living got on with their day in Guanajuato.

Vendors peddled cups of colourful, fresh fruit, weathered old men manned their shoeshine carts and at the market, all manner of produce was piled high.  Fresh meat was draped carelessly over the market tables with no consideration for refrigeration.

Even chicken feet were on offer! As I stepped off the bus it once again plunged into the darkness of the city's underbelly. The main street runs for three kilometres underground following the original course of the Guanajuato River. Flooding that nearly wiped out the city in the 1700's prompted the diversion of the river. Ditches and tunnels were built to divert the water from the prosperous young city that was sprouting from the narrow valley.  Today, the dry riverbed accommodates the bulk of the noisy traffic that would otherwise disturb the tranquil, pedestrian setting above ground.

As night falls, the main plaza comes to life with a live band playing among the leafy trees and ornate fountains. Older couples dance beneath the dense canopy of leaves and students linger on the many dozens of wrought iron benches. Restaurant patios flicker with candlelight as tourists and locals alike sip wine and watch the world go by, the Mexican evening enveloping them like a warm blanket. Above, the timeless buildings keep a careful watch over the crowds that still ply the winding cobblestone walkways. Any traces of poverty have retired for the evening. It is a unique city of great vitality, of the living and the dead, of great riches discovered and ornate colonial architecture. But despite its timelessness and wealth, a bright patch of colonial conquest nestled in the parched brown hills blanketing central Mexico; Guanajuato is, at its heart, a city of revolution.