The euphemistically-named Ginger Blossom Lane cuts through a great swath of crusty, black hillside sparsely dotted with tired looking homes. There are no ginger blossoms.
Mar 18, 2011 5:43 AM By: Alison Lapshinoff 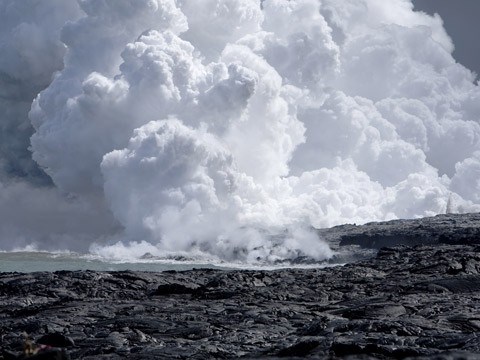 The euphemistically-named Ginger Blossom Lane cuts through a great swath of crusty, black hillside sparsely dotted with tired looking homes. There are no ginger blossoms. Marginal plant life tenaciously clings to the bleak landscape but the most prominent feature of HOVE, or Hawaiian Ocean View Estates, is bristling piles of rough, ebony-coloured stone. Looking west, one can just make out the line of the sparkling Pacific, for the 11,000 acre development is just close enough to claim ocean view status but not close enough to see it dance.

Dreaming of a warmer clime? Cheap real estate? Land on a tropical isle where the standard of living is high and the water is good to drink? Hawaii has more facets to her personality than many take the time to discover. And if one opts to live in the shadow of an active volcano, life in paradise can be very cheap indeed!

It all began some 70 million years ago on the floor of the Pacific when a rupture beneath the earth's crust allowed liquid magma to burst through the Pacific plate. The lava hardened and gradually grew as more sub-oceanic eruptions piled lava on lava, forming a mound, an undersea mountain and, finally, an island. There was no life at first for fresh, hardened lava is inhospitable stuff. But plants are tenacious beings, and as seeds were carried in on the wind and in the bellies of birds, life did take hold on these islands.  Coral reefs formed. Birds began to take refuge in what slowly became a tropical oasis rising unexpectedly from a vast Pacific. And finally, sometime in the middle part of the first millennium, humans arrived.

Just as violent, undersea eruptions formed the Hawaiian islands, the elements endeavour to take them away. Indeed, some of the oldest islands, like Kaua'i and Ni'ihau, are in their death throes, as their volcanoes died some 1 million years ago. As the mighty sea pounds at their beaches gradually breaking down ancient, volcanic stone into fine sand and finally carrying it away, rivers carve their way through lush and eroded rainforest, slowly carrying the very soil that forms the islands back to the sea from which they came. In time, great, unimaginable stretches of time, they will disappear completely.

Maui and Oahu could still be considered teenagers; no longer growing but still young. Maui's Haleakala last erupted sometime in the late 1700s. The island of Hawaii, informally known as The Big Island, however, is still experiencing the growing pains of a geological newborn. Born only one million years ago, The Big Island is still being actively created. Home of the aptly named Hawaii Volcanoes National Park, the island is made up of five major volcanoes, one of which, Kilauea, is thought to be the most productive on earth. She has, in fact, since the '80s, oozed from her flanks the equivalent of two million dump truck loads of fresh lava creating almost 600 acres of new coastline, burying about eight miles of state highway and destroying almost 200 homes. Evidently, the growth of an island comes at some cost!

The airport at Kailua-Kona on The Big Island's dry west side is an outdoorsy affair themed after a Hawaiian village. It is situated on a vast plain of black stone, lava that flowed from the Hualalai volcano in 1801. In fact, much of the island's west is barren and bleak, plant life not having had the time required to establish itself on the young flows of lava. Most of the island's rain gets dumped on the lush east side, leaving the west dry and slow to recuperate from continual volcanic assaults.

The road south from the airport heading toward Hawaii Volcanoes National Park where all the current volcanic action is taking place traverses a landscape that is at one moment, lush and green, the next barren and bleak. The volcanic stone that has blanketed much of the area is light, rough and porous, giving the impression of having the ability to tear to shreds anyone unlucky enough to fall upon it. Although parts of the coast boast the fine strips of sand dotted with palm trees that we all associate with Hawaii, just inland, the scenery is decidedly different. This is an island still in creation, her very being still bursting forth from the bowels of the earth. Although parts of the island resemble the tropical paradise we all expect of the place, the stereotype is oft interrupted by the all-consuming flows of lava rudely entombing nature's handiwork on its route to the sea.

The large southern part of The Big Island known as Ka'u has a chilled out, laid back personality all its own. It is a place where locals rule and mega resorts are definitely not welcome, despite the economic boost they may bring the place. The highway passes by many fallen corpses of lofty development dreams gone sour, which brings me back to the aforementioned HOVE, or Hawaiian Ocean View Estates.

Partially built on a lava flow that spilled from the Mauna Loa volcano in 1907, the massive subdivision was the brainchild of the Crawford Oil Company in the 1960s. About 11,000 one-acre lots climb the barren hillside, organized in a military, grid-like fashion. Roads are euphemistically named things like Lotus Blossom, Seabreeze and Paradise but the reality is somewhat different. A mere 3,500 hardy souls occupy this vast swath of optimistically subdivided land. Vacant lots with tired and permanent For Sale signs stuck awkwardly into the rugged piles of stone are a common feature. Parts of HOVE have no power, and water is by rain catchment only. Until 1998, telephone was by party line. Plant life is marginal to non existent and actual houses vary from large, pricey affairs tucked away in the more liveable corners where plant life has taken hold to 200 square foot shacks with no bathroom and nary a tree or bush for shade; just endless piles of inhospitable black stone.  Over 300 lots are currently listed for sale and even today, one can buy an acre of Hawaiian real estate for as little as $5,000. Tempted.....?