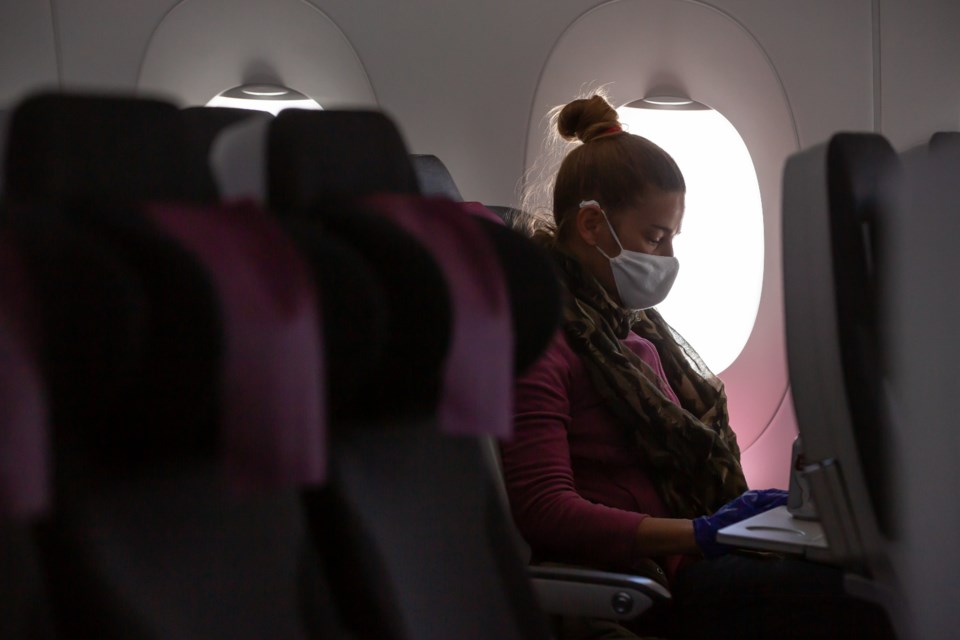 B.C. health officials are concerned about airlines’ plans to reduce physical distancing measures as of Wednesday, which could result in passengers sitting directly beside each other.

Health Minister Adrian Dix said he would like to hear from federal agencies to allay fears or explain why they have allowed Air Canada and WestJet to end the seat-distancing policies to prevent the spread of COVID-19.

“My expectation is to hear explicitly what position the federal government has with respect to physical distancing, and whether they agree with those decisions,” he said.

Provincial health officer Dr. Bonnie Henry said the airline in-flight distancing policy does not fall under her jurisdiction, but she assumes there is evidence to support the move. She said it’s “incredibly important” that passengers wear a mask while travelling, adding: “We also feel that physical distance is an important part of that as well.”

The carriers said Friday they will follow health recommendations from the United Nation’s aviation agency and the International Air Transport Association trade group.

Transport Canada said in a statement it issued guidance to the aviation industry, including recommendations for passenger spacing, but it is not mandatory.

“As physical distancing may not always be possible, all travellers, except those under the age of two years, and certain individuals with medical conditions, are required to wear a non-medical mask or face covering when travelling by air,” said the statement.

Air Canada could not be reached for comment Monday, but it has said it is offering flexible rebooking options to customers on flights that are close to capacity. It is also introducing additional touchless processes at airports.

WestJet also could not be reached for comment, but it has said its staff can help customers to move to another seat if there’s space to accommodate that.

Henry and Dix stressed the need for robust screening processes before allowing people to board an aircraft, saying it’s important that people not fly if they are ill.

“I can say that we’ve had occasions . . . in the past week where people have arrived with symptoms and have tested positive for COVID-19,” Henry said. “It is an environment where we need people to be honest when they’re answering the [screening] questions and we need to make sure that we can screen people out from arriving in Canada, in B.C., and other parts of this country with COVID-19.”

There are 153 active cases in the province, of whom 18 are in hospital, including five in intensive or critical care. No new deaths were announced on Monday.

Vancouver Island has one active case. The Island Health region has had 131 confirmed cases. Five deaths have been attributed to the illness.

There was a new exposure announced on the weekend related to people who were at Brandi’s Exotic Show Lounge on Hornby Street in downtown Vancouver. The Vancouver Coastal health authority is warning people who were there between 9 p.m. and 3 a.m. from June 21 to 24 or midnight to 3 a.m. on June 25 of possible exposure.

Three people who were there at that time have tested positive for COVID-19, Henry said.

Businesses need to be aware they are responsible for keeping employees and patrons safe, she said. “And you could be liable if appropriate precautions are not taken to protect people.”

Henry said the venue’s safety plan “was not adequate” and it has been temporarily closed.

“We have to realize these aren’t things we’re inventing to try and punish businesses or people — it’s to try to ensure we’re not letting this virus get out of control,” said Henry, citing similar establishments such as nightclubs in the United States and Europe where the virus has taken off.

There remain six active outbreaks in health care facilities in the province — five in long-term care and one in an acute-care facility. Dix said he and Henry will address the restrictions on visits to long-term care homes and hospitals today.

Many spouses and children of seniors in care homes, especially on Vancouver Island where there have been no outbreaks in care facilities, have complained about the lack of options to visit their loved ones.

— With a file from The Canadian Press