Travelling by tram the way to see Hong Kong Hong Kong's Kai Tak is the last word in airport modernity and its Airport Express train into town is a model of quiet, speedy efficiency.
Oct 24, 2012 9:00 PM By: Peter Neville-Hadley 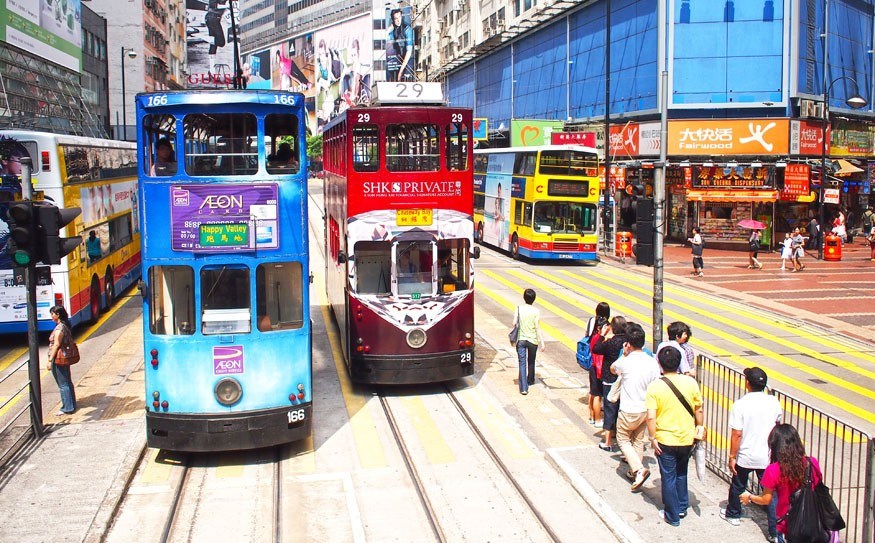 Travelling by tram the way to see Hong Kong

Hong Kong's Kai Tak is the last word in airport modernity and its Airport Express train into town is a model of quiet, speedy efficiency. The city's gleaming MTR subway system, with its air-conditioned carriages, is the envy of many another city.

But for the visitor the best way to get around Hong Kong Island is in a less rapid and less technologically advanced manner: by tram. The century-old system that snakes for 30 kilometres along the island's north side connects the big-name sights and glossy international shopping of Central to a host of lesser-known street markets and traditional Chinese businesses, and its trams rumble along slowly enough for passengers to take in all Hong Kong's immense bustle and variety.

The flat fare is HK$2 (about 25 cents), and this two-dollar tour is the best value for money in town.

You board the tram — a battered, double-deck metal canister with rounded ends — through a turnstile at the rear, and it's best to make your way up the narrow spiral staircase to the top deck, originally reserved for first-class passengers, for views over the traffic and for eye-level encounters with Hong Kong's large expanses of bilingual neon signage.

It really doesn't matter where you get on, or where your tram is headed, or if you spend a whole day riding the system from end to end. But, for example, the No. 5 eastbound from Central will take you past rows of familiar shopping and the dignified buildings of the colonial era, now dwarfed by the towers of global banking concerns.

There's no air-conditioning, but the windows are all open to let a cooling breeze waft down the tram as it moves along. There are stops on average every 250 metres, but the trams travel for the most part in their own dedicated lanes and have priority over other traffic when they don't, so while speed is modest, progress is more persistent than that of other traffic. If you see something of interest and want to get off, drop your HK$2 in the slot as you alight from the front of the tram.

You might, for instance, want to hop off to see the Suzy Wong-era nightlife of Wan Chai, still surviving along with many traditional buildings, or ride on a little further to see what's happening under the Canal Road Bridge. Here, in an old tradition rarely seen anywhere else, middle-aged ladies seated on tiny wooden or plastic stools sort out the problems of those who consult them by beating and burning papers representing their enemies.

Around Causeway Bay there's a warren of budget-priced back-street shopping, and pungent smells from the vast copper vats of traditional herbalists waft through the tram's open windows before it turns off towards Happy Valley with its forest of pencil towers surrounding race course, bowling green, and cricket ground; all so English, and yet so odd when fringed with palms.

So forget the icy haste of the subway, and instead do as the signs at major intersections suggest: "Give way to trams."

Guests wallowing in the luxury of the Peninsula Hotel used to look out at a colonial mansion atop a neighbouring hill with some puzzlement. Why, when land was being reclaimed for construction from the harbour all around the Kowloon Peninsula, was a low-rise building in an overgrown leafy spot with views across to Hong Kong Island, surrounded by a forest of cranes constructing towers, allowed to go unmolested?

The brick-tiled building, with its deep-set verandahs from the days before air-conditioning, was Hullett House, formerly the headquarters of the Marine Police and built for them in 1881. The main house, stable block and a former fire station and crew quarters at the base of the hill were all under preservation orders and so escaped the wrecking ball. Long abandoned, the site has now been renamed 1881 Heritage and transformed into a mixed shopping complex and boutique hotel with five restaurants that manages to be at once redolent of colonial Hong Kong and of the local obsession with brand-name gewgaws.

From their hilltop viewpoint the Marine Police had a 200-degree view of the harbour, and their own dock down at its wave-lapped base. The sea was moved a block away behind a cultural centre built on reclaimed land many years ago and the front part of the hill has now been sculpted to provide an easy, escalator-assisted journey up past Chanel, Vacheron Constantin and similar boutiques to the restored mansion.

Just as the police kept an eye on the harbour, so the shipping stared back, mainly at the circular white tower atop which a two-metre-wide metal ball was made to slide downwards at exactly 1 p.m., enabling ship captains to reset their chronometers. The tower now stands on a little promontory of its own, and a modern mechanism lets the ball drop at the right time.

The nearby cannon was once used to gain mariners' attention for warnings of approaching gales, the hoisting of typhoon warning flags (whose odd shapes now appear as insets on all Hong Kong's television channels when necessary) and of anticipated wind shifts that might drive ships ashore on the Peninsula or the Island itself.

Tables occupy the shade beneath green awnings outside the ponderous wooden doors of the stable block, now converted to a bar and grill. The high-ceilinged Mariners' Rest bar in the main building has its original fireplace and behind it the jail cells are still intact and open for viewing. Rowdy drunkenness here would be ill advised.

A courtyard at the rear sports the pigeon lofts used for the state-of-the-art communications in the late 19th century. Tables from the Loong Toh Yuen restaurant occupy one side, but a careful recreation of Chinoiserie—Western adaptation of Chinese themes—makes its woody interior with its crackle-pattern screens perhaps the best choice for afternoon tea or subtle, up-market dim sum, right in the heart of the city yet hidden away from its buzz.

The Marine Police must regret their move.