Lanaudiere and Mauricie: authentic Quebec at its best

When I was a girl, I was intrigued by the idea of the "courier des bois" - French Canadian canoeists, woodsmen, trappers and traders of the late 17th and early 18th centuries-who paddled the rivers from New France westward across the continent.
Jun 17, 2011 7:06 AM By: Alison Appelbe 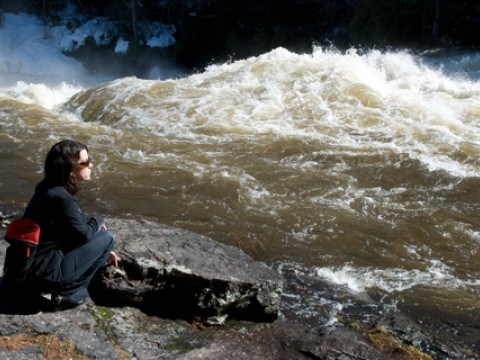 When I was a girl, I was intrigued by the idea of the "courier des bois" - French Canadian canoeists, woodsmen, trappers and traders of the late 17th and early 18th centuries-who paddled the rivers from New France westward across the continent.

Today, in the regions of Lanaudiere and Mauricie, an hour's drive northwest of Montreal and the St. Lawrence River, you can experience the physical landscape, culture and historical reality that nurtured these adventurers of old.

"Authentique" is the French word used to describe these adjacent and lesser-known regions originally dominated by Algonquin and Iroquois; settled by seigneurs (or landlords) on behalf of the King of France, as well as Jesuit missionaries; industrialized by English and French entrepreneurs; and long-time home to large French habitant families.

Lanaudiere and Mauricie-extending from the Laurentian Mountains in the west to Trois Rivieres in the east, and the mill town of Terrebonne in the south to the forest hub of La Tuque in the north, and bisected by the powerful St. Maurice River-is authentic Quebec at its best.

Our little group of adventurers began our visit through what turned out to be a landscape of rivers, falls, hydroelectric dams and lakes-all in full spate-at Terrebonne and Ile des Moulin, a restored mill on a tributary of the St. Lawrence.

According to our guide, in the 1720, local seigneur, Louis Lepage, "saw the river and the great flow if it, and the forest with a lot of pine and lots of oak, and built the first sawmill here." Later fur trader Simon McTavish, of the Northwest Company, bought the mill, and "the river became the road the voyageurs took to the west."

"It's here, in the early 1700s, that it began," the guide added, referring to the early industries of rural Quebec.

From Terrebonne we motored north along country roads suggestive of a simpler era, through towns with names like Saint Esprit, Sainte-Julienne, Rawdon (a longtime immigrant settlement) and St. Alphonse de Rodriquez.

Somewhere along a stretch of Cambrian-like rock, we visited the Bonsai Gros Bec, where owner Robert Smith (though entirely francophone) was nursing some rare and stunted (if appealing) tundra trees back to some kind of bonsai life.

At a small bison farm we learned how a family produces an all-natural product for mostly regional consumption. Then, for something completely different, we slipped into the ultra-modern Trappist monastery, Abbaye Val Notre Dame, nestled into La Montagne Coupee ("cut mountain"), and chatted with a young monk.

That night we stayed at a nearby inn or auberge called La Montagne Coupee and dined sumptuously (the way with Quebec auberges, it seems) while looking out over a series of rolling hills that reach towards the horizon like an ever-fading watercolour.

The next morning we drove east into Mauricie, named after the river that flows into the St. Lawrence at Trois Rivieres. Our day included a picnic at the Parc Chutes de Sainte-Ursula, where converging rivers and falls were in full raging mode.

Near the town of Saint-Paulin, nestles the Auberge Le Baluchon, a sprawling country resort with comfortable lodges, fine dining and full-service spa, a commendable environmental ethic, and a seemingly endless realm of woods and fields, forest trails and waterways through which to hike or amble.

At Le Baluchon's bistro, we tasted a beer, made with rice, from the nearby Brasserie de la Nouvelle France. Later we indulged in a five-course dinner in the resort's fine dining room (this excellent table d'hote meal was $50, before wine, and not out of line at rural Quebec inns-a staggering bargain).

Down at the resort's La Chute aux Trembles, the water, emerging from a canyon, was torrential. Closer to the lodges, framed with boardwalks, the narrower streams roiled and boiled. To reach a rustic cabin with an adventure guide, we had to skirt a flooded lake.

And these tumultuous rivers stayed in my mind as we drove north to a village called Saint-Jean-des-Piles (beyond Grandes-Piles) on the Maurice River.

A traditional breakfast was split pea soup, brown beans in broth, tortiere (with "ketchup maison"), buckwheat pancakes with maple syrup, and the "Cariboo screech" wine the outdoorsman consumed. Then we examined the life of these farm boys and men who, from the 1850s (when they earned $8 a month) to the 1980s, spent the long winters felling and hauling pine over ice roads down to the Maurice River.

The tree trunks were then propelled through narrows and rapids down to the Maurice to the St. Lawrence (and shipped to Britain to make sailing ship masts, until the early 1900s). One can only imagine the river conditions. It was a primitive existence, and this modest "museum" brings a tough-as-nails lifestyle wonderfully back to life.

From Les Piles we drove east through Shawinigan, where the forestry bosses settled, to Trois Rivieres on the St. Lawrence (the "columne vertebrate" of New France).

Statues of the founding fur traders stand in the lovely historic quarter of this second oldest city in North America (after Quebec). Among them is the bronze head of Pierre Gaultier de Varennes-courier de bois, fur trader and western explorer extraordinaire. In the 1730s and '40s, Gaultier and his sons discovered the Missouri River, and were the first Europeans to see the Rocky Mountains.

Little wonder they call the backroads of Mauricie the "Route des Rivieres."