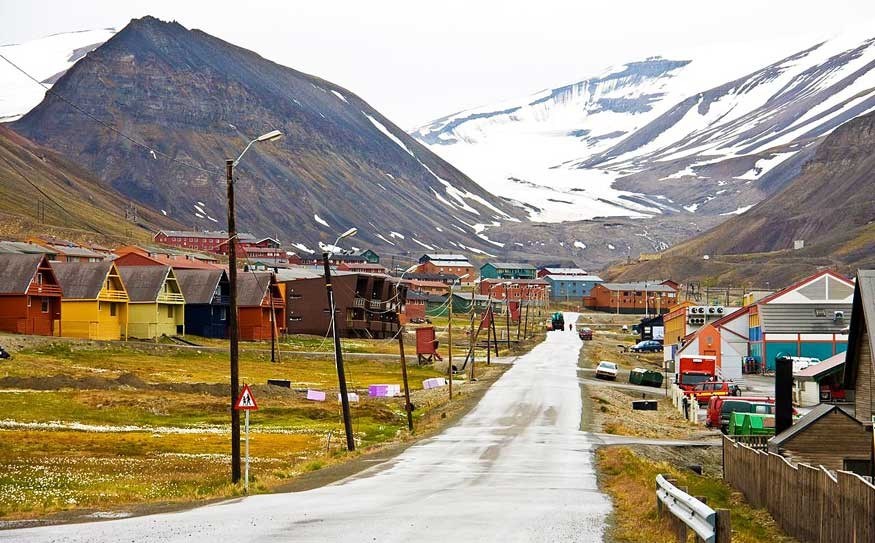 Except for the high-powered rifle slung over her shoulder there was nothing unusual about the young woman wheeling her baby carriage down the main street of Longyearbyen. In almost any other town the gun would have raised eyebrows if not a general alarm – but then Longyearbyen is not your ordinary town. Located on the west coast of Spitzbergen Island at 78 degrees north latitude it is the earth's most northerly town and one of the few settlements where polar bears are of more concern than traffic. Although the big carnivores rarely enter the town it happens often enough to warrant some precautions — a sturdy chain link fence surrounds the kindergarten play area, university students are issued rifles and taught how to use them, and all roads and trails leading out of the town have signs warning people that they must be armed if they venture beyond the town limits. If you don't own a gun you can rent one.

It was early morning when we pulled into Longyearbyen, said goodbye to the crew of the Expedition, and prepared to disembark. From the dock it's a short walk through town to the Svalbard hotel. A well-stocked market in the town centre is surrounded by a scattering of small shops catering to the tourist market. Unlike the rest of Norway there is no value added tax in Longyearbyen, making shopping an option for even local tourists.

The lady with the gun smiled and said hello as we passed and as we approached the hotel a reindeer leapt across the street in front of us and started munching weeds among the acres of snowmobiles parked for the summer. "Who owns the reindeer," I asked the hotel clerk. "Nobody," he chuckled, "they just wander in from the tundra looking for green stuff to eat." You don't need to be in Longyearbyen very long to realize it's not your average small town.

Like many far northern communities Longyearbyen began as a fur trading and whaling centre. But it was the discovery of coal that transformed it from a disorganized, seasonal encampment into a full-fledged town. In 1906 John Munroe Longyear, an American after whom the town is named, established the Arctic Coal Company and began exporting coal to the south. A small community grew up around the industry but living conditions were deplorable. Worker dissatisfaction and frequent strikes forced the company to close and in 1915 the mines were taken over by the private Norwegian company SNSK. The community immediately became a "company town" and until the nineteen-sixties Longyearbyen was completely governed and operated by SNSK. The company owned everything needed for living — housing, stores, communication and transport. Women and children were discouraged and the miners, many of whom were forced to leave families behind, were housed in company barracks.

The change from company town to the progressive community of modern Longyearbyen did not begin until the nineteen-seventies when the Norwegian government took over company shares and the management of the town. Families were encouraged, and in 1975 the new airport opened up year-round communication with the outside world. Until 1990 mining continued to dominate the local economy but most of the mines have since been closed and Longyearbyen has developed into a well-rounded community with a variety of industries related to tourism, scientific research, and higher education. Its 2,000 residents now have access to a modern hospital, primary and secondary schools and a branch of Tromso University. Recreational facilities include a sports centre with a swimming pool, a cultural centre and a cinema. Tourists have a choice of several hotels and museums as well as a selection of local land- and water-based tours. Several research centres, including the NASA facility at Ny-Alesund, the Russian facility at Barentsburg, as well as the Global Seed Vault are all based in the Longyearbyen area.

After checking in at our hotel we spent the rest of the day exploring the town on foot and by local bus. Longyearbyen, Ny-Alesund and nearby Barentsburg each has a road system but they do not connect with each other or any other communities. Before the mines were closed coal was transported by aerial tramway to the port in Longyearbyen. Now abandoned, the massive timber supports of this vast transport system still form a prominent part of the landscape and the town itself still retains many features of its coal-mining past. The bronze statue of a miner in the town square commemorates the town's gritty past, and the neat rows of barracks, though now converted to family apartments, are a reminder of its days as a company town when everything was planned, built, and owned by SNSK.

We had lunch in the Svalbar, a small café/bar with a large deck where the locals gather for a pint or two, and a place to soak up the summer sun. The young woman who served us had an accent I couldn't identify. "Where are you from," I asked, "I'm from Romania," she answered proudly. Like scores of other young people now living in Longyearbyen she has come here because no visa or entry permit is required. The 1920 Svalbard Treaty gave Norway full sovereignty over the archipelago but the citizens of all forty signatory nations were given the same rights and obligations as those of Norway. But, though the wages are high, jobs and accommodation are scarce. Almost all housing is owned by the employers and rented to its employees. Unlike mainland Norway there is no social welfare. Those who can't support themselves can be rejected by the governor.

Without the accustomed rhythm of night and day it's easy to lose track of time and it was almost midnight when we came back to the Svalbar for a nightcap before returning to our hotel. For a brief interval the southern sky turned a pale golden yellow, but the sunset never happened. By the time we had finished our drink the sun was on its way back up and Longyearbyen was at the beginning of another twenty-four hour day of continuous sunshine.

This article is a part of a travel series that took Jack from Scotland to the Norweigan arctic. You can find the others in the series in the Pique on Feb.16, March 1, March 12, April 26, May 24, June 2 and Sept. 20, of this year.