Rapid-testing pilot projects at Canadian airports are among strategies that will be used
Nov 10, 2020 9:32 AM By: Glen Korstrom 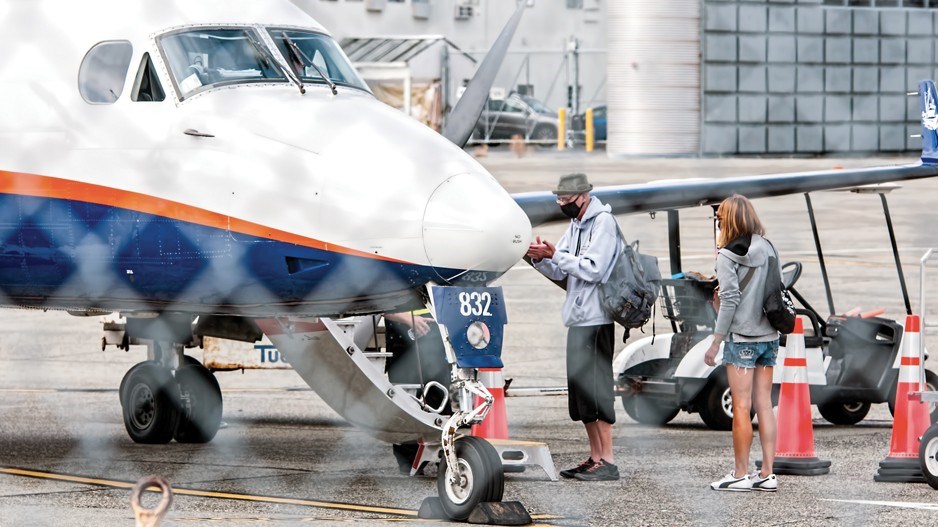 Passengers wait to board a plane on the tarmac at the Vancouver International Airport. The number of passengers arriving and departing at the airport plummeted by almost 85 per cent in September compared with the same month in 2019. Photo by Chung Chow

While new initiatives are aimed at fostering public confidence in flying, the COVID-19 pandemic continues to ravage the air-travel sector.

International travel out of Vancouver International Airport in September fell 94 per cent, to 67,883 passengers, compared with the same month in 2019. When domestic travel is included, overall traffic plummeted 84.6 per cent, to 355,414 year over year.

A return to pre-pandemic traffic volumes could take years.

To give domestic travellers some added confidence that they won’t get sick when they fly, the Vancouver Airport Authority (VAA) and WestJet have partnered to launch a pilot project later this month that will see rapid COVID-19 testing for departing domestic travellers on selected flights within a four-hour period each day. The tests will be performed exclusively on passengers who live in Metro Vancouver, so they can return home if they fail the pre-departure test.

It’s a different initiative from one recently launched in Calgary, between the federal and Alberta governments, to provide rapid COVID-19 testing for people arriving from international destinations. In that pilot project, people who take tests will self-isolate for up to 48 hours, until they get their test result. If the tests are negative, they may leave what would otherwise be 14 days in quarantine.

Sunwing Airlines pilot Barret Armann, who is also president of Unifor Local 7378, said that the B.C. government should have been in the Calgary pilot project.

He wants the project spread across Canada as soon as possible.

Laid-off aviation workers had been able to get $874 per week under the Canada Emergency Wage Subsidy, Armann said.

“Just last week, it was decreased to $573 for furloughed employees,” Armann told BIV on Nov. 3, referring to how Ottawa is shifting many workers to employment insurance instead of designated assistance programs.

“So the employees hit hardest in this pandemic are being weaned off of the government program, and there’s still no [sector-specific] recovery plan. If anything, we should be left at $874 per week until there is a recovery plan in place.”

Armann also wants the government to provide low-interest loans to airlines to ensure that employers can weather the pandemic.

Federal Transportation Minister Mark Garneau said talks on that will take place this week with airline representatives, and that any federal help is contingent on airlines providing refunds to passengers whose flights have been cancelled.

VAA CEO Tamara Vrooman, who assumed her role in July, also believes initiatives are essential to prop up the ailing aviation sector and its workers.

She said she jumped at the chance to head the airport’s operator because it is “an institution that is so vital to the health of our community and our economy.”

One thing in B.C.’s favour, Vrooman said, is that once air travel and tourism start to normalize, the province will be poised to attract tourists because of its natural beauty.

Baby steps in easing travel restrictions across the Canada-U.S. border have already started.

The federal government recently announced that residents in the communities of Stewart, B.C., and Hyder, Alaska—three kilometres apart—can cross the border for food, medicines and other essentials.

Residents in Point Roberts, Washington, however, are still pressing governments to allow them to travel through Canada to get to the U.S. mainland.

“The way you close a border is the exact opposite of the way you open it,” Vrooman said. “So, close it all at once, and quite severely, but then, when opening it, it needs to be measured and targeted.”