Retracing the Wall and its 28-year history

Story and photo by John Masters Meridian Writers’ Group BERLIN—Except for six sections, the Berlin Wall is gone now, torn down in 1990, soon after it toppled along with the Communist East German government that built it.
Dec 1, 2006 8:18 AM By: John Masters 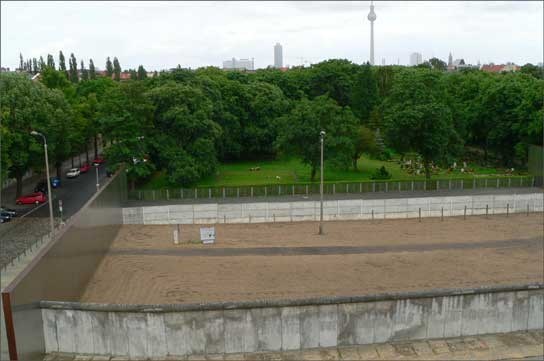 A preserved portion of the wall.

Story and photo by John Masters

BERLIN—Except for six sections, the Berlin Wall is gone now, torn down in 1990, soon after it toppled along with the Communist East German government that built it.

Much of its erratic, 155-kilometre route across Berlin can still be easily traced to see where it divided neighbourhoods and severed arteries. But for most visitors there’s no need to do it all; one short stretch will give you the flavour: Bernauer Strasse.

To get there, take the S-bahn to Nordbahnhof station. The station itself is part of the story: during the 28 years the Wall stood, this was one of 16 ghost stations, sealed off because the tracks ran into West Berlin.

When you exit the station you’re at a right angle where the Wall ran north and east. Walk east along Bernauer two blocks and you reach the Berlin Wall Documentation Center. You can’t miss it, because just across the street is an 80-metre-long section of intact Wall.

The view from the documentation centre observation deck makes clear that this was much more than a simple cement barrier. It began that way in 1961, but over the years it was refined until it was a 50-metre-wide “death strip” that included barbed wire, ditches, floodlights, guard towers, dog runs and a chain-link fence. The last bit, before the cement wall, was open ground to give border guards a clean shot. Hundreds died trying to make it across.

Inside the documentation centre the displays explain how the East German government put the Wall up without warning on Aug. 13, 1961 to prevent any more of its citizens from leaving for freer, more prosperous West Germany. (Some 30,400 people fled from East to West Berlin in July 1961 alone.) The exodus was ruining East Germany’s economy. The government called it the “Anti-fascist Protective Wall.”

In Berlin it followed the quirky boundaries, drawn up at the end of the Second World War, that divided the conquered city into four sections, controlled by Britain, France, the United States and the Soviet Union. It was the Soviets’ section — nearly half of the city — that became East Berlin.

Bernauer Strasse became one of the most dramatic examples of how absurd — and lethal — the Wall was. Here, the dividing line was the street’s south sidewalk. The buildings on this side of the street were in East Berlin, but the moment you set foot out the door you were in West Berlin.

In the early days of the Wall, only the doors to these buildings were sealed, the windows weren’t. People hung and jumped to freedom, or leaped into nets held up by the West Berlin fire department. Some missed the mark and died.

Eventually, the windows were bricked up, then the buildings torn down to make the death strip. Today, most of the south side of Bernauer around the preserved section of Wall is still empty land, unfenced and overgrown, a wound from which the city continues to recover. You can still see the dog runs in places — but now they’re used by people walking their dogs.

For more information on the Berlin Wall Documentation Center visit its website at www.berliner-mauer-dokumentationszentrum.de .

For more information on Berlin visit the Berlin Tourism website at www.berlin-tourist-information.de .