I am always looking for somewhere new to explore on skis. So I was intrigued by descriptions of Rogers Pass written in Chic Scott's book Alpine Ski Tours in the Columbia Mountains and by the tales my friends have told me about touring there.
Mar 4, 2011 9:34 AM By: Yuko Iwanaga 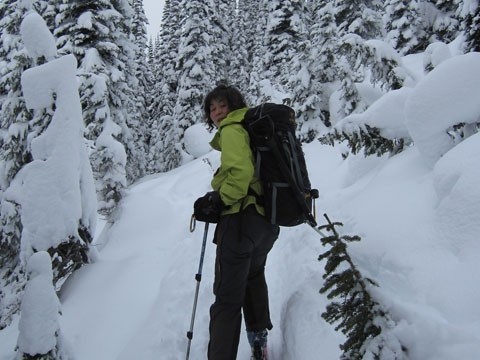 I am always looking for somewhere new to explore on skis.

So I was intrigued by descriptions of Rogers Pass written in Chic Scott's book Alpine Ski Tours in the Columbia Mountains and by the tales my friends have told me about touring there.

Rogers Pass is known as one of the premier ski touring destinations in North America and more and more people from all over the world are visiting to check out the legendary snow, big mountain feel and massive terrain selection.

So it was with some excitement that my husband Glenn and I headed to area recently.

A high mountain pass through the Selkirk Mountains of British Columbia Rogers Pass is used by the Canadian Pacific Railway and the Trans-Canada Highway . The pass is a shortcut across the "Big Bend" of the Columbia River from Revelstoke on the west to Donald , near Golden , on the east. The pass was discovered on 29 th May 1881, by Major Albert Bowman Rogers , a surveyor working for the Canadian Pacific Railway.

It is in the heart of Glacier National Park , in the midst of mountains popular for ski mountaineering , camping, hiking and mountain climbing ever since the region became accessible in 1886. The location has tourist services including the Rogers Pass Discovery Centre, a hotel and National Park services. Rogers Pass is commemorated as a Canadian national historic site.

At Rogers Pass, you have a choice of staying at the affordable Glacier Park Lodge, roadside camping, or in one of several huts in the area. Since it was our first time out in Rogers Pass on skis, we wanted to check out a few different mountains in the area so we decided to stay at the lodge. It is an old but comfortable building with friendly staff, and the quintessential bearskins on the wall and huge stone fireplace. It also boasts a satisfying pub-food restaurant and was a very warm and dry place to stay ... actually it was almost too hot in our room! We had our windows open all night long while it was -20 C outside.

Every morning before we headed out for the day, we stopped at the Rogers Pass Discovery Center  - located in the upstairs of the lodge - to get all the information we needed for the day; up to date snow stability, weather reports, vehicle permits and permits for skiing certain areas.

There are dozens of mountains to ski tour at Rogers Pass. Each day we found a new place to explore in this infinite terrain. One of the places we toured was Balu Pass, in the Bruins area, which starts from right behind the lodge. It's out the back door and start skinning!

It is a nice, open alpine area and depending on how far you go in through this area to do laps the elevation gain is between 760 metres and 1,160 metres.

We did go through some threatening avalanche chutes here and there, so checking avalanche conditions is a must. Though the terrain in some of the ski tour areas is gentle there can be complex avalanche terrain ratings.

It goes without saying that users need to be properly prepared for their backcountry skiing adventure and experienced. Nearly 300 avalanche-related deaths have occurred here in the past century.

Compared to where I usually ski in the Duffy Lake road area, the terrain felt more threatening making me more cautious than usual.

The day we skied this area was very cold, - 27 C. It was so cold I could not move my fingers in my gloves to tighten my ski boots, or take more pictures in this breathtaking area or even sit down for lunch.

We just tried to keep moving. All I ate was a rock hard Pro Bar and chocolate. It's the first time my toes and heels have ever lost sensation in my thermal boots. But the snow we found was awesome, fluffy, amazing powder despite the unusually low snow pack for December.

Another area we checked out was McGill Pass, which starts from 17 kilometres west of Glacier Park Lodge. We parked at the Bostock pullout. But before you go remember to get a winter permit for this area at the Rogers Pass Discovery Center.

This is a great destination for an overcast day. We had lazy starts each day we explored this area so trails were already broken for us like a highway. There were a lot of people but the mountains are so big there were plenty of spots to ski and find your own fresh tracks. Again, depending on how many laps you do, and how far you go, vertical gain is about 1,150 metres or more. Just be careful how you ski out after enjoying the great runs on the chutes from McGill Shoulder. We were aiming to get back on the summer hiking routes that run near the bottom of the valley, but instead we ended up doing some bush-wacking to get out.

Grizzly Shoulder, which starts right behind Glacier Park Lodge, is also worth exploring and is a super-short and an easy day. Vertical gain is 670 metres at the most. After an easy few hours you can do what we did; go back to the lodge and order a big plate of nachos, some beer and then enjoy an afternoon nap.

There are several other beautiful mountains along Rogers Pass to explore. And I know already that this visit was just the beginning for me.

Good guidebooks for this area are: Ski Touring in Rogers Pass , by Eric Dafoe and John Kelly, revised in 2010. You can order this book on the Internet or from local bookstores. This is a good detailed book specific to the area. Another useful book is Alpine Ski Tours in the Columbia Mountains by Chic Scott.