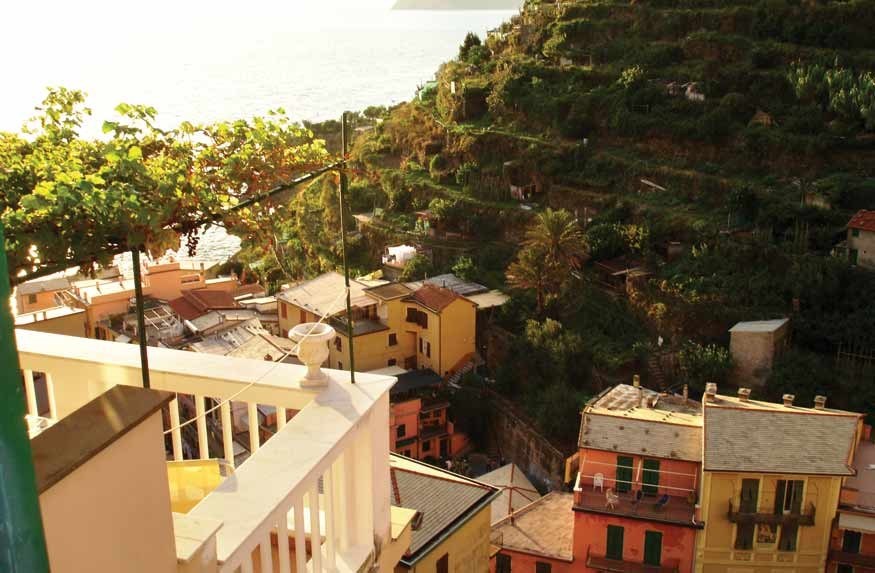 As the mistral wind blew the last of summer's heat from the valley, I stood in front of the window of the studio apartment we'd rented for a week in Provence to watch the approaching storm. Before I fastened the blue shutters I looked across the expanse of lawn, the terracotta tiled homes and row of trees. The famous wind swirled the clouds into a frosty pink and distant hills to murky aubergine.The view had not been on my wish list when I'd booked the apartment through its American owner six months earlier. Then I'd fallen for the interior: white-washed walls, peach tiled floor, blue and white overstuffed sofa, a small but elegant kitchen. The studio was also central to our plans for exploring nearby villages and the Gorges du Verdon. And when we were greeted on arrival with a chilled bottle of wine by the friendly neighbour who doubled as caretaker we were smitten. There are advantages to renting vacation apartments. With your own place you can cook your meals, avoiding the 50 to 100 euros you can easily pay for lunches and dinners. By buying your own food you get to know the locals, even if only for a week. You see, hear, and smell the lives carried on around you. The studio was the cleanest and loveliest in a month of renting apartments in Rome, Cinque Terre, Provence, and Paris. At 220 Euros for six nights (or $306CDN) it was also the cheapest.

The view was not as enticing from our Rome apartment (780 Euros or $1,072CDN for seven nights), where we had started our vacation. It had a narrow view to the opposite building's concrete wall and barred windows. Our bed was a double cot in a mezzanine bedroom. However, located between the Castel Sant'angelo and the Piazza Navona, the apartment was also just steps from trattorias, osterias, galleries and shops in a neighbourhood the painter Caravaggio once claimed as his own. The night we arrived, as we stepped onto the Via dei Coronari, antique shops were closing and osterias opening as lamplights came on. Beautiful young women in stilettos linked arms with equally beautiful young men as they headed out for dinner. It was an inviting, nightly neighbourhood sight we came to love and felt part of during our week there.

Cottage on a Hilltop

"We don't do palatial," the owner said when she met to let us into the fisherman's cottage in Manarola after a thigh-busting grind from the train station to the top of the village, one of five villages that make up Cinque Terre on the Italian Riviera. Size didn't matter. The view was stunning from the hilltop cottage that looked not only over the village and out to sea, but also across to terraced vineyards. All for 80 euros ($116CDN) a night. The downside was the trattoria next door. From 9 a.m. until after 2 a.m. we were inundated with sounds of the busy café. Afternoon naps were out. There were also no cooking facilities in the cottage. But one evening the trattoria owner offered to serve us dinner on our verandah. Hopping over the low fence, wait staff brought us steak, black pasta with scampi, prawns, clams and mussels, and insalata mista. All of this while the sun slid down in front of us with the sky turning a burnt orange and the sea an inky blue.

In Paris the view was across a block-wide courtyard lush with trees, gardens and walkways to three Haussmann-inspired apartment buildings. We had booked a one-bedroom apartment on a side street near the Arc de Triomphe for E850 ($1131CDN) for six nights. But the tub didn't drain and the broken shower door swung alarmingly out over the floor while under the spray. In a comedy of errors, the laundry machine went kaput in the first wash and we hung our clothes to dry from the balcony hoping they wouldn't blow away. But heck, we were in Paris.Like our Parisian neighbours, we bought provisions from the local shops: meat, cheeses and deli goods from the charcuterie downstairs; croissants and éclairs from the patisserie next door; and "Harry's American Sandwich Bread," butter and jam from the nearby grocer. When we left to go home I waved good-bye to the two young men in their shop as we pulled our suitcases behind us. They waved back, one of them calling "à la prochaine." Until next time. I certainly hope so.

When we next rent a vacation home we will be sure to reserve through the owner, rather than with an agency or travel agent: We found the best apartments on our own. The one that owners use as a private getaway was better furnished and maintained than those apartments that were financial investments. Check out: www.vrbo.com and www.holiday-rentals.co.uk.