Shanghai, the head of the dragon China’s most cosmopolitan city has been a cultural melting pot for almost two centuries

From our perch atop the Oriental Pearl the freighters on the Huangpu River below us look like toy boats in a sparkling fairyland of light. On the opposite shore the floodlit buildings of the Bund cast upside-down reflections on the night water.
Nov 9, 2007 1:42 AM By: Jack Souther 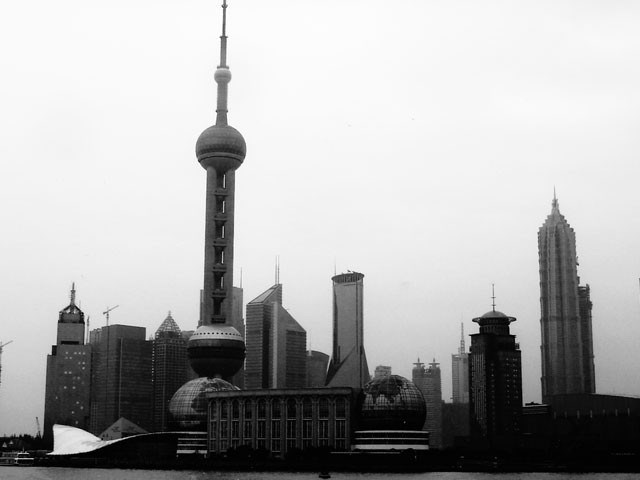 Pudong and the Oriental Pearl tower.

From our perch atop the Oriental Pearl the freighters on the Huangpu River below us look like toy boats in a sparkling fairyland of light. On the opposite shore the floodlit buildings of the Bund cast upside-down reflections on the night water. And beyond the Bund, Nanjing Road cuts a brilliant swath of light through the very centre of Shanghai.

At 461 metres the Oriental Pearl is the highest structure in Asia. We are seated in its revolving restaurant looking down on the skyscrapers of Pudong. Hanson orders a round of Tsingtao beer and we dig in to the gourmet buffet. Rotating slowly above the city we pick out the places we visited during our short visit: the bustling wharves along the river, The Bund, the shops of Nanjing Road, The Old Chinese Quarter, and Yu Gardens. Half way through our meal the view shifts from the Bund, a relic of China’s colonial past, to the Pudong area of East Shanghai where the Jin Mao building, an 88-storey steel and glass pagoda, symbolizes China’s vision of the future. It’s impossible to visit Shanghai without getting caught up in its history. The story of its journey from fishing village to commercial powerhouse is as bizarre as an opium-induced dream.

Only a few years ago the Pudong New Development Zone was still a cluster of farmers’ fields. Today it is the country’s fastest growing financial, economic, and commercial centre. The Jin Mao, which houses the world’s highest hotel, is currently the fourth highest building in the world, but it will soon be dwarfed by the nearby World Financial Centre. When completed this futuristic spire will tower 95 storeys over Shanghai’s bourgeoning East Side. Pudong, which was still on the drawing boards in 1990, is already home to the city’s international airport, the Shanghai Stock Market, and the world’s first commercial magnetic levitation train. The pace of development is staggering, and not just on the East Side. Across the river the face of old Shanghai has also changed and continues to change. In 1987 the city had about 150 high-rise buildings. Today there are more than 3,000. During the late 1990s, at the height of its construction frenzy, an estimated one-fifth of the world’s high-lift cranes were at work in Shanghai. Many are still there.

“If China is a dragon,” said China’s leader Deng Xiaoping in 1990, “Shanghai is its head.” And Shanghai, the head of the dragon, is poised to overtake Hong Kong as the most powerful commercial city in Asia. The Huangpu River, which divides East and West Shanghai, is the shipping artery to the East China Sea and the mouth of the Yangtze River — a vital link between Yangtze ports deep in China’s interior with those of the Pacific margin. The 58 kilometres of wharves that line the Huangpu’s once muddy banks now handle one third of the commercial freight moving in and out of China. But back in the1800s the Chinese dragon was still asleep and Shanghai was little more than a fishing village.

The British were first to notice the potential of Shanghai as a trading port. As the European market for Chinese tea, silk and porcelain expanded Shanghai began its rapid growth. But China wanted little the West had to offer. Faced with a growing trade deficit the British searched for something to sell and they found it in opium. Ships headed for China picked up cheap chests of the drug in India and the more they sold to the Chinese the greater the demand for opium became. Before long the trade balance was reversed. Chinese reserves of silver were depleted and the country faced a crisis of addiction, corruption and drug-induced crime. In a desperate effort to halt the flow of narcotics the Qing government adopted a drastic anti-opium campaign. Illegal stocks held by both Chinese and British dealers were seized and destroyed. The British retaliated with an expeditionary force and in the ensuing Opium War (1839-42) the Qing forces suffered a disastrous defeat. The war ended with the Treaty of Nanjing, which ushered in a century of “national humiliations.” What became known as the “unequal treaties of 1842” opened five treaty ports to British residence, exempted foreign nationals from Chinese law, and levied a huge war indemnity against the Chinese. It also lifted all trade restrictions, including those on opium.

As one of the Treaty Ports, Shanghai was soon carved into foreign concessions. British, French, American, Japanese, and a host others nations staked out a slice of the city, imported their own culture, and imposed their own jurisdiction. Some Chinese continued to live within the old walled inner city but many others moved into the foreign settlements. Initially fueled by the opium trade Shanghai quickly emerged as China’s greatest port. Its hybrid East-West culture attracted entrepreneurs and investment from both inside and outside China. By the 1920s it was known as “The Paris of the East” — a place of glamour, wealth, and degradation where brothels, gambling casinos, and opium dens did business alongside the big names in western banking and commerce. But it couldn’t last.

At the end of World War II and the subsequent Communist takeover in 1949 Shanghai became part of the People’s Republic of China. Cut off from the rest of the world its international trade and freewheeling lifestyle were suppressed by the Cultural Revolution, replaced by the stark uniformity of communism. The door to China reopened a crack in 1972 when Richard Nixon and Zhou Enlai signed the Shanghai Communique. Twenty years later, when the 14 th Party Congress endorsed the concept of a market economy, Shanghai sprang back to life, determined to play a major role on the international stage. The foreign concessions and the opium dens are gone but the vitality, optimism, and romance that defined it before the revolution are more compelling than ever.

Shanghai’s unique blend of eastern and western culture is reflected in the city’s architecture. Sixteenth century Ming pagodas and stately 1920s neoclassical stone mansions are a legacy of the city’s past and, despite the frantic pace of new construction, many of them still exist. On our way to Yu Gardens we walked through the narrow meandering lanes of the old Chinese Quarter where some of the low, pre-1949 houses are still occupied. The Bridge of Nine Turnings led us to the Huxingtin teahouse where we stopped for a snack at one of its round lacquered tables. The five-sided teahouse, with its flared tile roof and red walls, is a mere 217 years old but the nearby Gardens were built in 1559. Protected by dragon-topped walls this island of tranquility in the very heart of the city has miraculously survived the Japanese occupation, the Cultural Revolution’s rampaging Red Guards and Shanghai’s current building blitz.

Even along Nanjing Road, which boasts more than three miles of sparkling new shops and restaurants there are still traces of the old Shanghai. The cobblestones have been paved over but a few of the high-end boutiques along the pedestrian mall still sport the stone and brick facades of buildings that lined Nanjing Road when it was known as Da Malu, the Great Horse Road. We followed it east to the river and turned onto the Bund Promenade, which follows the banks of the Huangpu past stately stone mansions that were once the seats of colonial power. These rock solid European neoclassical buildings with their imposing columns and art deco interiors were once the consulates, brokerage houses, chambers of commerce, banks, and private clubs where foreign power-brokers cut deals and amassed huge fortunes. New tenants have replaced the old traders but the buildings have been faithfully maintained. The Bund, like many other places in this most cosmopolitan of cities, is now a living architectural museum, a slice of 19 th century Europe surrounded by modern China.

I made my way from the Bund to the People’s Square, a large green space in the middle of the city. The Shanghai Grand Theatre on one side of the square and the Shanghai Museum on the other are both innovative ultra modern designs. Here the past is tucked away inside the museum and the view across the square to the shining steel and glass towers of modern Shanghai is clearly focused on the future.