Story and photos by Alison Lapshinoff The sturdy wooden outhouse was of sound construction in comparison to its unruly neighbours. Elevated slightly, its lofty platform faced westward and took in the sweeping panorama that was the moody Indian Ocean.
Aug 18, 2006 8:36 AM By: Alison Lapshinoff 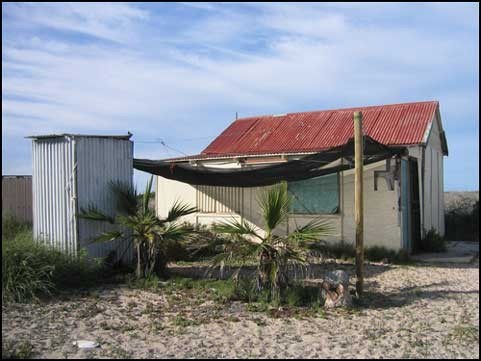 Australia's shantytowns began to spring up along the uninhabited western coastline over 50 years ago.

Story and photos by Alison Lapshinoff

The sturdy wooden outhouse was of sound construction in comparison to its unruly neighbours. Elevated slightly, its lofty platform faced westward and took in the sweeping panorama that was the moody Indian Ocean.

Unlike its developed and commercialized eastern counterpart, the central coast of Western Australia remains wild and rugged; sparsely populated and largely unchanged by the few tourists who venture to cross the nation's scorched interior. Our campsite was not of the conventional sort. Behind the dunes separating us from the wind swept beach, our tent seemed comically out of place. Surrounding us on all sides were dozens of dilapidated corrugated iron shacks erected haphazardly along the coastline. Accessible only by 4WD or small vessel, these shantytowns are a common feature of Australia's west, and their removal remains a contentious issue between the squatters and the state government.

There is no road connecting the town of Cervantes to Lancelin, separated by almost 100 kilometres of officially undeveloped coast, about two hours north of Perth. The conventional traveler can be found a few kilometres inland, traveling south on the Brand Highway.

It was late September, the end of the Australian winter, and the swirling grey clouds promised rain. After passing through Nambung National Park and the Pinnacles Desert we directed our diesel powered Landcruiser toward the labyrinth of sand tracks that head south along the coast. The landscape was remote, desolate and forgotten, and the weather slightly disconcerting after the perpetual heat of the country's north. As we uneasily negotiated the narrow tracks of deep sand cutting through the thick bush, a light drizzle fell. We hadn't any idea what lay along this little visited stretch of coast.

Australia's shantytowns began to spring up along the uninhabited western coastline over 50 years ago when farmers started to push tracks to the beach and set up camps for holidaying and fishing. Commercial rock lobstermen soon followed suit, drawn by the ease of setting up informal operations right on the coast, and the settlements became more permanent. More recently, city dwellers seeking an alternative lifestyle or just a casual, commercial free holiday began erecting shelters. Thus, the settlements grew into sprawling labyrinths of shacks, constructed mostly of corrugated iron and scrap metal, leaning precariously in the ocean breeze.

It was with some surprise that we came upon the Wedge Point Settlement about halfway between Cervantes and Lancelin, one of the largest, built on a sand promontory. Our Landcruiser climbed easily up a massive dune affording a view of the surrounding area, and to our astonishment, spread out below was an enormous settlement of randomly placed shacks dominating a large part of the coast. Although Wedge was deserted at the time, it is thought to house up to 6,000 people!

Needless to say, with the slow growth of tourism in Western Australia, the government wants rid of these places, and has hatched numerous plans for their eradication. Wedge Point is located on 213 hectares of Crown land under the authority of the Department of Conservation and Land Management (CALM), whose policy is to remove squatters. It is flanked by two nature reserves, Nambung National Park and the Department of Defence's training base. CALM regards the squatters as freeloaders using prime coastal land. They allege that their settlements are unsanitary, unsafe and a major cause of erosion and dune degradation. In their place, CALM would like to see picnic areas and caravan parks; towns with suburban standards, street plans, asphalt and lawn. In the late 1980s, a strategy for their removal was implemented. Township status was granted to the settlements and squatters given a six-year leasehold on their property, at an annual cost of $600. With the expiry of their leases, owners were required to dismantle their shacks and relinquish their land to the authorities.

Many squatters have graciously conceded that their time is up and abandoned their shacks, which are then removed or pillaged for material. Others are ignoring the lease requirements and actively campaigning to be allowed to continue their unconventional lifestyle. They argue that their villages have heritage value, use resources conservatively and are environmentally friendly. Meanwhile, CALM is threatening to remove occupied, unleased shacks and charge the cost to the owners.

Our truck crawled through the eerily deserted maze of shelters, seeking the track that would take us out the other side. Our only points of reference were an ice shed and a garbage tip, hastily scrawled on a handwritten map. The place was shrouded in mist and from the thick, swirling cloud fell a relentless, light rain. We were directed through the shantytown by cryptic signs hanging unsteadily on their posts until we finally found ourselves at its southern exit.

Our track followed the coast until it turned inland in order to skirt the Department of Defence's military training area. A large sign warned us of potential live firing exercises and unexploded bombs. We were ordered to keep to the established track and not to touch anything. I found it interesting that, in a country whose interior is almost entirely devoid of human activity, that the army would utilize "prime coastal land" for their drills.

Incidentally, the U.S. government has interest in leasing this land for their own use; an out of the way army base where they can practise discharging their bombs while in reasonably close proximity to the Middle East. But I digress.

Driving the final stretch of this desolate coast was a nerve-wracking race with the tide. As our truck plunged through the deep, wet sand on the beach, the frothy surf playfully lapped at our tires. At intervals, signs were nailed to the trees, adding to our apprehension: 4X4 Wreckage Removal, and a phone number, undoubtedly coming with a high price tag. Although many of Australia's beaches are treated as highways, to become stuck at high tide means a watery demise for your vehicle. Our eyes strained for the beach's next exit as the truck leaned at a precariously unsettling angle. It was sublime relief when we finally found ourselves again on solid ground in the rainy suburbia that was Lancelin.

The government has proposed that a paved road be built between Cervantes and Lancelin. They are also toying with the idea of expanding Nambung National Park to include the land encompassing Wedge Point, a move that would bring an abrupt end to the largest shantytown in the west. Although many may view these places as a blot on the landscape, they are certainly an unique feature of Western Australia. Any that had existed in the past on the east coast have long since been removed, replaced with hostels, resorts, caravan parks and the like.

To many, Western Australia's appeal lies in its remoteness, a final frontier where the outback seems to stretch all the way to the sea and squatters’ rights are still respected. But tourists are a fickle and high maintenance bunch, and as more and more trickle across the vast expanse of the outback to the west, more services will be demanded. And needless to say, Western Australia will comply, bringing the eventual demise of a true coastal wilderness.

Feds extend COVID-19 isolation order for anyone entering Canada until Aug. 31
Jul 7, 2020 2:22 PM
Comments
We welcome your feedback and encourage you to share your thoughts. We ask that you be respectful of others and their points of view, refrain from personal attacks and stay on topic. To learn about our commenting policies and how we moderate, please read our Community Guidelines.