Photo and story by Mitchell Smyth Meridian Writers’ Group COBH, Ireland—Annie Moore and her young brothers Anthony and Philip stand on the pier. Anthony points out to sea while Annie looks wistfully inland, toward the home she’ll never see again.
Oct 13, 2006 3:29 AM By: Mitchell Smyth 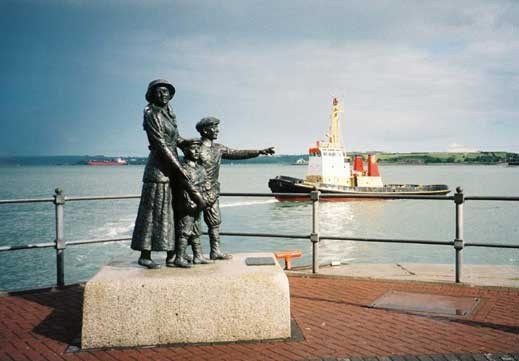 Cork city, was the main port of departure for people fleeing the Irish famine of 1845-50.

Photo and story by Mitchell Smyth

COBH, Ireland—Annie Moore and her young brothers Anthony and Philip stand on the pier. Anthony points out to sea while Annie looks wistfully inland, toward the home she’ll never see again.

Sculpted, life-sized, they’re an icon of the millions of men, women and children who left Ireland in the great emigration in the 19th and early 20th centuries.

This seaside town, the port of Cork city, was the main port of departure for people fleeing the Irish famine of 1845-50, and for the later waves of emigration to North America, Australia and New Zealand.

Through this port passed, in 1848, farmhand Patrick Kennedy, whose great-grandson would, 112 years later, become America’s 35th president. John Ford, evicted from his County Cork cottage, embarked from here in 1847. Little did he know that his son, Henry, would change the face of industry worldwide.

The Moores’ footnote to history is the fact that they were the first emigrants processed through the then-new Ellis Island immigrant centre in New York harbour when it opened January 1, 1892.

Kennedy, Ford and the Moores were just five of the 2.5 million who left from Cobh (pronounced “cove”) between 1791 and 1950, when emigration slowed.

The story is told in “Cobh: the Queenstown Story,” a superb presentation in the Cobh Heritage Centre, on the waterfront just behind the Moores’ statue. (The town was named Queenstown during the period of British rule in Ireland, the years during which the great bulk of emigration took place).

The centre is housed in the former railway station, through which the immigrants passed, from the days of the sailing ships to the great ocean liners of the last century. There are galleries and reconstructions and audiovisuals.

But audiovisuals here doesn’t just mean a slide or video show. As you move through the galleries you hear the sound of rigging stretching, wind whipping the sails, the shouts of the sailors and, pathetically, the cries of the hungry and sick steerage passengers as gale-lashed ocean waves pound a back-projection screen.

One gallery deals with the Australian connection. From 1791 until the 1840s, tens of thousands of Irishmen (and about 9,000 women) were transported to Botany Bay, the penal colony. Some had been accused of political crimes, such as involvement in abortive rebellions, but mostly it was civil convictions, some as trivial as the theft of a loaf of bread.

The museum tells how emigration swelled so that by the turn of the last century more than 1,000 Irish a week were passing through the port in the busy months of April to September. Most took steerage passage, first on sailing ships and later on the ocean steamers, the billboards and posters for which enliven the galleries: the Carmenia , Caronia , Lusitania , Titanic .

The last two ships have sad associations with the town: for the Titanic , it was its final port of call en route to America. The inbound Lusitania was about 15 kilometres off the coast when it was torpedoed by a German submarine in May 1915. Many of its victims are buried in Cobh.

For more information on the Cobh Heritage Centre visit its website at www.cobhheritage.com .

For information on travel in Ireland visit the Tourism Ireland website at www.shamrock.org .

The preserved radio room from the Foynes flying boat terminal recalls the days when this Irish seaport was a major hub of air transportation.

FOYNES, Ireland—As you walk down the main street — pretty well the only street — of this seaside village, it’s hard to believe that it once was as well known to air travellers as Heathrow is today.

From 1939 until 1945 Foynes was a flying-boat port, the first touchdown for the giant Yankee Clippers after a sometimes-hazardous journey across the Atlantic, and the last port of call for passengers before setting off for New York on the westbound journey.

Those heady days are recalled in a museum located, appropriately, in the old terminal building. The building itself dates to the 1860s — it was Foynes’s first public bar. Offshore, in the Shannon River estuary, there’s a placid stretch of water, a perfect “landing strip” for the airborne palaces that crossed the oceans before the days of tarmac runways.

Their story is told in pictures, artifacts and dioramas in the museum, which also includes the radio room of the terminal and — the newest attraction — a full-scale replica of a Boeing B-314 (the Yankee Clipper).

Margaret O’Shaughnessy, the museum’s curator, says the Clippers could carry up to 40 passengers on the transatlantic run. “It was the pinnacle of airplane luxury,” she says. “Every passenger had a bed; the stewards pressed their clothes and polished their shoes; and in the dining room they were served on fine china and drank from crystal glasses.”

Such luxury didn’t come cheap. The round trip fare was $675, about half the price of a small house at the time. The people who could afford it — or could put it on an expense account — were tycoons, movie stars, military planners (the Second World War was raging, but Ireland was neutral) and diplomats.

The museum explains that over the Atlantic there was what the pilots called a “point of no return,” where the captain had to decide if there was enough fuel to complete the journey (this varied according to weather) or to turn back.

One of these aborted flights has a footnote in history. Late one night in 1942 a group of passengers who had taken off from Foynes returned in a rainstorm. In the terminal, chef Joe Sheridan made them coffee and to cheer them up he added sugar and a healthy belt of Irish whiskey and topped it with thick cream. “Is this Brazilian coffee?,” asked one of the passengers. “No sir,” said Sheridan, deadpan, “that’s Irish coffee.”

And Irish coffee it is to this day. And that’s why every fall Foynes sponsors an Irish coffee-making festival, where bartenders from all over the world compete. The prize is handed over by Irish actress Maureen O’Hara, the museum’s patron, whose late husband, Capt. Charles Blair, flew the last flying boat out of Foynes on Oct. 22, 1945 and a few days later flew a land plane into the new Shannon International Airport, across the estuary from Foynes. The age of the transatlantic flying boat was over.

The Flying Boat Museum is open April through October. For more information visit its website at www.flyingboatmuseum.com .