The changing face of Istanbul

From the Eminonu ferry dock in Istanbul's "Old City" it's a short walk to Yeni Camil, the "New Mosque," but in Istanbul the words old and new are relative rather than literate.
Jan 28, 2011 5:28 AM By: Jack Souther 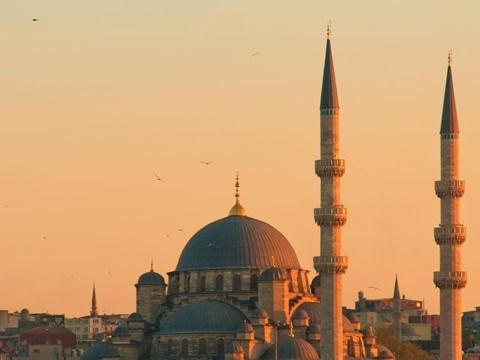 From the Eminonu ferry dock in Istanbul's "Old City" it's a short walk to Yeni Camil, the "New Mosque," but in Istanbul the words old and new are relative rather than literate. The New Mosque was completed in AD1663, a mere 348 years before we visited it in 2010, but more than a thousand years after the Old City was established. It is still called the "New Mosque" but as I stand on its plaza watching the swarm of workboats in the harbour and the turmoil of pedestrian and vehicle traffic on shore, the New Mosque seems very old indeed - an anachronism in the business-driven society of Modern Istanbul. When the evening call to prayer booms from a loudspeaker on its minaret, no one pays any attention. There is not even a lull in the frenetic pace of business on the Eminonu waterfront.

The transformation of Istanbul began in 1923 when Mustafa Kemal (Ataturk) moved the capital from Istanbul to Ankara and made Turkey a secular republic. A benevolent autocrat with boundless energy and an iron will, Ataturk dragged Turkey into the 20 th century and let nothing interfere with his vision of a modern nation-state modeled on the west. The Roman alphabet replaced Arabic script. The European calendar was adopted. Sharia law was scrapped in favor of the Swiss civil code and the Italian penal code. Women were granted equal rights and religion was banished from schools and government institutions.

Since his death in 1938 Turkey's economy has swung wildly through several boom and bust cycles, but through it all Ataturk's vision of a modern, secular, westernized state has been the central tenet of the new Republic. But the country, and particularly Istanbul, are now facing new cultural and economic changes that are equally as challenging as those faced by Ataturk 85 years ago.

I met local tour guide, and long-time Istanbul resident, Baran on the commuter ferry from Sanyer to Eminonu and we talked about the changes that are sweeping over his city. "Look at those apartments up there." He exclaimed as he pointed to the crush of new buildings on the slope above the Bosphorus. "In the last fifty years the population of Istanbul has gone from one million to more than twelve million and we are running out of room to build new housing."

Ahead of us the Bosphorus suspension bridge, the 16th longest in the world, connects the Asian and European parts of the city. "When it was built in 1973," Baran tells me, "you could drive across in twenty minutes. Now, with all the traffic, it can take a commuter two hours," he pauses and adds with a sigh, "and the crowding is causing social problems as well. Every year 300,000 new residents are moving into the city. Long time residents feel threatened and as different neighborhoods compete for space there is resentment on all sides. Many of the immigrants are poor villagers from rural Anatolia who are looking for work. They are competing for living space with wealthy investors who are attracted to Istanbul's booming economy and have come to buy and develop the land. But," he adds with a shrug, "the tourist business is good and most visitors aren't even aware of our problems."

Indeed, Istanbul's tourist industry is doing very well. The number of visitors this year is expected to exceed the 26 million who came in 2009 and most of them will end up in Eminonu at some time during their stay. I said goodbye to Baran as we slipped under the Bosphorus Bridge and turned toward the dock.

Located at the south end of the Galata Bridge over the Golden Horn, Eminonu is a major transportation hub and upscale shopping district. Its dock is the main terminus for passenger ferries on the Bosphorus and Marmara Sea. Buses, trams and trains, both local and long distance, begin and end their journeys here, carrying commuters and tourists to destinations throughout the city and beyond.

Until 1961 it was the terminus of the Orient Express, a train steeped in the glamour and intrigue of Agatha Christie spy thrillers. The trip from Paris took three and a half days (provided the train wasn't held up by bandits or stalled in a snowdrift) and if there were delays the carpeted cabins with leather armchairs and gas-lit chandeliers provided all the comforts a gentleman could desire. But that was a different era. Despite its extravagant luxury the Orient Express could not compete with air travel and today the only trains using Eminonu's Sirkeci Station are on short-haul domestic routes. Istanbul has become an ultra-modern jet-age city.

From the dock we walked across the plaza, past the "New Mosque" to a high brick archway leading into the Egyptian Bazaar, known also as the Spice Market. The Mosque and Bazaar are part of the same complex. Both were built at the same time, around AD1660, but while the Mosque now stands empty for most of the week, the Bazaar teems with action as buyers and sellers, both tourists and locals, haggle over the price of everything from souvenirs to cinnamon. Merchants shoo pigeons away from colourful piles of ground spices, displayed in their kiosks just as they were in the 17 th century when the "Cairo caravan," a flotilla of ships from Egypt, began regular deliveries of spices and coffee to the market.

From Eminonu we took a bus to the Grand Bazaar at the centre of Istanbul's vast Bazaar quarter. Located in the Old City about midway between the Golden Horn and the Marmara coast this granddaddy of all shopping malls began trading a few years after the Turkish conquest of Istanbul in 1453. For centuries it was the financial hub of the Ottoman Empire, the place where buyers and sellers from three continents came by camel caravan and boat to do business. In 1461 Mahmet the Conqueror built a massive stone enclosure, the Old Bedesten, around the first few dozen shops. It still stands at the centre of the Grand Bazaar but the market now sprawls over a full city block. It includes more than 4,000 dazzling shops and the whole thing is covered and brilliantly lit.

We spent about an hour wandering through its labyrinth of narrow passages, poking into shops selling everything from antique hookahs to modern cell phones. Vendors hocking glittering knick-knacks and tacky souvenirs compete with chic boutiques offering the latest in high fashion apparel. You can barter for almost anything in the Grand Bazaar but the crush of people is wearing. An hour was long enough.

It's a short bus ride from the Grand Bazaar to Kumkapi, the site of an ancient fishing village on the Marmara coast. Located just inside the old city walls, its cobbled streets are now lined with seafood restaurants and outdoor bars. We arrived at dusk and as the lights blinked on, the tables were already filled with diners - a few tourists but mostly locals out for a night on the town. The food was excellent, the beer and wine plentiful, and as the evening wore on the party soared. Groups playing western jazz and traditional fasil music roam between tables and, not to be outdone by the belly dancers inside, young women in mini-skirts kick off their high heels and perform tabletop dances to the cheers of their friends. It was a riotous evening of booze and fun and I thought; "Too bad Ataturk, the guy who started it all, can't see this." He is reported to have been a tireless party man - he would have had a ball.