The Los Cabos dichotomy: The southern tip of Baja California has been transformed from desert to luxury destination

In 1521 Hernan Cortez and his army of Spanish conquistadors vanquished the last of the Aztec emperors and began their systematic looting of New World treasures.
Apr 10, 2009 9:30 AM By: Jack Souther 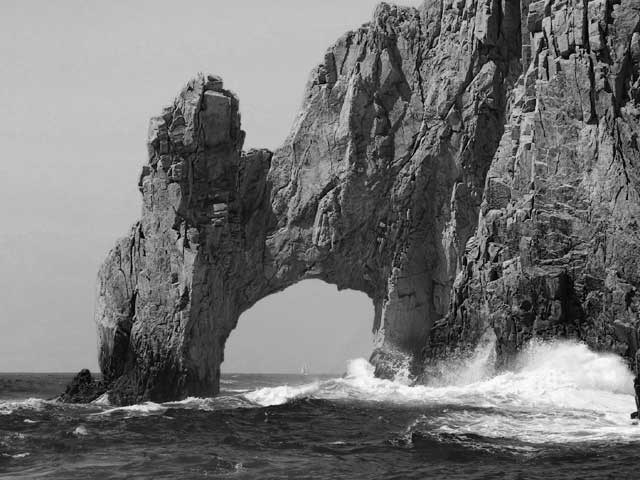 In 1521 Hernan Cortez and his army of Spanish conquistadors vanquished the last of the Aztec emperors and began their systematic looting of New World treasures. But the lust for even more riches was fired by rumours of a "golden land" beyond the shores of western Mexico. The fabled Island of California was said to be ruled by a tribe of beautiful dark-skinned and lonely women adorned with gold. Determined to get his hands on both the girls and their gold, Cortez dispatched an expedition to find the Island in 1532. But alas, the rumours proved to be flawed. To begin with, the island turned out to be a peninsula, and far from being welcomed into a lush golden land the conquistadors found a parched and barren place inhabited by very unfriendly stone age folks who killed as many of them as they could and sent the rest packing back to where they came from. And so began the Spaniard's long and largely futile struggle to incorporate Baja California into their New World Empire.

Bounded on the east by the Sea of Cortez and on the west by the open Pacific the narrow sliver of land that forms Baja California extends for 1,250 km, from the U.S. border south to Land's End where the two oceans meet. It's a five hour direct flight from YVR to San Jose airport near the southern end of the peninsula and as I watch the brown, brush-covered mountains slip past I wonder why the Spanish, or anyone else, would want this place. But, surprisingly, Los Cabos, the strip of coastal desert near Land's End, has become one of the most rapidly expanding tourist destinations in all of Mexico.

The key to this transformation is water but the annual rainfall of about three centimetres is barely enough to keep the native cactus alive. For decades the resorts have relied on well water to fill their swimming pools and water their golf courses but the aquifers are being sucked dry and new resorts continue to be built. "We need another hurricane to recharge the wells," says Luis. "We're still using water from hurricane Juliette that brought the big rain of 2001." But hurricanes are both destructive and unpredictable and the resorts are becoming increasingly dependent on desalinated seawater. No matter where they get it, water is all that keeps the artificial world of Los Cabos from reverting back to desert.

It was deep sea fishing that brought the first wave of tourists to the area back in the 1960s. The fishermen were followed by golfers and along with the golfers came thousands of sun-seekers who are content to just lounge at pool-side and absorb margaritas. The "Corredor Los Cabos," a 20-mile strip of coast between the towns of Cabo San Lucas and San Jose del Cabo caters to them all. The marina at San Lucas is crowded with charter boats for the marlin fishermen, golfers can choose from a dozen different courses totalling 144 holes, and sun-seekers can find an artistically landscaped pool with a swim-up bar at any one of the multitude of luxury hotels along the strip.

We checked in to the Melia Cabo Real, a five-star all-inclusive hotel about midway between San Jose and San Lucas. Its 300 rooms, five restaurants, three bars, and multi-lobed pool offer guests the ultimate in decadent luxury. Eating, drinking, and exposing as much skin to the sun as Mexican law condones are the principal activities. But there is also a well-equipped gym, an 18-hole golf course, and a small swimming area behind a breakwater in the ocean. Unfortunately the red flag signalling that swimming in the ocean is unsafe flapped wildly in the wind during our entire stay. It was an unnecessary warning. One look at the pounding surf and vicious undertow was enough to send any prospective swimmer back to the pool.

Unable to swim in the ocean and having limited tolerance for roasting in the pool-side sun we elected to explore the rest of the corridor. The local bus along Highway 1 runs more or less every half hour and it's a mere 17 pesos (about two bucks) to go from the Melia Cabo Real to either San Jose or San Lucas. According to our map there are 41 other luxury hotels and countless condominium complexes scattered along the corridor. The road winds in and out of the coastal hills, one moment skirting a green, palm-lined golf course and the next surrounded by desert with nothing but cactus scattered among the brown, withered shrubs. I am surprised at how many condos are unfinished. Their windowless concrete shells, stacked one on top of the other, resemble the ruins of some primitive civilization. No one seems to be working on them.

At San Jose del Cabo we leave the bus and walk down Manuel Doblado toward the centre of town. The narrow crumbling sidewalk skirts tiny cluttered shops that spill brightly coloured merchandise and canned music from their open fronts. We squeeze past groups of people waiting for the local bus or gathered around the TV at a roadside bar. This is part of the old town, a slice of laid-back Mexico that has been relatively unchanged by the tourist boom. San Jose is where much of the local work force lives. The people who spend their days in the surreal world of the tourist strip return here at night - to their families and their Mexican roots. But even San Jose has its tourist attractions.

At the bottom of the hill, where Manuel Doblado joins Blvd Mijares, San Jose's central plaza is shared by both locals and visitors. A full-scale replica of the twin-towered Iglesia San Jose overlooks the square. The original mission, built by the Jesuits in 1730, was part of a plan to convert the rebellious Pericu natives to Christianity. But European diseases intervened and by the late 1700s there was no one left to convert. Although the spotlessly manicured Plaza Mijares is where the tour busses stop the tiny park, surrounded by colourful historic buildings and traditional craft shops, retains much of its traditional Mexican charm. It's a place where young families bring their kids to play while their parents relax on one of the benches beside the fountain and watch the gringos.

While San Jose is still a town for Mexicans, San Lucas, at the other end of the Corridor, is strictly for tourists. The two towns are as different as tabasco and ketchup. Our bus dropped us at a glittering jewelry shop where uniformed clerks handed us a shot of almond tequila before showing us their wares. Across the street a large sign on Mr Bee's Playmore promises "High energy! Bingo, Betting, and Booze." It is next door to the "Hangover Bar and Grill." San Lucas is the quintessential party town - a place of glitz and glamour, gated luxury hotels, nightclubs and elaborately landscaped private villas. Almost everywhere someone is busy grooming the place - raking the sand, pruning the gardens and polishing anything that will take a shine. This is where the locals come to work but not to live.

We decline to buy any jewelry, thank the clerks for the tequila, and head down to the marina in search of a boat trip out to Land's End. Roberto's tiny glass-bottomed boat looks out of place among the glistening white luxury yachts crowded into San Lucas's inner harbour. But the sea is calm and Roberto's enthusiasm infectious. We tie on our life jackets and chug out of the harbour. Back in the days when the Spanish were still trying to figure out how to occupy the peninsula this harbour was a refuge for pirates who lay in wait for Spanish galleons returning to Mexico from the Orient. The heavily laden ships, manned by exhausted crews and running low on food and water, were easy prey for the privateers, including the notorious Francis Drake.

On our way out to Land's End we pass groups of pelicans preening themselves and a colony of sea lions jostling one another for resting spots on a rocky ledge. The sea beneath Roberto's glass bottom boat is teeming with fish. We swing out past El Arco and the sea stacks at the very tip of Land's End. From here, looking north along the coasts of two converging oceans, the synthetic world of the Los Cabos Corridor, with its luxury resorts and imported palm trees, seems to disappear among the hills of the desert - a landscape as parched and barren today as it was when Hernan Cortez came here in search of gold almost 500 years ago.